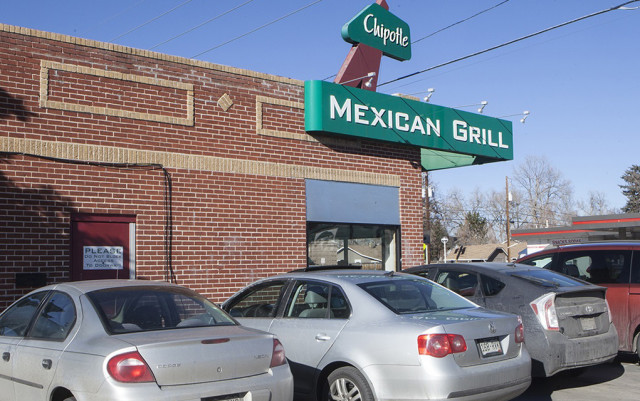 In search of a document lost in the recesses of the basement, I frittered away an hour looking through my “archival” bins of Colorado cookbooks and food books. There in the dust was More Adventures in Eating: Denver’s Ethnic Restaurants, self-published by Susan Permut in 1994. This was before Google, selfies, cell phones, Yelp and GPS, and the information in this volume was otherwise unavailable to foodies, known at the time as “gourmets.”

The handful of local eateries in the book still open after all these years later include The Med, Ras Kassa’s (now at the Broker Inn), and Lucile’s in Boulder; the Blue Parrot in Louisville; and Efrain’s Mexican Restaurant in Lafayette.

Also still in business is a Mexican restaurant that Susan Permut described as a taqueria of a new kind: “It has a high tech feel with metal sculptures and industrial-looking fixtures. The fajita burrito consists of a huge tortilla filled with a choice of marinated and grilled meat. Everything here is fresh and homemade (including) barbacoa, shredded beef braised with chipotle peppers, cumin, cloves and garlic.”

If you had asked me which of Denver’s multitude of restaurants was bound for fame in 1994, I would not have included this eatery near the University of Denver. You can still visit the cramped, former Dolly Madison Ice Cream, shop where the inaugural burrito was wrapped in foil at Chipotle Mexican Grill, 1644 E. Evans Ave., Denver.

Order at the counter, take a number
Kentucky has a Bourbon Trail. Indiana has a Hoosier Pie Trail. Louisiana has the Cajun Boudin Trail and New Mexico markets its Green Chile Cheeseburger Trail. Whither Colorado?

Besides the Brewery Tasting Room Trail and the Natural Foods Epicenter Trail, Colorado boasts the Fast Casual Mothership Trail, which takes visitors on a munching pilgrimage to the original sites.

Fast casual cuisine — halfway between fast food and casual dining a la Applebees — is generally better-for-you, fresher fare, ordered (and personalized) at the counter and delivered to the table. Some pundits credit Colorado’s large millennial population for the rise of fast casual, but the credit really goes to Boomer parents like me. Twenty years ago I immediately understood the appeal of macaroni and cheese (with obligatory add-ins: broccoli and chicken) while dining with a toddler at one of the nation’s first Noodles & Company, 1245 Alpine Ave., Boulder.

We take the abundance of eateries here for granted, but culinary professionals travel to the Denver metro area specifically to research the cutting edge of fast casual dining — the fastest-growing part of the restaurant industry, according to the market research firm Technomic. They visit chains born or headquartered here including Tokyo Joe’s, Larkburger, MAD Greens and Garbanzo Mediterranean Grill. There are many other examples and variations.

The Tour de Fast Casual
The original Pizzeria Locale that inspired the chain opened next to its Italian parent, Frasca Food and Wine, at 1730 Pearl St., Boulder. I recommend the salsiccia bianca pizza with fresh mozzarella, fennel sausage, broccoli rabe, smoked scamorza and garlic.
You can order a superfood salad with spinach, quinoa pilaf, grapes, feta cheese, carrot, almonds and champagne vinaigrette at the first Modern Market, originally opened in Boulder as Modmarket, at 1600 28th St.

Although not strictly fast casual because there is no indoor seating, the Good Times Burgers & Frozen Custard chain was born in Boulder at 2050 26th St. The chain is a descendant of the late, local Round the Corner Restaurants.

Quiznos was launched in 1981 at 1275 Grant St. in Denver’s Capitol Hill neighborhood by chef Jimmy Lambatos The toasted sandwich chain now has hundreds of locations in the U.S. and internationally including Guyana. The original, very cramped location brags about its first-in-the-nation status. The pickle and pepperoncini bar is still free with every tuna melt.

The first Smashburger opened in 2007 in an inconspicuous strip mall at 1120 S. Colorado Blvd., Denver, but the concept originated at Icon Burger, 2755 Dagny Way in Lafayette. That location is now one of hundreds of Smashburger locations in the U.S. and several countries.

With its bright retro-Jetsons design, Snooze was born brunching in 2006 in Denver’s Ballpark neighborhood at 2262 Larimer St., dishing pineapple upside down pancakes and chilaquiles Benedict. Now there are 13 Snoozes in California, Arizona and Colorado.

Taste of the week
I took a workday Saturday respite at Katsu Ramen, 1930 S. Havana St. in Aurora, where the non-sushi side of Japanese cuisine shines. I’m serious about condiments so I appreciated the fact that chile oil, gyoza sauce, soy sauce and rice vinegar were already on the table. As an amuse bouche/banchan they sent out some little tastes including green onions with red chile. Lunch included three components. First were gyoza, dumplings properly pan-seared on one side with my composed salty, spicy dip. Next, a small bowl of katsu don, breaded pork cutlet with eggs, sautéed onions and a slightly sweet soy sauce. I was warmed by tan tan spicy chicken ramen in a rich broth full of noodles, bright baby bok choy, a hardboiled egg and chopped green onions with a serious red chile oil slick on top that was a palate perker-upper.
Katsu Ramen shares a strip mall with the English Teacup, a Central Asian bakery, a Korean restaurant and a 7-11.

Words to chew on
“I am thinking of the onion again. … Not self-righteous like the proletarian potato, nor a siren like the apple. No show-off like the banana. But a modest, self-effacing vegetable, questioning, introspective, peeling itself away, or merely radiating halos like ripples.
— Erica Jong, “Fruits and Vegetables”