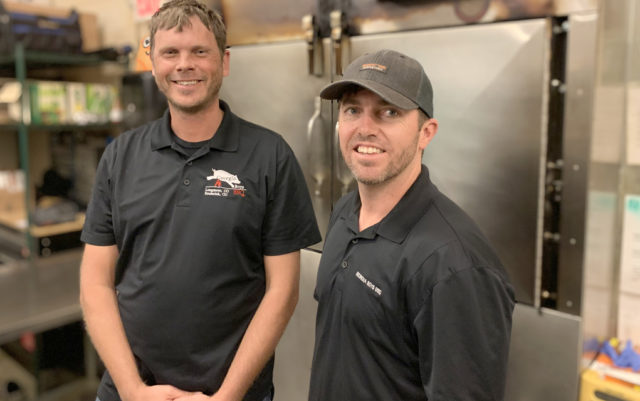 We’re talking over a plate of burnt ends at Georgia Boys’ Longmont outpost. It’s the fatty end of a brisket and after sitting in a dry rub and being smoked for hours, it’s fall-apart tender, and the crispy, smoky bark is undeniable.

“The brisket we’re eating today, we started that two or three days ago,” says Matt Alexander, the other Georgia Boy.

Brisket was a late addition to the Georgia Boys’ lineup. It wasn’t cooked in the smokehouses and backyards of Georgia, where they grew up and learned to barbecue. Smoked meats in the Peach State borrow from a Memphis dry-rub tradition, and you’ll find mostly pork, chicken and sausage at barbecue joints down there.

“People out here weren’t used to dry rub,” Reckinger says of coming to Colorado over a decade ago. “We’re doing traditional Southern, where the meat’s got nothing to hide. It’s why the sauce is always on the side.”

The recipes on the menu today at Georgia Boys haven’t changed from what they learned growing up and tasting around Georgia… for the most part.

“It’s exactly the same,” Reckinger says. “I mean, burnt ends, you still won’t find down in Georgia, but everything else, we’re pulling from family recipes, popular recipes down South. All of our sides are scratch-cooking.”

Banana pudding, sweet potato casserole and green bean casserole are direct replications of family recipes while other sides like mac and cheese, smoky baked beans and chicken corn bread dressing are the amalgamations of their experiences eating barbecue on the regular growing up.

That commitment to staying true to Southern cooking is likely why Reckinger and Alexander outgrew their first Longmont operation (in a shack) and expanded to Frederick, with tentative plans for more restaurants.

They’ve developed their own kitchen secrets — each meat has its own rub, which differs from other barbecue spots that tend to use one universal rub for every meat. It’s understandably hard to pry the trade secrets from the Georgia Boys, but here’s one: the brisket is rubbed with cocoa. Of course there are a million other secrets to figure out if you want to replicate Georgia Boys barbecue; maybe ask Day Hayward at Savory Spice Shop, who provides the restaurant with all its spices and herbs, but it’s doubtful he’ll tell you either.

Besides, what might be the real secret to Georgia Boys’ success is their commitment to hospitality. Reckinger says he passed on the “five and 10 rule” to staffers: if someone’s within 10 feet of you, smile, if they’re within five, say hello. Reckinger and Alexander believe the key to transplanting not only Southern cooking but Southern hospitality is by keeping the staff happy: They’re one of the few restaurants in the county that provide full benefits to staff members.

“We’ll take care of the employees, and that kind of translates to the customers as well,” Alexander says.

From Georgia to the Rockies

Alexander and Reckinger met as frat brothers at the University of West Georgia. They independently moved to Colorado, but stayed in contact and eventually moved into an apartment together in Gunbarrel. When they were both laid off during the Great Recession within weeks of each other, they turned to their roots in meat to make ends meet.

“I certainly miss the excitement in the beginning days,” Alexander says, looking back. “It was working 14 hours… didn’t even feel like you worked 14 hours. It was super exciting.”

For three years, Alexander and Reckinger stealthily built a barbecue business, cooking batches in the courtyard of their apartment complex, setting up shop at Left Hand in Longmont and Upslope in Boulder, and dropping off bagged sandwiches to workplaces at lunch time. Eventually they drew the eye of Boulder County code compliance, but by then they had built a reputation and were able to invest a paltry (by today’s standards) $16,000 to lease and outfit a shack in Longmont.

They spent that $500 on food, and thanks to some luck and the reputation they had built, there was a line out the door on day one. They borrowed picnic tables from a business up the street until they could afford their own. They relied on friends and part-timers to keep meat smoking on their days off. They found innovative solutions in the “gray area” of code compliance until they could get in line. They were quintessential bootstrappers.

“Black market barbecue turned into real barbecue with a ask for forgiveness, not for permission approach to things,” Reckinger says.

1. Rub the pork butt with salt, pepper, spices and brown sugar — “Coat it on there,” Reckinger says. Place in refrigerator for 24 hours.

2. “Start early in the morning. Have a couple of beers… not too many because it’s a long day,” Reckinger says.

4. Place pork butt in smoker and don’t open the lid. Cover any holes emanating smoke with tin foil. “Invest in one of those little thermometers that’ll go in the smoker,” Alexander says, so you don’t have to open the lid.

5. When meat reaches 198 degrees, pull it from the smoker, put it fat side down on a chopping block and give it a good whack, and “it should just break apart and then you’re good,” Reckinger says.

Tips from the Pitmasters

• Use wood chunks instead of wood chips.

• Move the smoker vent to the side opposite of where the smoke enters the chamber — this ensures the smoker stays an even temperature as it moves through the tub.

• Start your foray into smoking meat with pork butt, ribs or chicken — save brisket for when you have a few smokes under your belt.

• Bone-in meat keeps the pork butt together and adds flavor.

• Really, don’t open the smoker while the meat’s in there.

• Soaking the wood chunks in apple cider vinegar or water increases the smoke in the chamber.