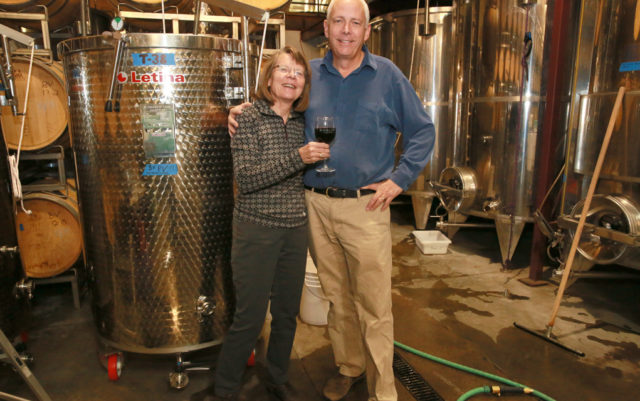 Boulder County’s foremost winemakers knew growing fruit wasn’t easy when they started Bookcliff Vineyards in 1996. Two bad growing years had imperiled the livelihood of a peach farmer in Palisade from whom they were buying land for a vineyard.

“The grapes weren’t damaged but there were late frosts and they lost the peach crop,” says Bookcliff co-owner Ulla Merz. “We just had six acres and leased back the original peach orchard to the person we bought it from. I saw him come through and he constantly checked the fruit, whether it had died, and I could see the stress on his face.”

John Garlich, Bookcliff co-owner and Merz’s husband, says it’s a unique relationship between grape growers and peach (and apricot and cherry) growers over in Palisade. Because most fruit trees bloom earlier than grapevines, growers need to be more vigilant protecting them from the elements.

“Peaches aren’t a slam dunk,” Garlich says. “Peach guys are always envious that we don’t have to get up in the middle of the night and turn on fans [to keep frost off].”

Merz says the peach grower lost three-quarters of his income that year; an opportunity for savvy business people like Merz and Garlich.

“That’s when we always bought land was in the spring when they’re all nervous and want to hedge their bets,” Garlich says, half joking.

Now, Garlich and Merz own four growing plots in Palisade, having bought the last plot when the harvest tanked in 2013-14 (what goes around, comes around). In those seasons, the only vineyard that really produced for them was one they rented. It represented a combination of luck, intuition and savvy that has propelled Bookcliff to the top of Colorado’s burgeoning wine scene.

Surely they learned some of that business savvy in their previous lives — Merz has a doctorate in computer science and worked for IBM before “retiring” to the vineyard a few years ago. Garlich was a structural engineer, working on such projects as the Denver International Airport and the Colorado Convention Center, before moving to the wine operation full-time a few years before Merz.

Garlich admits they were “lucky” at the beginning. A realtor who helped them pick vineyards in Palisade happened to have a relative who was a member of the USDA extension and had a “secret map,” on which all the good plots of land for growing were listed. Merz, having never purchased vines before, made the rational decision to bring in the highest grade vines available. And even though neither had worked on a large agricultural farm, it worked.

“We were very lucky,” Garlich says of the first season. “We thought we were geniuses, but the next time we planted, which was the next year, they didn’t do half as well. Little things make a big difference.”

Merz and Garlich relied on the help of the ag extension, local farming resources and farmers (whom Merz said were like family in the early days), books and good old fashioned trial and error. It was the culmination of two lives that slowly acquired passions for wine.

“Growing up, my family had wine maybe twice a year for the holidays,” Garlich says. “Our neighbors always made wine in their basement. It always intrigued me, the whole process. After graduating and starting work, [Ulla and I] starting enjoying wine a lot and traveling to these regions and kind of caught the bug.”

Merz grew up in a small wine-producing region of Germany, though she admits the “majority of the wines were unimpressive.” Yet, Merz sees parallels between that region and Colorado’s growing scene. The state has yet to pin down what exactly it grows best — cabernet franc and malbec are early favorites — and there’s only been about three generations of winemakers in Palisade; Garlich and Merz consider themselves of the second generation. But Merz says the culture around Colorado wine still lags behind the quality of the wine, and it’s holding back the industry.

“It was important that they were doing well, and we were proud that they had a good harvest,” Merz says of the modest wineries in her hometown. “But that was the only thing that was served when you went into a restaurant … or the store there. You get indoctrinated from the start, and you’re proud of that industry. It’s not the case here — nobody is proud of Colorado wine.”

And yet, the wine is good. Garlich says he brings wines to whichever tastemakers are willing to try it — wine sellers, chefs, media members — and that in blind tastings, Bookcliff’s offerings are overwhelmingly popular.

“We just have to start chipping away at it,” Garlich says. “California back in the day had the same issue. Back in the ’70s I remember Robert Mondavi traveling around with his sons and he’d do the same thing with blind tastings.”

Garlich believes Colorado can gain the reputation that California enjoys, even if it doesn’t have the quantity of growing spaces California has. Chipping away at that perception includes hosting dinners with local chefs Bradford Heap, Eric Skokan and Kelly Whitaker at Bookcliff, and putting Bookcliff wines into Salt, Black Cat, Basta and more local restaurants.

It really comes back to supporting local businesses, Merz and Garlich say. Merz says more local restaurants simply need to put more Colorado wine on their menus — to give people a chance to taste the state’s offerings by the glass instead of what tends to be bottles priced higher than average due to the company’s limited production abilities. Garlich adds that maybe 10 producers total supply Colorado liquor stores and restaurants with wine — it’s a conglomeration much like the beer industry is now facing. Couple that with the environmental toll of shipping wine overseas, and drinking local wine, even if it’s “all the way from” Palisade, is a beneficial thing to do on multiple fronts, Garlich says.

Bookcliff also faces the challenge of operating out of an industrial complex in North Boulder. Common perception of a winery is that there are, you know, vines and rolling hills, not beige storefronts and a laundromat. They’re looking to relocate, possibly slightly east given population trends, but their location and whatever offerings they have in their winery is secondary to what will sustain the Colorado wine industry’s growth.

“We’d like to make a mark on the wine world in terms of what can Colorado do,” Garlich says. “That’s our goal: to succeed just by having good wine.”