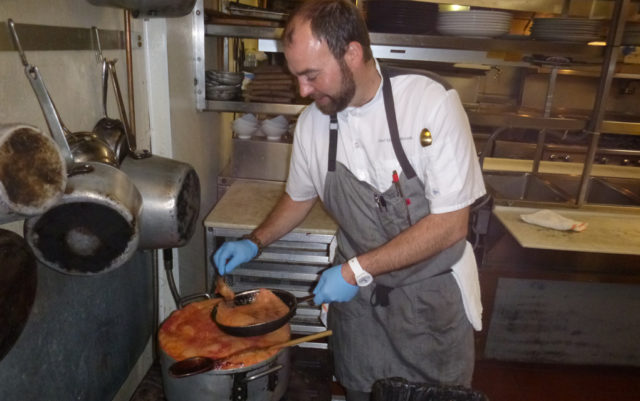 Even empty, The Greenbriar Inn north of Boulder feels cozy. The putting-green carpet, the old maps of wine regions, the dark wood and soft leather — it all coalesces to feel like a hug from an old friend. As in, a friend who is actually old.

Phil Goddard has been around the Greenbriar for more than half of its 51-year existence. “I love this place,” he says, as we walk through the empty dining room. Before I even ask a question, or say one word about the pros and cons of Greenbriar’s longevity, Goddard is escorting me to the kitchen to show me how bright the future is at the restaurant. On the table, tubs of fresh-picked fennel, spring onions and chives, so beautiful, crisp and green they look fake. Soon, over 70 percent of the restaurant’s produce will be culled from the onsite gardens, Goddard says. That’s happening nowhere else in the county.

Goddard is eager to introduce me to Martin Woods, the executive chef as of about a year and a half ago. Woods is the future of the Greenbriar. Before I can ask Goddard another question about the history of the restaurant, I turn back to see he’s gone.

“Nothing here changed for so long,” Woods says. “They needed to a long time ago, and that’s the reason Phil hired me, is they needed to be brought up to date.”

Woods works alone in the kitchen, alternately chopping vegetables and tending to a pot boiling with cranberries, whose thick sherbet-colored head Woods occasionally scrapes into a cast-iron pan and brings to the stove. The sweet, slightly pungent smell of cooked vinegar is in the air, and Woods slowly puts a textbook dice on a half-dozen onions.

“But you can’t steer a battleship 90 degrees, you’ve got to slowly turn,” he says.

Woods appears to be the right person to turn that wheel. He grew up working in is grandfather’s restaurants in South Dakota, where he learned how to succeed not only in a kitchen, but in a community.

“I think restaurants are a great place to raise kids, if that makes any sense,” he says. “It teaches you the value of a dollar and responsibility and teamwork. This is going to sound weird but if bums came in and wanted a sandwich or something to eat, (my grandfather) would be like, ‘OK, but you gotta come in and do this on this day.’ You gotta give people the benefit of the doubt until they prove otherwise… 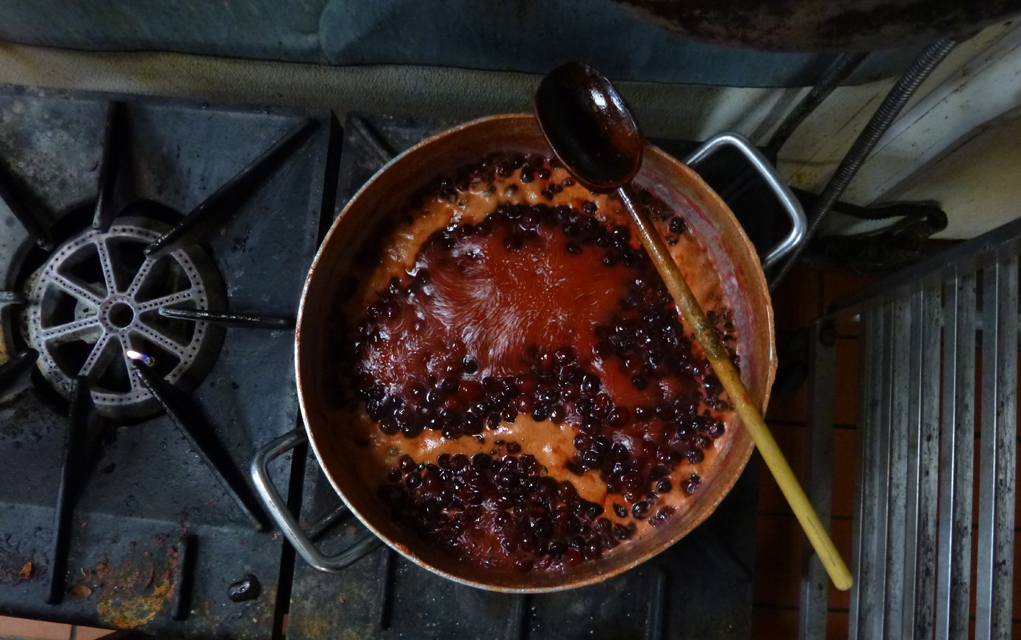 Woods ended up in culinary school, then moved to New York City, where he worked in a Tom Colicchio restaurant, then spent a year in France, bouncing around restaurants and learning how to cook in the classic French manner.

“I was a stupid American, so they didn’t let [me] touch food very often,” Woods says. “I was cleaning, and peeling potatoes, that kind of stuff. In a French kitchen, everything is steel, scrubbed from the floor to the ceiling every night, like a two-hour process.”

In France, Woods worked at Bernard Loiseau, the eponymous restaurant of the chef ingloriously remembered for being the first to commit suicide over fears that his restaurant might lose its three-star Michelin status. Loiseau was renowned not only for his food, but as is common in high-end kitchens, his fanatic (and frenetic) attention to detail. A book recounting his life is aptly named, The Perfectionist.

It wasn’t the last time Woods would encounter a three-Michelin-starred chef and notorious stickler. From France, he took a job in the kitchen at Thomas Keller’s The French Laundry in Napa, where he was able to compare and contrast the two food icons’ systems. It was Keller who offered advice about how not to cross the line into self-harm and zealotry as Loiseau had.

“I think to do this for a good amount of time you have to be a little bit crazy,” Woods says. “One of the things that Thomas Keller said every day [was], ‘You strive for perfection, you rarely ever reach it. But if you just try to do better every day, if you compound that over a year, two years, three years, pardon my French, but that’s how badasses are made’ — somebody who’s never going to cut corners and actually do things the right way.”

Woods listens to jazz often in the kitchen, and while I’m there, a few wild John Coltrane recordings play. Woods, in fact, attempted a career in music before going into food, but he laments, “Nobody likes jazz.”

He found, however, similarities between jazz and fine dining. Foremost on Woods’s mind is the dedication required to be proficient at either, and he sees a parallel in the current state of American cooking and the decline of jazz’s popularity in this country.

“When I went to culinary school … it was three and a half years. Now the culinary schools are six months, nine months, so all that classic French technique, where it all started, (Paul) Bocuse and those guys, I’m scared it’s going to get lost in time, because you ask kids coming out of culinary school, they don’t know who these guys are.

“Music is done like this now,” Woods says, miming a finger pressing a key on a laptop. “Most people who make music now can’t read or write music. I don’t think it’s right the person who hasn’t dedicated their life to learning the craft of music or the craft of being a chef to get instant fame… for not knowing your craft. It’s not fair to everybody else, and it’s harder on people who are good cooks, because it drowns the market with crappy cooks, so it makes their entire wage go down. It’s just not a great trend.” 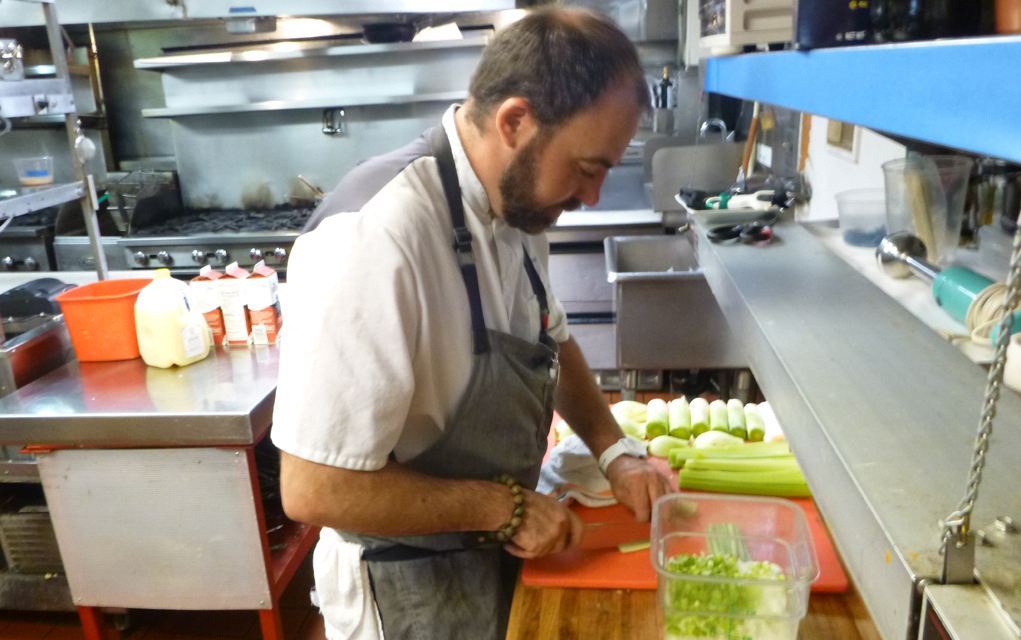 Woods acknowledges his negativity, but the same point has been expressed in other ways by several  Boulder County chefs I’ve interviewed. And it has real consequences, Woods says; if you lose classic technique, you risk desensitizing the community to bad food prepared poorly, which only perpetuates flaws in the food system that harm animals, the environment and communities.

And so the mission that Woods is on, and that Goddard is so excited to host at the Greenbriar, is to merge Old World technique with modern technology and well-made ingredients. The staples will remain — Woods says the beef Wellington will never leave — but if you cook it to order and place 3 ounces of seared foie gras on top, and pair it with a selection from Greenbriar’s 1,000-vintage-strong and award-winning wine cellar, the merits of fine dining will be self-evident.

And if you’re willing to see how far Greenbriar can go, Woods says he’s eager to host the Front Range’s most curious diners. A pickled mussel dish with broth ladled tableside didn’t sell well recently, but the people who had it said it was transcendental, Woods says. Boulder County has room to grow in terms of how experimental we are as diners, Woods says, compared to San Francisco, Chicago, Seattle and other cities with progressive dining scenes.

That’s why he’s plotting out a five- or seven-course tasting menu that’ll come in around $50. It not only will put new dishes before diners, but it rides the wave of a recent trend in fine dining that has seen the perils of the Michelin system and seeks to simplify the process by putting great dishes before diners without all the hub-bub.

History will always be a part of the Greenbriar’s appeal, but Woods appears to be uniquely suited to take the best parts of the past and bring them into a new age.