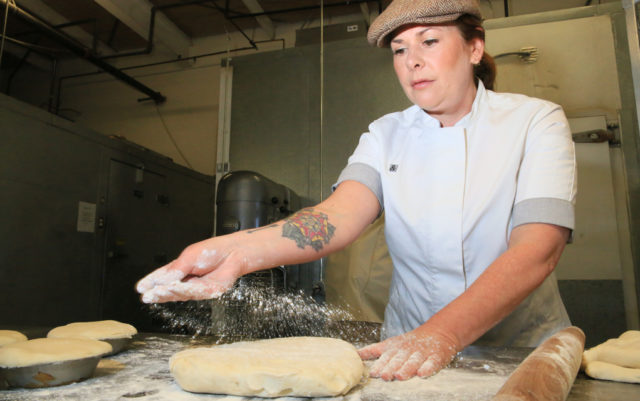 It was just another 200-pie day for chef Christine Carr at Boulder’s Tip Top Savory Pies, spreading buttery dough with a rolling pin, making fillings from scratch and vigilantly watching the crusted gems in the oven.

These are not your standard, foot-wide American pies you slice into wedges on Thanksgiving, but rather 5-inch round pies served warm. It’s not a knife-and-fork deal. You hold the pie and nibble in from one edge. You also won’t find cherries, pecans, chocolate or anything sweet inside. The flaky crust is packed with savory flavors like cauliflower tikka masala, sweet potato, chorizo and cheese, and steak and ale.

Tip Top started because founder and co-owner Robert Morrow was homesick for the tastes of his native New Zealand.

“Robert could never get his hands on a good savory pie like he ate at home. He was always disappointed, so he started the company,” says Carr, who co-owns Tip Top.

“As a trained chef I was really passionate about finding great vintage recipes and recreating them. I had visited England after going to culinary school and fell in love with Cornish pasties. They were available everywhere as an on-the-go meal. It’s the same in New Zealand,” she says.

The tiny food company crafts 11 varieties of pies in a Boulder kitchen. The anti-chicken pot pie is full of chicken — not gravy and peas. My favorite Tip Top meal-in-a-crust is the substantial cauliflower tikka masala pie. The filling includes fresh spices (from Savory Spice Shop), chickpeas and onions in a creamy tomato-based sauce. A close second is the wonderful mushroom pie absolutely jammed with chunks of sautéed fungi.

“I make a pastry from scratch from 100 percent butter and unbleached flour. I call it ‘rough puff’ because it is halfway between a short crust and a puff pastry,” says Carr, who trained at New York’s French Culinary Institute.

Newly available are Carr’s gluten-free, crustless Naked Pies in many of the same flavors. “They may be crustless but they’re definitely not flavorless,” she says.

Tip Top pies are available at The Point Café On the Hill in Boulder, the new Updog Café in Gunbarrel, Niwot’s Old Oak Coffeehouse, and the Denver Distillery.

Colorado’s first Shake Shack at 2995 Larimer St. in Denver offers a Pie Oh My frozen custard “concrete” mixed with pie from Denver’s Long I Pie. Five percent of sales go to the Food Bank of the Rockies. … During its recent, record-setting 636th episode, The Simpsons featured not doughnuts but rather Homer’s mom’s apple pie. The nostalgic recipe that flashed on the screen is actually a pretty good one from noted Los Angeles baker Evan Kleiman. … A recent tweet by the Rolling Stones and Keith Richards may explain the source of the guitarist’s unlikely longevity: “NO BUSTING THE CRUST! On every tour, the one thing Keith Richards must have in his dressing room is his beloved shepherd’s pie. Strict instructions — no one is to ‘bust the crust’ but Keith. The first slice is his slice.”

Alex Seidel won the Best Chef: Southwest award at this week’s James Beard Awards for his culinary efforts at Mercantile Dining & Provision, Fruition, and Fruition Farm and Creamery. He had been nominated in the category every year for the past decade. … Boulder’s Chef Ann Foundation presents the Real School Food Challenge May 16 at Denver’s Zeppelin Station: four chefs will prepare the best USDA-approved school lunch possible for $1.25 per meal. chefannfoundation.org. … The food world is coming to Colorado for the second summer in a row. If you don’t want to be disappointed, get tickets now for Slow Food Nations, July 13-15 in Denver. The gathering offers 50 free and ticketed events, tastings and workshops about sustainably sourced victuals. Colorado Fare, a cool dinner in the middle of Larimer Square, features Colorado ingredients and beverages. slowfoodnations.org. … Boulder’s Centro and Denver’s Lola host dinners May 22 and 23 to raise money to bring the Slow Food Mexico contingent to Denver for Slow Food Nations. They’ll feature Mexican regional cuisine from chefs Benedicta Alejo Vargas (Michoacan), Johnny Curiel (Guadalajara), Julio Gaspar (Oaxaca) and Lola’s Jamey Fader. loladenver.com/events. … Golden’s Pangea Coffee Roasters created a special blend for Mental Health Month in May called Freudian Sips with proceeds benefitting Mental Health Colorado. … It’s not fake news: the North American Meat Institute really is pushing “beefshi” — sushi made with beef — such as a reuben roll and Texas asade sushi with roast beef rolled with cilantro, slivered jalapenos and cotija cheese.

You may have already unknowingly tasted Boulder-made Cholaca. It is a key ingredient in chocolate beers brewed by more than 85 American craft breweries. Cholaca is 100 percent sustainably sourced cacao in liquid form, lightly sweetened with coconut sugar with no preservatives, emulsifiers or additives. It’s vegan, gluten-free and dairy-free. When I recently got to sip it I was wowed by the ideal chocolate flavor. I told myself it was a nutrient-rich superfood and a pretty good mood improver. Best of all was adding a fortifying Cholaca shot to my morning mug of Ethiopian Harrar.

“As I go along, I add in texture, almost like a composer chooses which instruments to use. Tomatoes, brown sugar, vinegar. I balance sweetness with acid. Major with minor. I imagine I’m creating a concerto, with a main voice speaking, backed up by the other instruments, carefully balanced. They all have to make sense together to make that dish sing. And honestly, we use that term all the time in the kitchen. ‘Does it sing?’” — Chef Susan Feniger

John Lehndorff was the founding editor of Pie Times and spokesperson for National Pie Day. He hosts Radio Nibbles at 8:25 a.m. Thursdays on KGNU (88.5 FM, 1390 AM, kgnu.org). Listen to podcasts at: news.kgnu.org/category/radio-nibbles