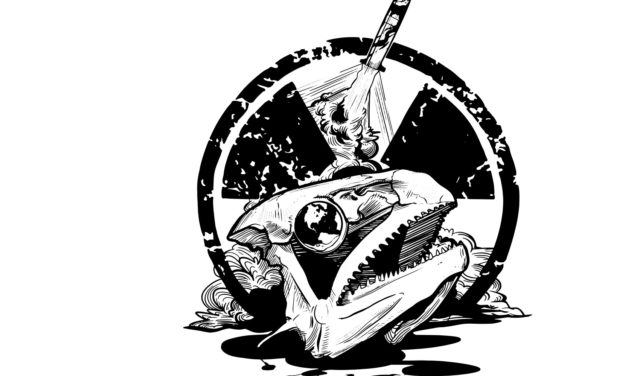 File this one under: Let’s hope it doesn’t come to that.

New research out of the University of Colorado indicates that in the event of nuclear war, the amount of seafood that humans — those who survived the conflict, of course — could pull from the ocean would drop up to 30%; significant considering how depleted land-based agriculture would become.

“I have to admit the project is pretty bleak,” study coauthor Nicole Lovenduski, an associate professor in CU’s Department of Atmospheric and Oceanic Sciences, says. “I study things like global warming and acidification of the oceans, which are already hard to study but this takes it to a whole new level.”

Lovenduski and her coauthors recently published their findings in the Proceedings of the National Academy of Sciences — it’s part of a multi-year research project lead, in part, by CU’s Brian Toon and researchers from institutes around the globe to determine the impacts of various scales of nuclear war across society.

Even a small nuclear conflict — previous research in the project uses India and Pakistan as an example — could not only cause massive loss of life in the region, but affect food systems around the world. Soot would fly into the stratosphere, beyond where airplanes fly, and it could quickly encircle the globe and block sunlight. And it wouldn’t be going anywhere for a while either, Lovenduski says.

“Once the soot gets up into the stratosphere, it takes a while for it to come back out because there’s no precipitation,” she says. “It’s going to darken things pretty quickly.”

Because sunlight is reduced, the growth of plankton would be stifled. Plankton, from single-celled algae to tiny crustaceans like krill, are a foundational food source in the oceans, and a reduction in population would ripple up the food chain all the way to humans. A full-scale nuclear war — researchers use the U.S. and Russia as an example — would almost halve the amount of plankton in the ocean, which could cause some marine populations to die off entirely — to say nothing of the amount of humans that would perish in such a conflict.

The study didn’t delve into the question of how the increased radioactivity might impact sea life that survives, Lovenduski says, but early research from those studying the fallout from the nuclear meltdown in Fukushima, Japan, in 2011, indicates that disaster added only a very small fraction of radiation to what’s already naturally occurring in the oceans.

There are lessons we can pull from the study that’ll help us improve our food systems, whether there’s a nuclear war or not.

“If we do a good job managing our fisheries then we have a sustainable source of food for the foreseeable future, but if we overfish then we do not,” Lovenduski says — about one-third of fish species are over-fished today, for the record. “If we well-manage these fisheries and there were to be some conflict and our fish stocks were at healthy levels, fisheries could replace 40%” of protein that humans get from land-based food sources, for a few years, at least.

We can also look at the lessons of the study through the lens of climate change, which — depending on whom you ask — is a more pressing threat to humanity than nuclear war. But the idea of better managing natural resources is critical to surviving either existential threat.

“This [study] emphasizes the conservative use of resources in a very meaningful way,” Lovenduski says. “If we’re not conservative in the way we use resources, we’re never going to make it through climate change or the nuclear war scenario.”

But, as with all complicated, global issues, change is only possible backed by political will. That starts with communities recognizing the need for more sustainable agricultural practices, both in the sea and on land, and asking for action — either because they’re worried about climate change, nuclear war or something else entirely.

Lovenduski says something’s got to give, because  if COVID-19 was any indication, we’re not ready for the next big, life-altering disaster.

“When we first started this project three years ago, it was hard for me to imagine the scale of the food shortages that could result from a nuclear war. But when the coronavirus arrived, it opened my eyes — human behavior is interesting. The stores ran out of toilet paper, there were no cans on the shelves, and there was no fresh produce.

“It alarmed me in a way that carried into this project,” Lovenduski says. “I don’t think based on what I saw in March we’re prepared for a catastrophe.”