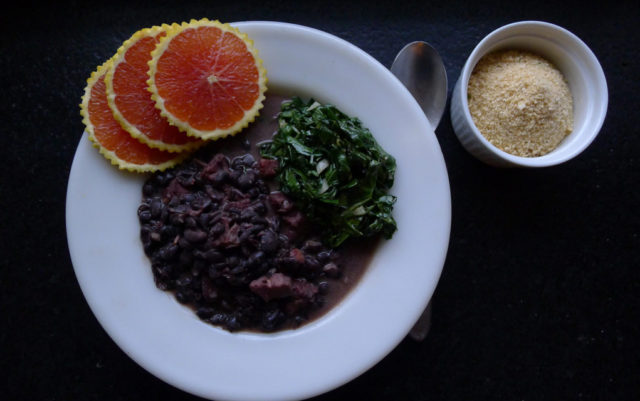 Pork and beans is an age-old combination, expressed in countless ways around the world: Southwestern pinto beans refried in lard; Asian tofu with pork sauce; the all-American can of pork and beans. Wherever there are pork and beans, there is pork with beans.

Portugal’s feijoada (faysh-WA-da) has spread to the furthest reaches of its empire. Each former colony’s version is built on a different bean: red beans in the Iberian motherland, white beans in Angola, kidney beans in Macau. But the world’s favorite feijoada is probably the one made with black beans.

The national dish of Portugal’s largest former colony, Brazil, is usually what we are talking about when we talk about feijoada.

In any Brazilian restaurant, in or outside of Brazil, from swanky steak house to the eminently practical pay-by-weight buffet, there will be a vat of dark, chunky feijoada waiting for you. It isn’t glamorous, but it hits the spot.

The ascent of Brazilian feijoada began in slave quarters, urban slums and poor rural villages. Beans were used to extend the mileage from each precious scrap of meat, and extract nutrients from bones. Over time less desperate cuts made their way into the panela de feijoada, along with smoked meat and sausage.

I learned how to make feijoada from Edilson Oliveira, owner of Oliveira’s Steakhouse in Somerville, Massachusetts. His first and only question was, “With or without pig feet?”

I soon realized that when it comes to his feijoada, such flexibility is rare.

Oliveira is soft-spoken and polite, with a wide grin and close-cropped hair. I asked about adding other meats like beef to a pork feijoada. He shook his head sympathetically. “Beef meat will confuse the taste,” he said. “It will make no sense.”

Oliveira’s feijoada recipe is one that any Brazilian would immediately recognize as an exemplary representation of this national art form. It’s a feijoada that breaks no rules, takes no chances, crosses no lines and contains no adulterants. A feijoada you could bring home to mama.

Most Brazilian meals are served with a shaker or bowl of cassava flour. This gritty powder, called farinha (far-EEN-ya), is hugely important in Brazilian food and culture.

Like feijoada, farinha began as a coping mechanism for the poor. It absorbs water from its surroundings and becomes a thick paste. A bowl of broth and a dish of farinha was a normal meal for the poorest Brazilians. In the same way beans can stretch the goodness of a chunk of meat, a few spoonfuls of farinha will stretch the goodness of a bowl of feijoada.  And it isn’t just starvation food. Even well-fed Brazilians add farinha to many dishes, either plain or in its toasted form, farofa (fa-ROW-fa).

Oliveira’s manager, Victor Almeida, who’d been sitting with us in the crowded dining room, held up his phone so I could see the photo of a package of Yoki brand premade farofa.

“This is what you want it to taste like,” he said. Almeida suggested buying both plain farinha and a package of Yoki — easily found online — so that you have a reference for the farofa flavor when you fry it yourself.

While feijoada and farinha or farofa make a filling meal, on special occasions a whole spread is built around feijoada. Feijoada completa (comb-PLAY-tah) includes fried greens like collards or kale, along with rice, orange slices and pickled vegetables.

Brazilians are known to take good ideas to extremes, and a feijoada completa is no exception. It’s the Carnival of pork and beans.

Along the lines of “with or without feet,” the only room for improvisation in this recipe is in the kinds of pork to use. There should be at least three types of pork, one of which is sausage, ideally linguica. Something needs to be smoked, preferably not bacon unless it’s unsliced. A smoked ham hock is great. There should be meaty pieces, fatty pieces and a bone or two. A rib, for example, has meat, fat and bone. The recipe below gives one example of three types of pork that check all of these boxes.

Serves: Everyone, provided there is farinha

Add the beans to a large pot, and then water, to twice the depth of the beans. Bring to a boil and cook for about an hour, or 25 minutes in the pressure cooker, so the beans are soft but not mushy.

Meanwhile, brown the pork under the broiler, each type of pork in its own oven-safe pan — I use cast-iron. Rotate the pans and stir the parts as necessary so nothing stays too close to the broiler for too long. The sausage needs the least amount of time — it just needs to be browned on the outside. Cut the sausage into rounds, add the mashed garlic to the pan and cook the sausage and garlic on medium heat until browned, but not burned. Then turn off the heat.

When the meat is cool enough to work with, remove it from the greasy pans. Oliveira recommends leaving the melted fat behind. “Otherwise it would be too heavy.”

Cut the meat off the bones and into pieces of half an inch or less on a side. Add the meat, bones, bay leaves and browned garlic from the sausage pan back to the bean pot, along with enough water to cover everything. Cook another hour or two, seasoning with salt and pepper. The next morning it will be even better, and thicker. It’s always OK to add water. Serve with all of the available fixings.