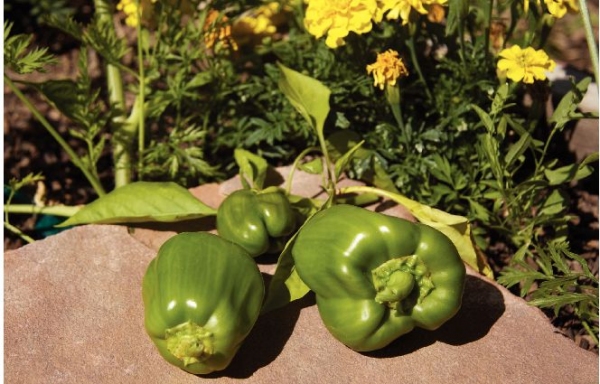 The time is ripe to pick up a peck of peppers.

As a nation, we eat more peppers than ever, on average about 16 pounds a year. Of that, about 10 pounds will be bell peppers.

What to do with all those peppers? Skin, stuff, stir-fry, freeze, roast and, yes, pickle them. A building block of many cuisines, peppers come in a wide range of sizes, shapes and colors. Degrees of heat range from zero to off the charts.

How hot can they get? Pepper heat, or pungency, is measured in Scoville units, named for chemist Wilbur Scoville. In 1912, Scoville came up with a highly subjective testing method, diluting liquefied pepper juice or pure ground chili with sugar water. He created a formula based on the drops needed to cool the heat to where it no longer burned a taster’s mouth. Instead of tasters, liquid chromatography now measures the Scoville units.

Peppers get their heat from the compound capsaicin (cap-SAY-ah-sin). Pure capsaicin rates between 15 million and 16 million Scoville units. The world’s hottest pepper is believed to be a hybrid Bangladeshi pepper, the Dorset naga, developed in England. It measures 1.6 million units.

Heat range: 30,000-50,000 Serrano: Their name comes from serranias, which means “foothills”; they originated in the foothills north of Pueblo, Mexico.

Heat range: 8,000-22,000 Jalapeño: Looking like green and red Christmas tree lights, they’re named for the Mexican city of Jalapa in the state of Veracruz.

Heat range: 500-2,500 Poblano: A fresh favorite for stuffing from Pueblo, Mexico (where it gets its name); when dried, it’s called ancho or mulato.

Peppers peel easily if they are charred first. If using a broiler indoors, make sure the kitchen is well ventilated, because pepper fumes can be caustic.

Rinse peppers and poke with a fork so steam can escape. Place on hot grill or 6 inches under broiler. Char the outer skin until blackened and blistered, turning the peppers often with tongs. Put the charred peppers in a paper bag and fold down the top to seal. Let them sit for 10 to 15 minutes. Then, peel the peppers by scraping off the charred skins with a paring knife or running under water.

• Wear latex or plastic gloves when handling peppers. Capsaicin can burn skin and eyes. To remove capsaicin from hands, rub a little cooking oil on your fingers to break up the pepper residue, then wash hands with liquid detergent.

• When stuffing fresh peppers with a mixture that includes raw meat (such as sausage or ground beef ), bake until the internal temperature reaches 165 degrees, usually about 45 minutes to an hour.

•
Peter Piper set the standard with his pickled peppers, but how many did
he pick? A peck measures 9.31 quarts, so the number of peppers varies
by size and variety. According to Rough- Equivalents.com, a peck equals
139 fresh mini-sweet peppers, 456 pickled pepperoncinis or 493 pickled
jalapenos.

Fresh
peppers are quick and easy to make in the refrigerator. Use white
vinegar or white wine vinegar to avoid discoloring the peppers. Poke a
hole in each pepper to keep it from floating.

Combine
two cups vinegar, two cups sugar, one teaspoon non-iodized salt, one
teaspoon dill seed and 1/2 teaspoon mustard seed in a saucepan and
simmer over low heat for five minutes. Put eight to 10 roasted and
peeled Anaheim chiles (whole or sliced) in a quart jar. Add three cloves
of garlic, cut into slivers. Cover tightly and refrigerate at least
three days before using. The peppers will keep in the refrigerator for
six months or more.