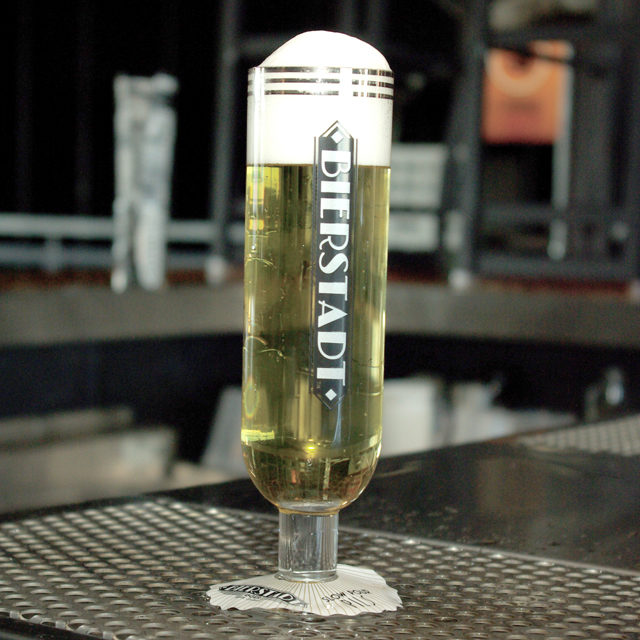 Backcountry Pizza & Tap House, one of Boulder County’s premier establishments for craft beer consumption, is an embarrassment of riches. With 68 brews on tap and 300 more in bottle, choice can sometimes present a challenge: Do you pair your beverage with your meal? Match the weather outside? Or just return to an old favorite? Well, should you find yourself in the hesitation department, fret not and order the sexiest beer on Backcountry’s list: Bierstadt Lagerhaus’ Slow Pour Pils.

“Slow Pour Pils is an accumulation of everything we do and have learned and experienced in our beer drinking,” says Ashleigh Carter, Bierstadt’s co-founder and head brewer. “We’ve always been fascinated with German pils, and I think it’s one of the most perfect things on the planet.”

But perfection takes time. Slow Pour Pils is brewed slow (roughly 30 hours), lagered longer (more than most would have the patience for) and comes out of the tap slow and steady — about three to five minutes per pour.

“We call it Slow Pour but the reality of it is that if you’re in Europe or in Germany, that’s how it’s poured no matter what,” Carter explains. “You won’t be getting it quickly [but] every single time you get it, it comes with the doily and the glass and head over the rim.”

The result is a beautiful, pillowy pile of white head atop a golden, crystal clear, thirst-quenching brew served in Bierstadt’s signature 300-milliliter chalice. The nose is earthy and the taste is clean with just enough hop bitterness to draw you down the glass.

“An experienced beer drinker should get down about halfway and order the next one,” Carter says with a laugh.

Formerly of Dry Dock Brewing Co. and Prost Brewing, Carter, and her co-founder, Bill Eye, brew what they drink, and they drink time-tested, Reinheitsgebot-approved German lagers. They even went the extra mile and imported an 85-year-old copper brewhouse from Nuremberg, Germany, for their RiNo brewery. As one of the bartenders at the facility quipped, “The only thing not German in our beer is the water.”

But specificity often comes with a hurdle or two. And though Slow Pours Pils is a magnificent beer, trying to educate customers on the elegance of pilsners is the biggest challenge.

“People call [pilsner] an introductory beer,” Carter says. “I find that a little bit insulting because it’s what I’ve chosen to do with my life. … I don’t know why it’s got to be double or triple IPA or be a sour or barrel-aged to be considered a real beer that people can really appreciate.”

Slow Pour Pils is a beer worth appreciating, with or without pizza, and the true beauty behind the brew is Carter’s passion for it. She will continue to brew what she drinks with care, commitment and a simple edict: “Beer should be there to lubricate everything else you do in life.”