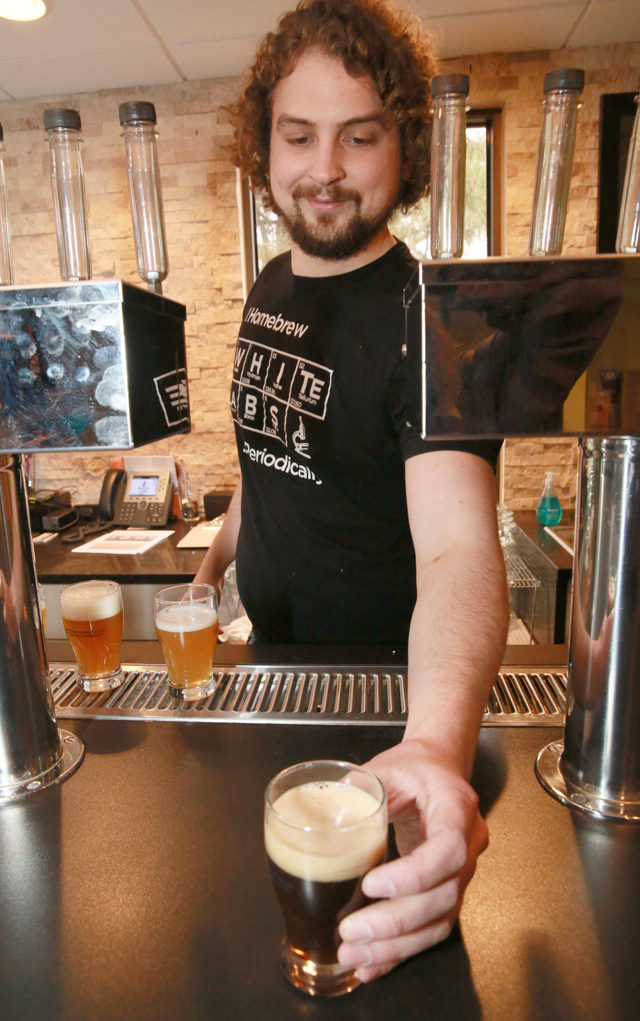 Making beer is a rather simple process: malted grains are mixed with hot water, converting the starches from the grains into a sugary liquid mixture called “wort.” Hops can be added, or not, to provide flavor and aroma, but it’s still not beer. Yeast needs to be added, or “pitched,” to use brewing terminology. Yeast gobbles up the sugars and produces alcohol and carbon dioxide. This is called fermentation, and fermentation is where White Labs comes in.

“On any given week [we] might be producing 100-150 different strains,” Carilli-Stevenson says.

But White Labs isn’t just a company for brewers; they’re also dedicated to educating beer drinkers on what yeast adds to the beer they’re drinking. That’s the goal behind White Labs’ Boulder taproom, which offers customers a chance to sample and compare different yeast strains used in base beer styles.

Take White Labs’ Oat India Pale Ale, either with the California Ale V Yeast (WLP051) or the Antwerp Ale Yeast (WLP515). The former ferments the beer clean and produces a fruity aroma, like you would expect from an American IPA; the latter adds aromas of fennel, bread and a little bit of spice, just the flavor profile you’d expect from a Belgian beer.

“FrankenStout and a FrankenIPA; for both of those we took the 96 core strains and then just threw them all in one beer,” Donahue explains. “It comes out different every time. Certain strands will take over and the balance shifts from keg to keg, even as you’re drinking it.”

Those constantly shifting balances, which continue to develop as the beer is allowed to warm in the glass, are part and parcel of White Labs’ liquid yeast. For the brewing process, yeast can either be dried or liquid, but if you want the most bang for your buck, liquid is the way to go.

“Liquid yeast has 300 different ester flavor profiles,” Carilli-Stevenson explains. “So, dried yeast, there are only a few strains that have been successfully dried and work very well in the brewing process. … I think you have a variety of 10 to 12. And in liquid yeast, [it’s] basically infinite.”