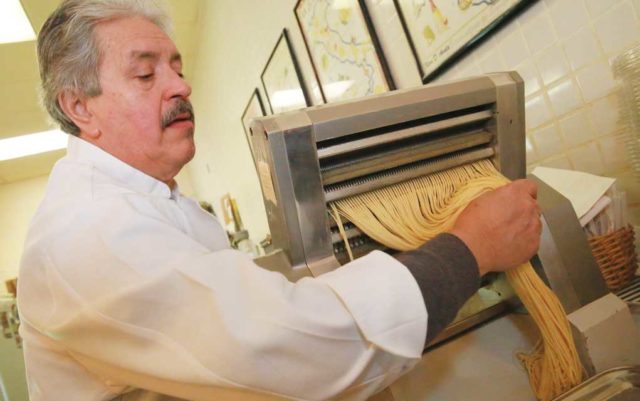 Boulder’s Il Pastaio — “the pasta maker” in Italian — has everything you could want in a red sauce joint: homemade long and short noodles, ravioli and gnocchi; matriciana, Bolognese and arrabbiata sauces; sizzling eggplant parm; casked wine; cioppino (spicy seafood stew) on Fridays; and il pastaio himself is an old kitchen-body named Giuseppe, who one might assume came from Naples or Rome or Florence to ply us with his starchy wonders.

Except, no. Giuseppe is Costa Rican. By way of Miami. How… how can this be? And being so, how do his simple Italian pastas and entrees taste so… authentic?

And he makes adjustments as he sees fit, bucking so-called authenticity — it’s a beef-only Bolognese in Boulder because veal and pork are on no-fork lists for many people here. It’s heresy of course, but Il Pastaio’s take still tastes fantastic.

Oreamuno is proof positive that “authenticity” in dining is kind of a pretentious qualifier; if a chef can prepare dishes with the same ingredients in the same manner as they are where the dishes “originated,” so what, and who could even assess that? No, the best chefs follow their own compasses.

“[For instance], in Italy cream is not used a lot like here in America,” he says. “It’s different here and so Italians say, ‘Woah, what is alfredo? Alfredo is a guy in Rome.’ When you make a pesto cream, this is from here, man, but the people like it, what can I say? It’s good.”

Oreamuno’s compass has led him around the world. But his affinity for cooking started with his parents, in Costa Rica. His father — “my father, oh my father, my father…” Oreamuno fawns — was a natural cook who taught his son the basics. Oreamuno took to it and cooked for his friends in high school. When his father sent him to Pisa, Italy, after high school “to study computers,” he didn’t. Instead, he learned first-hand how to cook Italian food, and enjoyed the scenery.

Oreamuno returned to Costa Rica, which had a large Italian population across the country; there were about a half dozen Italian restaurants in just his neighborhood. Oreamuno added a seventh Italian place, a small place about the size of Il Pastaio. Soon, though, he took a job cooking aboard a cruise liner, one which made regular stops in Miami. After bouncing around for years, Oreamuno said finally, “I like Miami,” and moved there with his wife, Marta.

In Miami, he worked in plenty of restaurants over 16 years, but when a former employer told him he needed help at Antica Roma in Boulder, Oreamuno said, “why not,” and came out to help.

It turned out Oreamuno — with his unique cultural exposure and cooking chops — was suited for the job.

The plan was for him and Marta to return to Miami after three years, but when the owner offered him the opportunity to buy Il Pastaio (and with their four kids out of the house already), Oreamuno took it. Seventeen years later and Oreamuno hasn’t changed much.

“[Making pasta] is simple,” he says. “The reason the pasta is good is for 17 years I didn’t change the recipe. I don’t want to make profit, take something for me. No, I make the same, same recipe, and that is what people like. People like, people happy, happy people come back.”

Still, Oreamuno’s nonchalance toward the craft of pasta-making obscures the subtle skills he’s developed over the years and which set Il Pastaio apart from other restaurants. He says pasta-making is “physical, but in the kitchen you need to use your brain, too.” Patience is the key: knowing exactly when the pasta dough is ready to start molding; operating in different humidity levels; moving precisely with egg-based dough, which is damaged by air; and manipulating the machines to accommodate those variables.

Oreamuno has been able to pass off some of the work to cooks, but he still spends 14-hour days on his feet prepping pasta and sauces for lunch and dinner. Going on five decades in the food business, and all it entails, is draining.

“I am tired now for my age, for my pains,” he says. “The employees change a lot in the last year. People now are more lazy. Some people come here to work and two or three days later say, ‘Now I’m leaving.’ Why? I say, ‘What happened?’ I am tired for that.”

Oreamuno laughs and adds, “I say that for everybody — Americans, Mexicans, whatever — no matter where you come from, people are lazy today.”

It’s the kind of comment that might sound cynical if it came from anyone without Oreamuno’s resume of work. But it underscores his unofficial, unspoken credo: Do you, and forget about the rest. And that extends far beyond the kitchen.

“I don’t believe in nobody,” he says of politicians. “This culture is good because it’s free. If you free, you happy. No matter who is the president, you free. Every four years, [it] changes, that’s it. This is America.

“One day, I remember watching TV, the day Nixon quit, everybody [was] talking and the next day nothing changed, everything stayed the same. Nothing changed.”

It’s that laissez-faire, come-what-may perspective that has sustained Oreamuno in life, in business and, surely, in pasta. It’s also supported his marriage, which he himself credits more than anything to his longevity.

“I’m very lucky because one of the best connections in life is when you and your wife have the same [values],” he says. “We move to Costa Rica, I eat rice and beans, she eat rice and beans; she happy, I happy. I move to Italy, I eat pasta, she eat pasta; she happy, I happy. We move to Miami, I eat fish, she eat fish; I have no problems, she have no problems. We are so very happy in the place we are.”

Thinking about how much longer he can do it — make pasta and be happy in the place he and Marta are — comes with a sigh, and then a chuckle.