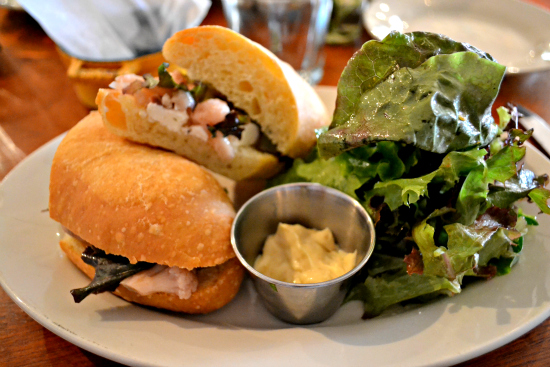 Bramble and Hare — the name evokes an English countryside pub, perhaps a spot in the Cotswolds. Waggish diners may initially dismiss this as Black Cat Bistro Chef Eric Skokan’s attempt at creating a sort of Locale Next Door. Yet this new self-styled farmhouse kitchen and pub distinguishes itself by offering locavore small plates as well as a relatively affordable prix fixe menu spotlighting ingredients from Skokan’s farm.

A sign near the door depicting a culinarily trained hare echoes illustrations from Alice in Wonderland. A dark, intimate and comfortable space, Bramble and Hare combines the urbane sophistication of the bistro with rustic farmhouse comforts. One intriguing atmospheric touch is the use of livestock pelts as a design accent. My inner larcenous self was sorely tempted to appropriate a soft snowy white sheepskin for use as a car seat cover. Criminal temptations aside, it’s an ideal spot for a romantic rendezvous or refined late-night repast, since its hours extend until 1:30 a.m.

The $29 fixed price dinner on the night of my visit featured confit chicken legs with couscous, a starter of charred apple salad with pecans and dessert. New friends and fellow epicureans Sandy and Steve and I were tempted by this offering. However, we felt we’d better appreciate the kitchen’s capabilities by ordering a small plate assortment.

We began with the $7 Detroit beet salad, an expertly balanced mix of sweet and tart. A crisp mix of organic greens served as the underlying foundation for chunks of golden sugar beet and pleasantly chewy farro, barley’s smaller-grained cousin. The ingredients’ earthy qualities were winningly complemented by the dressing’s vibrant citrusy tones.

Less compelling was the $5 soup of the day, a colorful beet and apple gazpacho. Flavored with spices that hinted at Szechuan peppercorns or the seasonings associated with Ethiopian doro wat stew, our initial take was that it was too acidic. But after a while, Steve proclaimed, “It starts to grow on you.”

The ambitious $10 dish of buffalo sweetbreads would have benefited from a warmer serving temperature. Deep frying also obscured the flavor of these delicate tidbits. Similarly, the $6 steamed bun with beet and goat cheese, which seemed intriguing on paper, didn’t quite click in its execution.

Our hands-down favorite of the evening was a sophisticated $7 “doughnut” embellished with a piping of duck pate and a bright marmalade. The orange cut the luxuriant richness of the bird while underscoring the fine qualities of the doughnut, which more closely resembled an unsweetened puff pastry. This dish was worthy of a Parisian bistro.

There’s no question that Bramble and Hare brims with culinary ambition. Some dishes, like the soup, that fall short are more the product of bold experimentation than a lack of competence. But when this eatery hits the right notes, as it does with the duck doughnut, it’s awfully tough to beat.