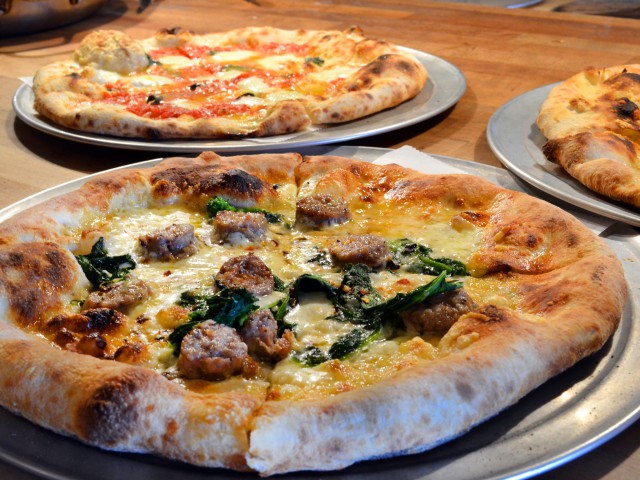 The latest entry in the Boulder gourmet pizza sweepstakes is Pizzeria Da Lupo, a collaboration between chef Jim Cohen and partner Ken Wolf of Louisville’s Empire Lounge. Friend Zoe and I made our way into this casually welcoming eatery, located not far from McGuckin Hardware, for lunch recently.

The menu is relatively simple, with a spotlight on antipasti, sandwiches, salads, daily specials ranging from roast chicken to salt cod, and pizza baked in a wood-fired oven. After taking our seats, we noticed a staffer hauling a cart loaded with firewood for the pies. While we waited for our courses, our server presented us with a small plate dotted with pinches of sea salt, red pepper and oregano.

Zoe started with a $7 Brussels sprout salad with walnuts and sheep’s milk pecorino. While some find the texture and flavor of this cabbage cousin off-putting, these sprouts were shredded like a slaw, making for a pleasingly crisp feel. The understated flavor of the vegetable melded well with the toasted nuts and the surprisingly flavorful, but not overly pungent, cheese.

While the lemon dressing was fresh-tasting, a little less of this seasoning would have better allowed other flavors to shine through.

While Lupo doesn’t currently serve a gluten-free pizza crust, it does offer cecinas, chickpea-based flat breads, with a variety of toppings. Reasonably substantial, the cecina reminded Zoe of a hefty slab of polenta. She opted for the $8 version topped with roasted melt-in-your-mouth eggplant and mozzarella, simple but satisfying additions. She would have enjoyed it even more with a touch more
eggplant, and we agreed the cecina, coupled with a salad or antipasti,
would make for a decent light lunch.

Those desiring something more substantial would be wise to sample the pizza, which starts at $9 for the straightforward Margarita of basil, tomato and mozzarella. The more deluxe numbers come in at $13, featuring such premium ingredients as shrimp and pancetta. Each should feed two moderately hungry people or a solitary restaurant reviewer who skipped breakfast.

I followed the advice of our informative server, who recommended the Saliche as a traditional choice. This pizza’s toppings left nothing to be desired and I appreciated the use of the delightful fennel-scented sausage as more of a seasoning than overly heavy main attraction. Too much meat would have made it more difficult to savor the distinctive flavors of verdant rapini (a.k.a. broccoli rabe) and creamy fresh mozzarella and ricotta. The depth of the ricotta made other versions seem insipid by comparison. But as good as the toppings were, they took a backseat to what may be the best pizza crust going in Boulder. A perfect balance of firmness and chew, it didn’t droop at all and artfully balanced the bready and crisp.

We ended with an $8 chocolate tart, or boudin, shot through with dark cocoa flavor. While the dessert was a bit on the pricey side, all the other items in our meal represented fine value, considering the quality of the ingredients and preparation. Premium pizza has been a hot local trend for the past year or so, and there’s little sign that this movement will be going away any time soon. Pizzeria da Lupo is positioned to distinguish itself in this market, due in no small part to its outstanding crust.

Chickpea
flatbreads are a regional specialty in Italy, and farinata is the name
of the Ligurian variation that’s traditionally served with such simple
seasonings as salt, pepper and rosemary. In Genoa, there’s a variant
called panissa that resembles polenta in thickness and texture, and
versions of this preparation can be found as far afield as Gibraltar.
Cecina is a specialty of the Tuscan coast, and it’s noted for having a
slightly crispy outside crust with a moister, creamier interior. All of
these are relatively easy to make, with the basic ingredients simply
consisting of water, olive oil and chickpea flour.