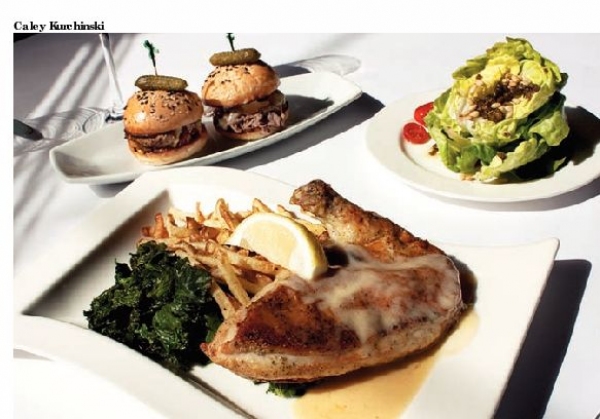 Having recently spent the last several weeks catching up on Mad Men, I was craving a decadent lunch with a touch of the old school.

Granted, I wouldn’t be having a three-martini repast, but I was seeking something with a sense of tradition and a soupcon of ring-a-ding-ding comfort. Where then, to indulge my inner Roger Sterling?

Downtown Boulder’s Brasserie Ten Ten appeared to be just the ticket. It possesses wood panels, a full bar and an overall ambience that isn’t just typical modernist minimalism. Moreover, some of the crowd here shares the professional tie-and-button-down wardrobe in evidence among the partners at Sterling Draper Cooper Pryce. Traditionalism’s also in evidence on the menu: onion soup topped with cheese, escargot, steak frites and seafood platters.

Other items such as a hot dog dressed with mornay sauce and gruyere cheese as well as French dip sandwiches (these likely originated in L.A.) may not be strictly authentic. Yet they are still consistent with the brasserie’s comfort food tradition. Vegetarians can find satisfaction in the Parisian Pasta with its asparagus, fennel and goat cheese, and there’s also a meatless crepe.

Feeling decadent, friend Kuvy and I began lunch with an appetizer of $10.95 filet mignon steak tartare. I figured this raw beef starter would approximate something Don Draper and Roger would enjoy at Manhattan’s venerable 21. The usual pros and cons of filet manifested themselves in this dish: velvety tenderness on one hand, and a milder flavor than cheaper cuts on the other. The caper flavor overshadowed the beef, and I suspect the restaurant
did the responsible thing and omitted the traditional raw egg.
Nevertheless, this preparation amply satisfied my annual craving for
uncooked beef.

Next up was a lighter appetizer of $6.50 steamed artichoke, neatly trimmed and presented with a dip of butter infused with fine
herbs. Although I grew up on sloshing these toothsome leaves through
Best Foods mayonnaise, this rich dip perfectly balanced the luxurious
qualities of the butter with the slightly sharp-tasting herbs. The
tender but not insipid texture of the artichoke leaves themselves was
dead-on, and I realized that most of my home attempts at preparing this
thistle are woefully overcooked.

Going
whole-hog decadent, we split the $69.95 brasserie platter, a
split-level tray of seafood that will adequately feed two people. On the
top layer was a martini glass (Roger would approve) loaded with salmon
tartare. Asian influenced, these diced bits of chilled fish were
marinated in shitake, sesame oil and orange. This dish had a refreshing
taste, although the earthy quality of the mushroom presented a jarring
contrast to the fish’s delicacy. Chilled mussels and cocktail shrimp
consisted of muscular specimens that were unquestionably fresh.

The
stars of the show, 18 Chesapeake and Kumomoto oysters, didn’t
disappoint. The Chesapeakes were the larger of the two, and lent
themselves well to a smidgen of fresh cocktail sauce to complement their
fresh, briny taste. Even better were the more diminutive Kumomotos,
whose inherent sweet-salty qualities rendered any garnish superfluous.
While this brasserie platter isn’t inexpensive, it’s a worthwhile
splurge considering the quality and quantity of seafood. Couple that
with the casually elegant setting, and you have a brasserie appropriate
for everything from a Mad Men business lunch to an intimate assignation.

The French dip sandwich likely originated not in Europe, but in Los Angeles. Two restaurants lay claim to being the birthplace of this classic, Philippe’s and Cole’s Pacific Electric Buffet. Philippe was actually French, which lends legitimacy to his claim that he accidentally invented the sandwich after a roll fell into a pan of roasting juices and his policeman customer said he would take his roast beef with the dipped bread.

Cole’s story is that the sandwich originated at the request of a customer who had just come from the dentist and found the undipped roll too hard to eat.