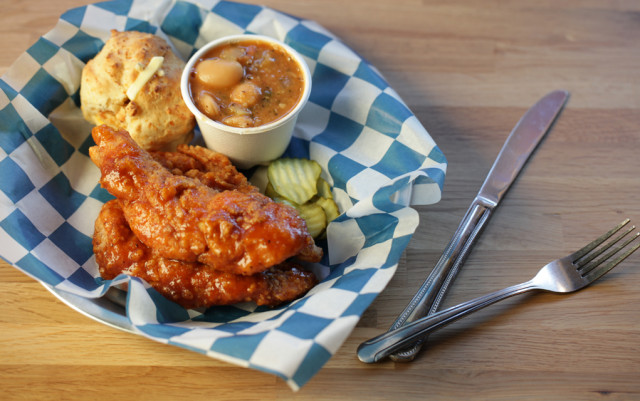 GoodBird Kitchen then puts their spin on classic fried chicken joints of the Delta like the incomparable Gus’ in Memphis and the nouveau shops in New York, D.C. and San Francisco. In fact, the folks at Big Red F spent months visiting these places on a nationwide fried chicken search in order to perfect their recipe. The chicken has been honed and hailed at The Post in Lafayette, and now it’s time for its close up in Longmont.

What they brought to Boulder County is fried chicken and sides that don’t quite surpass original varieties, but adequately fill the void of good, locally fried chicken that many have lamented.
When you walk into GoodBird Kitchen, you’ll be prompted to get in line and order at a counter. There’s a separate door for takeout orders, and the friendly counterperson will likely offer you a beer sample while you wait.

In the main line, you look up at a menu, under which you can see a smoky kitchen, and the bright light from back there makes you realize how dark the overhead Grandma’s-house light fixtures out front are. But the light just feels right; a small triumph for the interior designer.

The place, in fact, looks and feels like a side-of-the-road chicken shack. If it didn’t have such an illustrious pedigree, or if you didn’t know about it, you truly might mistake it for a decades-old shop. And the food certainly doesn’t do anything to dissuade that opinion.

The chicken really is the same as what you’ll get at The Post — fried, it’s crispy and the skin is slightly thicker than other varieties. The flour used is gluten-free, and the chicken is touted as humanely-raised and all natural. I prefer their roasted chicken to their fried chicken — it’s always just a little juicier, and maybe it’s in my head but I feel like I get more meat. At a recent large dinner at GoodBird Kitchen, that opinion was confirmed.

But what separates GoodBird from The Post is the creation of several new sandwiches and sides. Two standouts were the Nashville hot fried chicken sandwich and the deviled eggs with pork cheek.

So, first of all, Nashville hot is an old style of spicy fried chicken that has been popular in select southern cities and particularly black communities for decades. It has exploded in popularity over the past few years, culminating in this ridiculous KFC-branded hot chicken, which I’m sure is fine, whatever.

GoodBird’s hot chicken sandwich is really good, and hot. The sauce is bright and vinegary, and the chicken skin is crunchy. The meat is thin, but moist and satisfying. There are a lot of flavors in the sandwich, including coleslaw, pickles and a remoulade-like sauce. If you have high taste sensitivity, it might be too much toward the end, but even so, if you’re hungry, the whole thing works well enough to scarf down.

I’m glad for the deviled egg, in general. Its comeback is complete. GoodBird’s is large and fresh, with sweet yolk cream in the middle, light seasoning and a crispy, robust morsel of pork cheek on the top. I could’ve eaten only those for a meal.

No matter what I say, GoodBird is going to be popular, and it should be. They do chicken well, they do beer very well, and they make the dining experience comfortable, affordable, fun and, most importantly, their own.