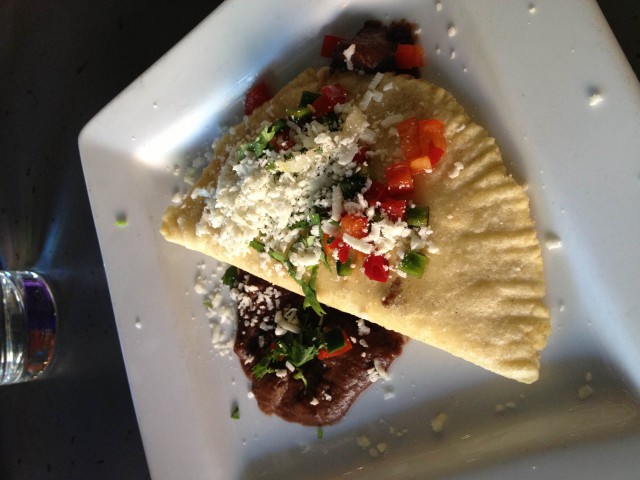 Downtown Pearl Street is a sea of wait-lists on weekends between 9 a.m. and noon. The masses of hangover-inflicted students, sleepy 20-somethings, hungry and screaming children and hostile foodies all serve as roadblocks to the end goal: brunch. Luckily, tucked in the shadow of the trendy and overly popular rests salvation in the form of a Latin American restaurant.

Aji is blessedly free of a line around 10:30 a.m. on a Saturday, likely because Latin restaurants aren’t commonly thought of for brunch opportunities, especially when surrounded by more breakfast-centric bistros and diners. However, the menu boasts something for everyone and even includes the creative twists on traditional plates that have become so sought-after.

Aji also has an ample list of brunch-inspired adult beverages with a few options for caffeine seekers. A spiked chai sets taste buds tingling and ensures a fun beginning to the day. Even better, the coffee is strong and cups are kept full in the comfortably populated dining area. The crowd mostly consists of families or larger parties, likely spillovers from the hour-long waits at neighboring restaurants, though surprisingly the noise of children playing or loud conversations isn’t overwhelming and is successfully dispersed by the high ceilings.

Traditional Latin entrees make navigating the menu seem daunting at first. Though there are recognizable plates like huevos rancheros and chilaquiles, there are a few that aren’t commonly seen on Americanized menus, like the torrejas: A French toast sandwich with sausage, apple and cream cheese.

Luckily, once you move past the names it is easy to discern what is in a dish and understand the combination of traditional Latin American foods with popular Americanized breakfast items. The benito de carnitas is a benedict dish with hollandaise and poached eggs, though from there moves past the traditional English muffin and Canadian bacon and instead includes carnitas, peppers, corn tortillas and pico de gallo. The bistec y huevos is straightforward steak and eggs except for the inclusion of ranchero sauce and tortillas. For the less adventurous, there are pancakes and a commonly seen smothered breakfast burrito.

The tarta de papa is the perfect choice for someone seeking a spicy start to the day. The plate arrives with a mountain of chorizo and vegetables atop a surprisingly fluffy potato latke. After one bite, it’s hard to stop. The chorizo, onions, peppers and ranchero sauce add a playful tingle to every bite while the hominy, avocado and potato latkes blend with the more vibrant flavors to maintain the perfect balance of heat. The layers of flavor in the dish are sophisticated in a way you don’t often find in brunch entrees.

The chilaquiles are tamer in comparison. The fresh squash and zucchini keep the dish light and refreshing, and the dichotomy of crunchy corn chips against the soft shredded chicken and eggs maintains excitement. The flavors meld well together, though I would have preferred a little more kick in the chile sauce, especially when compared to the in-your-face spice of the tarta de papa.

A crunchy pico de gallo tops the soft shell of the corn masa & lechon empanada. This Latin-inspired dish is a dumpling of sorts, with a soft corn shell and a burst of flavor from the roasted pork and black bean filling. It is the perfect starter to share, and does just what an appetizer should by whetting the appetite without being overly filling. Again, this dish is the perfect combination of crunch and softness and has a wonderful combination of tangy and mellow flavors. It would be easy to order a few of these and nothing else, yet still feel satisfied.

Aji has an exciting and authentic menu combined with a calming atmosphere, great drinks and good service. The kick of the tarta de papa, crunch of the chilaquiles and burst of flavor from the empanada make this experience stand out from the trendy pancakes that dominate the brunch scene lately. The lack of a long wait is an added bonus.

Next time you’re milling about in a crowd of hungry restaurant-goers, waiting for your name to be called, walk in to Aji and get ready for a pleasant surprise.