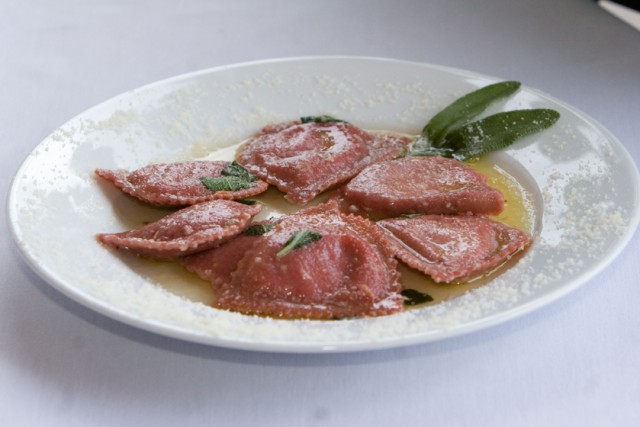 As applied to restaurants no less than to novels or films, the adjective “critic-proof ” is usually a backhanded compliment, acknowledging the consumer savvy rather than the craftsmanship of the producer in question. There’s just no point in arguing with the easy digestibility of your Fifty Shades of Grey, your Fast & Furious 6, your Cheesecake Factory: We humans were hard-wired to respond to fat, sugar and salt no less than their narrative equivalents, suspense, slapstick and sex. So be it.

Il Pastaio, however, strikes me as virtually critic-proof on a whole other level. From its bustling villagedeli vibe to its postcard-perfect Italian repertoire, this snug family-run café brooks about as much nitpicking as your own mother’s kitchen would.

I say that as a food writer who owes her career to her inspiring travels through Italy, with one revelatory moment in particular bearing relevance here. On my first-ever visit, in 1998, my then-boyfriend and I sat down in a trattoria in the resort town of Atrani on the Amalfi coast and were welcomed by the chef-owner himself, who said to us in his native tongue, “We have all kinds of pasta, all kinds of sauces. We can make anything you want — anything you want!” His 180-degree response to my order, however, required no foreign-language lessons. He shook his head sadly. The gist: “That sauce doesn’t go with that pasta shape.” Far from being miffed, I fell head over heels for the passion-fueled traditions of Italian foodways then and there.

By contrast, Il Pastaio works on the American model, whereby the customer is always right: if you insist on delicate capellini with thick, meaty Bolognese, no one’s going to tell you you can’t have it. And while there’s a time and place for authenticity in the hardline sense of the word, based on culinary rules codified over centuries, there’s also a time and place for genuineness, for pure hospitality. With its framed maps of the Boot, its bright yellow-and-red (think spaghetti-and-meatball) color scheme, and its display counter lined with goodies, Il Pastaio is here to make you feel at home, plain and simple. It succeeds marvelously.

You want wine? Don’t go expecting single-vineyard Barolo in a balloon stem; they pour standard-issue Pinot Grigios and Sangioveses like soda here, at least 8 ounces in a tumbler, for all of $7; most bottles are under $30. You want bread? One house-baked torpedo roll coming right up; it isn’t warm, but it’s huge and crusty, and there’s olive oil and balsamic vinegar on the table for dipping. Starters are more like contorni (side dishes), largely vegetable-based. A pristinely crisp tricolor salad tossed with shaved Parmesan and just the right amount of balsamic vinaigrette, for instance, boasted what were surely the last of the season’s tomatoes, miraculously ripe wedges. Unfortunately, the cauliflower with butter, parsley and slivered almonds was apparently boiled rather than roasted — browned, crunchy bits would have given the dish more oomph.

The main courses that followed, however, left me pretty powerless to complain overall. Sure, I could have used something sharper than a bread knife to cut my melanzane alla parmigiana, but between all those bubbling layers of cheese, meaty eggplant flesh and textbook marinara — not too thin or too thick, too salty or sweet, just tangy tomato-y goodness — my mouth remained too full to ask. And sure, the potato gnocchi were almost too soft, threatening to fall apart at the touch of a fork — but instead they held up just long enough to melt in the mouth, bathed in a pesto cream that maintained its herbaceous zest for all its richness. Triangular sausage ravioli, meanwhile, were flawless: Plump and firm yet silken, they’d have complemented most of the dozen or so available sauces.

I should note here that all the pastas are made in house, even the shorter, more complex shapes; that’s rare, because handcrafting them is a chore. But it pays off — as a visit at lunchtime, when service is buffet-style, proved. Baked rigatoni was the right call for a blustery day: the tubes fairly thick but toothy, not doughy, under a crust of browned cheese that mingled with touches of cream and bright flecks of mushroom and carrot.

The entrée came with a choice of seven sides, plus salad and the aforementioned roll. The rosemary-sprinkled new potatoes I picked needed salt, and the greens were a little too oily. And yet I feel about as justified in saying so as I would telling my own mom her Thanksgiving turkey was dry. Il Pastaio’s warmth and generosity is critic-proof.