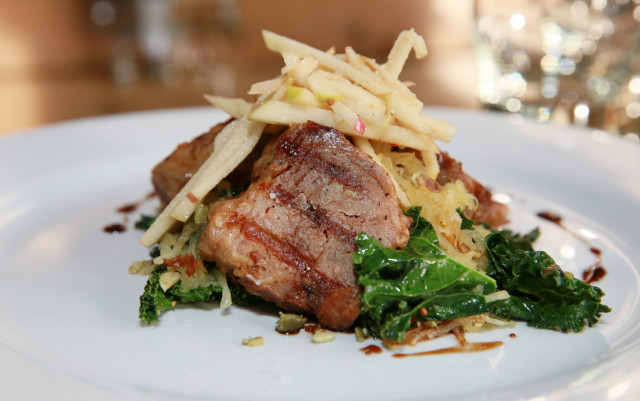 Often in this column I’ll praise a restaurant for preparing food simply. It’s always a feat when a chef lets ingredients sing their own songs, while also elevating whatever dish he or she has created, putting their own stamp on simple.

The truth is that elevating simple is hard to do, and we’re spoiled in Boulder County by the number of farms and restaurants that do it consistently and seemingly without effort. Indeed, making simple food is like being a football placekicker: Everyone says they can do it and that it looks easy, but then shotgun two Miller Lites at Broncos’ training camp and step up to the kicking exhibit and shank an extra point into the Dipping Dots display.

Like placekicking, preparing simple food requires consistent and precise knowledge and execution of ingredients. In short, for simple food, the devil is in the details.

During a recent trip to Farmer Girl Community Bistro, and a stop at their food truck, I had several dishes that were fine enough, but just missed on a few details that, for me, kept the growing restaurant enterprise from the next level.

Let’s start with the best dish I had over a couple nights: the carrot latke. It was a coaster-sized crispy patty of shredded carrot topped by a kale pesto and pickled carrots. A simple arugula salad was placed beside it. The kale pesto and pickled carrot zinged, and brightened the carrot latke, which was understated in its seasoning and flavor to say the least. When all the elements of the dish were on the fork, it was a nice and easy appetizer.

Next was a salmon tartine. Chunks of dressed fish were placed atop lightly toasted baguette slices with assorted julienned vegetables. The texture and temperature of each bite could have been more intriguing — instead, each bite consisted of a light resistant chew with a refrigerator-cool temperature throughout. In other similar dishes I’ve had, the bread is warm and toasted to crispy, if not charred; fruit or citrus is added for tart; cilantro or parsley is added for zip; and so on.And, there was the small detail of particularly fishy-tasting salmon on some bites and not on others.

In another dish, lamb ragout was set atop homemade long tagliatelle with parmesan cheese and some brocollini-like greens. The pasta was perfectly made, the greens were nicely wilted and the lamb was cut into well-proportioned chunks. But a gaminess in the lamb didn’t quit, and it became a little exasperating toward the end of the dish. And look, lamb can be gamey, but there are preparation methods and accompaniment options to limit that gaminess. And yes, it would be counter-intuitive for a farm-to-table restaurant to do-up one of its components to hide a very earthy flavor in a simple dish, but I think that’s the kind of unseen move that elevates simple foods.

That ability to integrate and elevate was again lacking from a Colorado cassoulet. The dish was made of white beans, pork shoulder, chicken and sausage, served with a toasted, long baguette slice. Each element in the mixture tasted fresh, but there was nothing integrating the ingredients together. There was no foundation with which the tongue could anchor the flavors, and the lack of salt or seasoning only contributed to a general blandness.

And in the apple crumble with mascarpone topping dessert, I couldn’t help but feel like a simple homemade ice cream or whipped cream would’ve been a much better accompaniment than chilled mascarpone, whose texture and flavor resembled butter or cream cheese, and overrode everything.

Farmer Girl Community Bistro and its truck are well-deserving of business. Nothing in what I ate indicated that there isn’t a willingness to be creative and to improve. I’ll be back because Boulder County needs more casual, lower cost farm-to-table restaurants, and because freshness was paramount. Maybe, for me, some refinement of that freshness was necessary, but those adjustments are easily made.