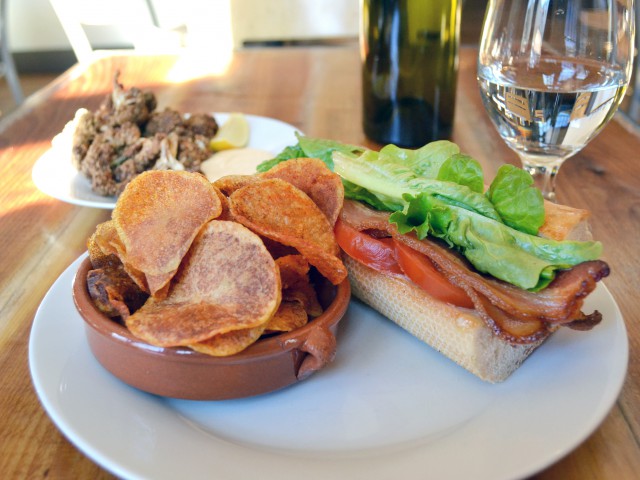 Café Aion on the Hill, unlike other spots in this neighborhood, is less grab-and-go student hangout than leisurely neighborhood haunt serving all three meals. Its combination of wood and brick, coupled with ample sunlight and modernistic seating, give it a quality that’s elegant in an understated way, while still retaining a welcoming atmosphere.

On a recent chilly Saturday morning, I found this setting even more hospitable as I happily took a seat next to the warming fireplace. While I studied the menu, I decided to give a $4 house chai a shot. While I’m partial to more spicy versions such as Bhakti’s ginger-infused nectar, I appreciated the mellower qualities of Aion’s take. The flavors were light, and best of all, it wasn’t too sweet, although a trace of honey lingered after each sip.

Aion has an ample selection of baked goods made in house, and friends Joey and Randy decided to partake in a $3 croissant and a similarly priced cinnamon roll. I sampled the $1 donut and hole, the most inexpensive item on the menu. Each of these choices highlighted the best attributes associated with these pastries. A supremely light and buttery texture characterized the croissant, while the roll had none of the shock-inducing sweetness of a mall version, yet retained all of its filling and satisfying qualities.

The donut was as close to a chain store sample as hand-crafted artisan bread is to a loaf of Wonder bread. This classic guilty pleasure was a keeper, with a crisp exterior liberally dusted with cinnamon and sugar crystals wrapped around a soft, piping hot interior indicative of fresh-from-the-fryer preparation.

Randy and Joey ordered off the lunch menu.

Joey’s $10 olive oil poached cod unsurprisingly consisted of mild white fish, and accompaniments of olive and garbanzos gave it a fresh and wholesome Mediterranean taste akin to salad nicoise. The poaching kept the fish tantalizingly moist, and I suspect this dish would also be interesting with a deeply flavorful species like black cod.

The star of Randy’s $9 BLT was the thick and not too salty house-cured bacon, although the accompanying cumin-scented potato chips were no slouch either. The only knock against this sandwich was that the voluminous amount of baguette nearly swallowed up the filling. Nevertheless, this was a more than fine interpretation of a sandwich staple.

From the breakfast selection, Randy’s daughter Megan went for a $6 half-order of eggs benedict. Any fan of this morning specialty will enjoy Aion’s take, particularly the house-cured ham. The subtle flavor stood in contrast to the usually over-processed taste of this cured meat, and even those who are ambivalent about this pork product will deem it a winner. The same could be said of the sausage in my $8 scrambled egg plate, although the eggs themselves seemed almost grainy, rather than custardy, in texture. Happily, this quibble was canceled out by the terrifically savory qualities of caramelized onion.

The key to Aion’s success definitely is in its ability to take the familiar and make it seem new, primarily through top-notch prep and ingredients. For example, given the subtle and flavorful qualities of the bacon, ham and sausage, there’s no doubt that Aion knows pig. Given this attention to quality, I’d enthusiastically return for brunch, lunch or dinner.

Think
French baked goods, and the first thing that pops into your mind is
likely going to be the moon-shaped croissant. However, the origins of
this pastry aren’t Gallic, but Austrian. Consider the kipferl, a filled
pastry related to rugelach and a Vienna bakery staple. This croissant
antecedent arrived in Paris in the 1800s, a popular item at former
military officer August Zang’s Viennese bakery. Imitators quickly
glommed on to the kipferl, and this popular item took on the French
name for its crescent shape, croissant. Zang left Paris to become a
newspaper publisher, and the daily he founded still exists.