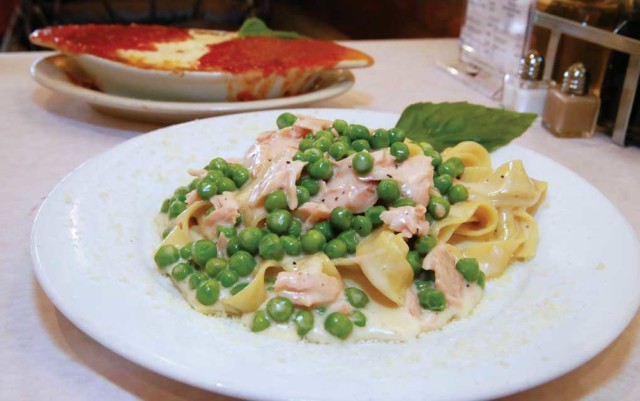 We’re taught in early language arts classes to write what we know. But in writing about food, the adage creates a paradox: When a reviewer dines out, he or she does so to experience something new or change perception about something common. Thus, the food writer is often forced to write about that which he or she doesn’t know.

Food writers work around that obstacle in numerous ways: some become method actors and imagine the stories behind food; some work in kitchens, ask questions or read books to learn; some fake it and coast; some — few — really are good enough to write well about nearly everything.

The approach a food writer takes comes down to what that writer values in food. I don’t always know or care what goes into a dish, but I at least know the feeling of eating it. I mean, if it tastes like wet dog, I’ll make a note. But my favorite restaurants in Boulder County make food for feeling, and none does so more than Il Pastaio.

It’s homemade pasta, Italian and Italian-American staple dishes, wine by the carafe, paper covers on tables, the simple paper menu, Peroni, Italian spoken behind the counter, the cheesy leaning tower of Pisa logo, the cramped dining room, all of it. It’s the only restaurant in Boulder that feels like home, and much of the credit goes to the quality of the food itself.

On a recent evening, we sat at a tall table along the wall and ordered a lot. The first dish that came was polenta with gorgonzola. The polenta was piled semi-soft on a plate, with the consistency of wet beach sand at low tide. The gorgonzola was sauced on, and added everything to the polenta. It was salty, creamy and simple.

The next dish was a seafood salad inspired by a Southern Italian dish. Small octopi were beheaded and drenched in citrus and oil. They had a pleasant consistency — slightly resistant, but tender. Either they or the peppers on the salad gave each bite a thick, bright olive oil glaze. With fresh lemon, crispy lettuce and white rings of calamari, it sprang, and the preparation of the octopi welcomed robust maritime flavor.

We then moved on to pasta, eating pappardelle arrabiatta and fetuccine alla matriciana. The pappardelle were big, broad noodles that went on for days, and the spicy arrabiatta sauce was perfectly acidic and bright, the tomatoes fully deconstructed, and the oil of chili peppers liberally integrated. The matriciana sauce was an exceptional ragù of tomato and chunks of onion and pancetta. Though the meat is typically robust guanciale (jowl), the pancetta bits were fatty and indulgent, and the pasta alone would’ve been a meal.

But we pressed on with entrees of eggplant parmesan and mushroom ravioli. The ravioli came in crescent moon shape and were expertly cooked. The pasta shell was al dente, and the savory mushroom filling was piping hot.

The eggplant parm came in a simple basil and tomato sauce, with broiled mozzarella cheese atop soft, thick eggplant slices. It’s such a simple, important dish and so easy to mess up with heavy sauce, or wrong ingredient proportions, or incongruous textures, but Il Pastaio’s is exemplary and should be given a plaque for its exceptional service to this community.

At the end of the meal, we had gotten sauce, olive oil and bread crumbs everywhere. The scraps and stains told the story of a meal well-had; you don’t make a mess during a bad meal. Il Pastaio, as all good restaurants are, is good for the soul. If you want that feeling, this is it.