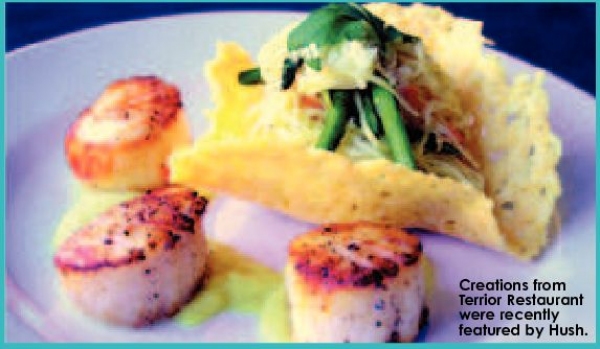 Groucho Marx famously sent a telegram to the Friars Club, a selective association of entertainers that counted the comedian among its membership. His wire went like this: “Please accept my resignation. I don’t want to belong to any club that will accept people like me as a member.” I thought of this line when I learned about Hush, a not-so-private private supper club that features an invite-only guest list. But making the cut on the guest list simply requires registering online at www.hushdenver.com.

Faux exclusivity aside, the aims of Hush are simple. Founder Phil Armstrong’s goals are to highlight up-andcoming chefs in non-restaurant venues.

While most of Hush’s events have occurred in Denver, this operation is actively seeking a foothold in the Boulder area. On a recent Sunday evening, I attended their first Boulder event, a fundraising dinner for the local Slow Food chapter.

The chef for this $85-per-person event was Tim Payne of Longmont’s Terroir, and the venue was the Colorado’s Best Beef farm on Jay Road. This outdoors happening consisted of appetizers, followed by five courses featuring local ingredients and regional wine pairings. This all came together in an elegant, white-tablecloth setting that led friend Lisa and I to conclude that the proceedings resembled a swank wedding reception, sans the requisite emotional baggage.

Lisa and I wholeheartedly enjoyed the starters, which included a lip-smacking sphere of puff pastry stuffed with mildly seasoned Cornish game hen. A pair of Haystack goat cheese treats followed. One consisted of chevre dipped in piquant paprika, and the other was a masterpiece of subtlety, cheese blended with delicate Frangelico and dusted with hazelnuts.

The first course consisted of a refreshing smoked tomato gazpacho, tempered by an icy cucumber granita, a savory sorbet. This refreshing ice, coupled with a verdant, arugula-infused oil, balanced out the dish’s peppery qualities.

Next up was an offering from Colorado waters, a slab of striped bass over chunks of crayfish, drizzled with a mellow sorrel sauce. Unlike its saltwater cousin, the fish had a slightly muddy quality to it that was distracting, although the crawfish had a fresh and subtle taste.

Leg of Long Farm pork was the centerpiece of the next dish, a salad dressed with a cider reduction and garnished with pork cracklings. Some found the pig tender, others found it tougher, and I suspect this disparity comes from the fact that this meat isn’t subjected to overprocessing like most supermarket pork. The cracklings were a wonderfully chewy, guilty pleasure, as was the supremely decadent cornbread crouton sautéed in duck fat. Topping it all were slivers of honey-glazed turnip, contributing just the right note of sweetness. The final savory course highlighted Colorado’s Best Beef offerings and consisted of port-braised short ribs atop a roesti potato cake shot through with shredded smoked brisket. The ribs carried the rich savor of bone marrow, complemented by a port wine braise.

“Insanely good” describes the dessert of Madhava honey and Haystack goat cheese gelato, topped with a medieval mead glaze and paired with crunchy lavender-scented biscotti. Surprisingly the cheese imparted a profound richness without the pungent tang associated with goat’s milk. This nougat-like sweet was a fitting end to the best meal I’ve had this year. I suspect even Groucho would have been pleased with the evening.

Much
of the menu at the Boulder Hush dinner was consistent with the tenets
of Slow Food, a movement that began in Italy in the late 1980s. A
response to the fast pace of modern life, Slow Food holds that the
“fast life” is best described as “universal folly,” giving rise to such
societal ills as fast food. To combat the scourge of fast food, this
movement puts an emphasis on appreciation of regional cuisine and
upholding such environmental values as promoting biodiversity. Slow
Food campaigns have ranged from supporting the production of raw milk
cheeses to stemming climate change.