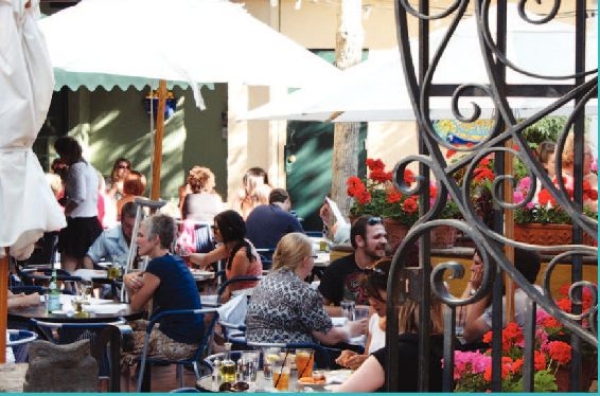 The Mediterranean Restaurant, or just the Med, as it’s popularly known, is the old reliable of Boulder eateries. Its voluminous assortment of southern European pastas, sandwiches, tapas, salads and main plates means that anyone’s dietary restrictions or even plain old pickiness can be easily accommodated. It’s also a lively place, set off by its downtown location and dynamic customer base, which spans from well-heeled lawyers to chic students.

The far-reaching menu and welcoming ambience made this a perfect locale for me to reconnect with my elementary school classmate Georgette, whom I hadn’t seen in two decades. Who could find fault with the bright and sunny color scheme evoking the restaurant’s namesake? The patio dining space reminds one of savoring tapas in Madrid, minus the dense crowds and blaring Europop. Speaking of noise, we secured an outdoor table, since the echoing tiled surfaces of the Med’s interior don’t always promote quiet conversation.

We began with tapas. The $6 sautéed garlic mushrooms, possessing a slightly watery texture and taste, weren’t anything spectacular. The $5 bacon-wrapped dates were better, mixing the soft, candy-like sweetness of the fruit with the smoky complexity of the bacon, set off by a whisper of crispness. The $8 minced yellowtail ceviche tasted clean, although fewer diced veggies would have facilitated our appreciation of this tuna’s freshness and firm texture. Also, this dish lacked something to scoop up the seafood, like plantain chips, and it felt awkward to fork it into one’s mouth.

Georgette went for the evening’s special $13.95 entrée salad. This consisted of a good-sized chunk of halibut on mixed greens with strawberries, cucumber, grape tomatoes, blackberries, red onion, carrot and avocado. The fruit and vegetables were fresh and visually appealing, and the fish was moist and tender. However, this dish paled in comparison to some of the
salads I’ve sampled here in the past, as it lacked the same balanced
complexity the others had.

I ordered an entrée off the griglia, or grilled, section of the menu. These choices, which top out at the mid-$20 range, consist of such simply prepared centerpieces as salmon, New York steak, yellowfin tuna and lamb chops. One can also select a side of basmati rice, potato, or vegetable and a sauce. My selection was the $16.95 hanger steak. This meat was the meal’s high point, grilled to a perfect medium rare and possessing both remarkable flavor and tenderness. Adding flavor was chimichurri, the South American sauce of olive oil and such verdant herbs as oregano. However, I would have preferred this condiment to have a more assertive taste.

It’s hard to go wrong with dessert at the Med, and Georgette and I ordered the $6.25 crème brulee and the $3.95 panna cotta, two custardy European cousins. Each was fine, with the brulee having a sugary crust resembling a thin glass and an overall silky texture. The sweetness of the creamier panna cotta, which was a tad much for Georgette, was tempered by a drizzling of citrusy syrup that contributed welcome tang.

I’ve had meals at the Med where there was little to criticize. The entrée salad and mushrooms were a little below the level I’ve historically been accustomed to at this eatery. Nevertheless, the Med remains a more than acceptable spot for a refined yet comfortable meal, or even a reunion with an old friend.

Clay’s Obscurity Corner Welles and another Med A handful of scenes from Orson Welles’ 1974 brilliant documentary F For Fake take
place in La Méditerranée, a Paris seafood restaurant. Ostensibly, the
main subjects of the film are art forger Elmyr De Hory and Clifford
Irving, Howard Hughes’ faux biographer. Welles himself appears
throughout as a narrator and self-confessed charlatan. His bag of
tricks includes adroit editing and an indictment of so-called “experts”
who allow fakers to thrive. By the end of the film, Welles convinces
the audience that the dividing line between fakery and authenticity is
not nearly as clear-cut as we would like to think.