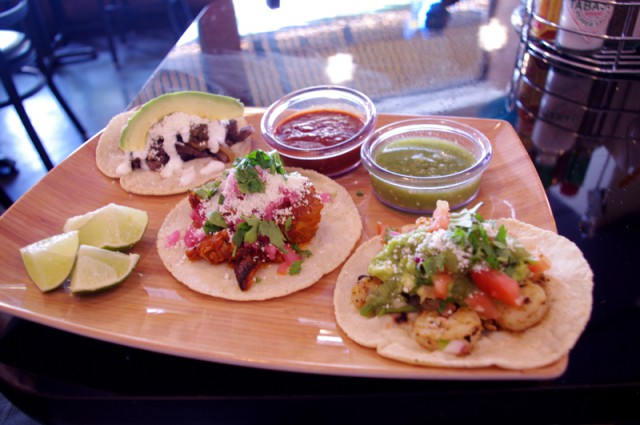 I’ll argue that the most critical determinant of an ethnic restaurant’s success is how much it respects the source cuisine. Go to any ethnic neighborhood in a big city, and you’ll likely chance upon a family-run hole in the wall that’s wildly popular due to its authentic home-style cooking. On the other hand, the graveyard of shuttered restaurants is littered with places that insulted the source material by, say, spritzing an egg roll with truffle oil.

Such was my concern with the newly opened, self-proclaimed “urban taqueria” located at the intersection of Walnut and Broadway in Boulder. The name of the place appears to be more or less Taco. But on the menu, it reads “T•ACO,” on the website it’s “T/ACO,” and on the receipt, it says “TIACO.” While this unconventional naming scheme may make for a bit of buzz, I couldn’t help but feel confused. It also reminded me of when I wanted to spell my name “Phöng” and front a metal band.

Less ambiguous is the menu, which opens with a selection of familiar salsa and guacamole starters. Health-conscious diners may want to check out the $6.95 salad, available with optional steak or chicken and featuring a mix of fruit and vegetables, including watermelon, orange, jicama, romaine and avocado. A la carte tacos range in price from $3.50 to $4.50 for the top-of-the-line ahi tuna and mango variant.

For now, there’s also an introductory special: a beer or soda and two tacos for the modest sum of $7.50. Put up two more bucks, and you get a house margarita. The only limitation is that two of the higher priced tacos are exempt from this offer.

Not that that really matters, as the available offerings are more than satisfactory. Choices include a veggie number featuring a spaghetti squash, roasted poblano and red onion filling as well as a meatless cheese option featuring cojita and the first-rate guacamole.

Before diving into tacos, friends Sally, Chris and myself started with a duo of appetizers, the $6 red snapper ceviche and equally priced guacamole. The snapper tasted fresh, although this white fish didn’t have much flavor on its own. But the additional ingredients of onion, cilantro and citrus offered a nicely balanced counterpoint to the seafood’s relatively blank canvas. As for the guacamole, it was darn-near perfect, with a fresh green appearance, subtle lime notes and a pleasing accompaniment of crisp and warm tortilla chips.

Then came the soft street-style tacos, the first being pork carnitas, with the properly authentic mix of tender and slightly crisp bits. Accompanying garnishes displayed culinary restraint with simple adornments of red onion, cilantro and, taking a page from the al pastor playbook, pineapple. Decadent braised pork belly was this preparation’s weighty cousin, complete with accents of cheese, pickled onion and salsa.

These additions complemented, rather than overshadowed, the porcine richness.

Most diners have a good idea of how a seafood taco should taste, and the snapper preparation rigid ly adhered to this expectation. Chunky fish, crunchy cabbage and the creamy heat of a chipotle mayonnaise made for an archetypical street snack. Urban taqueria and confusing naming schemes aside, this dish, like the other tacos, revealed this eatery’s fundamental strength: an obvious respect for the original source material.