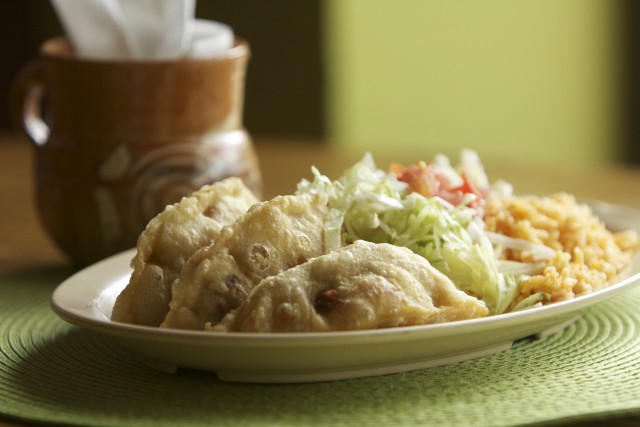 Comfort food’s a tricky concept. When it entered the popular lexicon a couple of decades ago, the term applied mainly to meat loaf, tuna casserole and other suburban midcentury staples; today, reflecting shifts in the American culinary landscape, it could as easily encompass Vietnamese pho, Canadian poutine and chicken tikka masala. What’s comforting is what’s familiar, and what’s familiar varies across time and space, from person to person.

If that person happens to be a food writer, the phrase can even get turned on its head: my happy place is a table covered with dishes I’ve never tried before. Take Pupusas Sabor Hispano: While the menu lists myriad Mexican favorites to make most anyone feel right at home — tacos, burritos, huevos rancheros — I gravitate straight toward the much-lesser-known Salvadoran specialties. And I’ve yet to be sorry for leaving my comfort zone upon settling into a booth at this vibrant little outlet, where its brightly painted murals, terra-cotta awnings, and laid-back service whisk diners far from the north Boulder strip mall it’s tucked into.

Exhibit A might be the pacaya I ordered à la carte as an appetizer (an entrée portion’s also available). The menu translates the word as “palm tassel,” a decidedly easier-to-swallow description than the one I came across in Economic Botany: “the edible immature male inflorescence of a Chamaedorea palm.” The dish itself, meanwhile, almost defies description: picture, if you can, an abnormally thickstalked rosemary sprig, but the leaves resemble long, ultra-thin baby corns. Beneath the eggy breading it’s deep-fried in, pacaya even tastes like baby corn, crossed with heart of palm.

The whole fascinating thing is glazed with a thin, tart salsa roja that — along with curtido, essentially vinegary coleslaw — also accompanies the restaurant’s signature item, pupusas. From these griddled corn tortillas oozes a variety of fillings, among them chicken, zucchini, roasted chiles and chicharrón. Never mind the fried rinds of Mexico; in El Salvador, chicharrón is slow-cooked pork that’s finely shredded and highly seasoned — you might say downright salty. Yet its pungency is balanced by the natural sweetness of the soft, thick masa (corn dough) it’s encased in. The same goes for the pocket containing a gooey, funky mixture of Monterey cheese and little coils of fiddlehead fern, whose flavor isn’t unlike young asparagus. Any way you slice it, a well-made pupusa is the very essence of comfort food.

I can’t quite say the same of the surprise that awaited me with Angela’s Plate, centered around what the menu calls “a green-bean variation on the chile relleno theme.” With no chile for the breading to attach to, however, the reality is rather like a crêpe stuffed with green beans and more Monterey cheese. As the salsa roja on top mixes with the drippings from the rich frijoles refritos and the juice of the chopped fresh tomatoes that garnish the Spanish rice, it all grows soggy pretty quickly. While, in my book, most dishes benefit from the mingling of their components, you’d be best off asking for an extra plate with this one. Transferring the rellenos de ejotes (to use the Salvadoran term) immediately to a clean surface might allow it to retain its structural integrity a bit longer.

But if you’d just as soon stick to more-recognizable territory, Sabor Hispano will guide you there. A basket of slightly stale chips is nothing special, but the self-serve salsa station is: Its quartet of options includes a dip that looks like aioli but tastes like pure fire, combining canola oil, garlic, avocado and jalapeño. The stuffed pastries known as empanadas are often made with plantain dough in El Salvador, but here they follow the wheat-based Argentine model, their shells fried to a light, bubbly crisp to encase the same choice of fillings offered for the pupusas. And while you’ll find flashier tortas all along the Front Range, you may not encounter a more satisfying simple version of the classic Mexican sandwich than you will from this kitchen. For instance, mixed with nothing but lettuce, tomatoes, avocado and a smidgen of cheese atop a toasted bolillo roll, the carne asada shines — heaping, smoky and unexpectedly tender.

As for washing it all down: since Sabor Hispano’s margaritas are merely passable, go for beer or, better yet, housemade horchata. The now-trendy sweetened rice milk, touched with cinnamon and not too thick, is so much more refreshing than an imitation-vanilla shake alongside a drive-through burger.

If anything less than Chotchkie’s-style treatment makes you antsy, the ultra-casual service here understandably won’t soothe your soul — it bears no trace of the perky flair parodied in Office Space. Still, that’s just as well for me, who knows no greater comfort than being left in peace to make delicious new discoveries at my own pace.