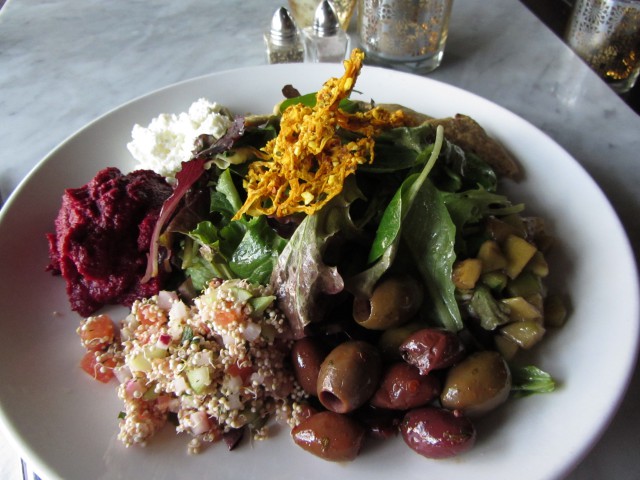 When I first heard the name of Boulder’s new eatery Shine, I was hoping it would feature entertainment by a troubled pianist portrayed by actor Geoffrey Rush. Alas, Shine appears more to refer to notions of maximized self-actualization than David Helfgott, although music is on the menu. The latest venture from the Emich triplets, this gathering space, bar and restaurant is just a few doors down from their former establishment, Trilogy.

The current location, formerly home to Redfish and Los Oasis Grill, is an expansive venue, and it makes sense that it also hosts DJ dance parties, world music performances, and yoga events. It’s not terribly surprising that when pal Andrew and I went for a recent lunch, much of the clientele was dressed as if they had just wrapped up yoga class. It also follows the menu of soups, salads, and entrees that feature generally healthy preparations, ranging from locally sourced grass-fed burgers to lentils prepared with coconut milk and Indian spices. There’s also a kids’ menu, and several dishes feature pickled elements.

Since both Andrew and I had to return to work after lunch, we declined martinis and housemade beer. Instead, we choose two of the $6.50 non-alcoholic potions. Andrew had the Owl Eyes, a beverage designed to enhance focus. With its fine ginger flavor tempered by apple, a drop of an herbal tincture overwhelmed the rhizome’s flavor with a strong cumin-like scent.

More balanced was the Liquid Hush, a vanilla-scented, steamed coconut milk cocktail served warm. This beverage created a pleasant effect reminiscent of drinking a not-too-sweet, frothy marshmallow with a whisper of Orangesicle.

As it was a cold day, we started with two $4 cups of soup. Andrew enjoyed a cup of Buffalo chili that was less assertive than an old-fashioned Tex-Mex preparation, but was still quite satisfying. The pureed Colorado Winter squash soup possessed just the right amount of spicing to ward off winter’s chill, while retaining spring-like freshness with a crisp kale chip garnish.

Andrew’s $12 French dip lamb sandwich spotlighted locally sourced meat from Lafayette’s Leistikow Farms, a far sight better than Aliki Farms. The thinly sliced meat carried a milder flavor that would pass muster with those who don’t typically care for lamb. “Splendid” best describes the dark and rich au jus sauce. On the side, this sandwich was accompanied by better than average sweet potato fries, distinguished by heft and earthy flavor.

Two jackfruit tacos were pricey at $13.50, but they were unique for Boulder. While my previous encounters with this ingredient were in fruit shakes at Vietnamese pho restaurants, I was aware that jackfruit has become a Southern California vegan taco favorite. Though it doesn’t entirely capture the flavor of meat or poultry, it does nail the texture, and Shine’s spicing helped the taste, as did a mouth-puckering fermented salsa verde. Blue corn tortillas contributed eye appeal, and sides of skillfully cooked black beans and quinoa rounded out the dish.

Shine certainly offers up a menu of healthy and innovative choices, although I would have been more enthusiastic if the prices were lower. However, the happy hour/late night menu does seem to address this concern with reasonably priced sliders and dishes of roasted chickpeas, to name a few choices. Shine reflects ambition on many levels, and certainly succeeds on uniqueness and quality.