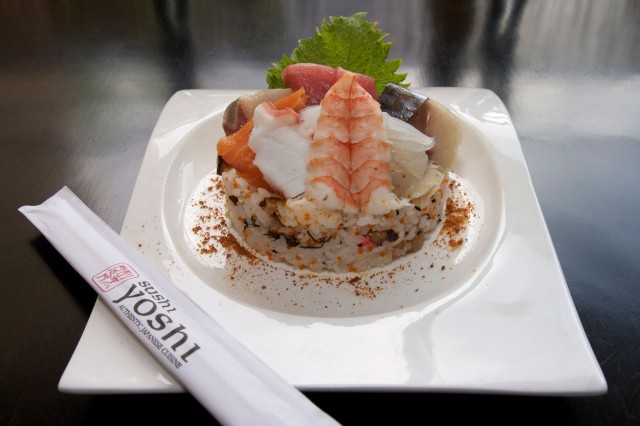 It recently dawned on me that location doesn’t seem to be a predictor of the quality of Boulder County Japanese restaurants. Sure, I’ve had fine Asian meals at the high-end downtown Boulder stalwarts. But I’ve also enjoyed equally satisfying repasts in strip mall joints and haunts tucked away in the corners of grocery stores. The latest example of an off-the-beaten path Japanese establishment that I’ve come across is Superior’s Sushi Yoshi.

This sleek establishment is located a California roll’s throw away from Costco; I suppose the resourceful could come here and enjoy a sushi dinner while having a set of tires mounted. Nevertheless, the menu here is more sophisticated and expansive than the restaurant’s location would indicate. Prices aren’t what one would call cheap, but they are in line with the high quality of ingredients and preparation.

Unsurprisingly, sushi variants as well as tempura, sashimi and bento combination meals make up the bulk of the menu. Sushi Yoshi isn’t the place for a rushed repast, as most food preparation appears to be to order, and one master sushi chef seems responsible for all the kitchen’s output.

Pal Mara and I started dinner with a pair of appetizers, a $4.50 helping of Agedashi and a $6.50 plate of Tatsutaage. Agedashi consists of fried soft tofu (quite possibly the hardest thing to pick up with chopsticks in recorded history) in a low-key sauce of dashi fish stock and soy. Dried bonito fish flakes contributed textural interest and the subtle but intriguing flavors masterfully contrasted against the relatively blank canvas of silken bean curd. Tatsuta-age, bits of fried chicken, was remarkably light in texture, but possessed surprising depth of flavor. A squeeze of lemon added a tangy accent to the poultry.

A miscommunication with the server resulted in Mara receiving a $16 lobster sushi roll instead of the $23 tempura dinner featuring this crustacean. However, there was little to criticize about this decadent roll, which adroitly contrasted crisp cucumber with creamy avocado and delicately fried shellfish morsels.

My friend rounded out her meal with a $6 side of veggie tempura. Unlike some restaurants that offer a fried batter closely resembling that of a fast-food fruit turnover, Yoshi’s gets it absolutely right with proper lacy texture. Another winning touch is that rather than serving a dish of cheaper vegetables such as carrots and onions, the offering here features such weighty produce as eggplant and squash.

My $25 Tsuru bento allowed me to sample a little of everything, including a bowl of not-too-salty miso and a wasabi dressed green salad. Besides the aforementioned tempura, there were also slices of clean-tasting and silky sashimi, including tuna, yellowtail and salmon. Simmered vegetables like earthy shittake and pumpkin evoked the best of rural Japanese fare. A piece of perfectly grilled salmon rounded out the meal.

In lieu of a more traditional dessert such as the green tea ice cream that accompanied my bento, Mara finished with a $2.75 portion of Kaibashira, or scallop sushi. She was particularly enamored by this attractive porcelain appearance of this mollusk, and lauded its “melt-in-your-mouth” texture and indisputably fresh taste. Perhaps the attractive presentation and top-notch quality of this seemingly simple seafood tidbit effectively summarizes Sushi Yoshi’s considerable virtues.