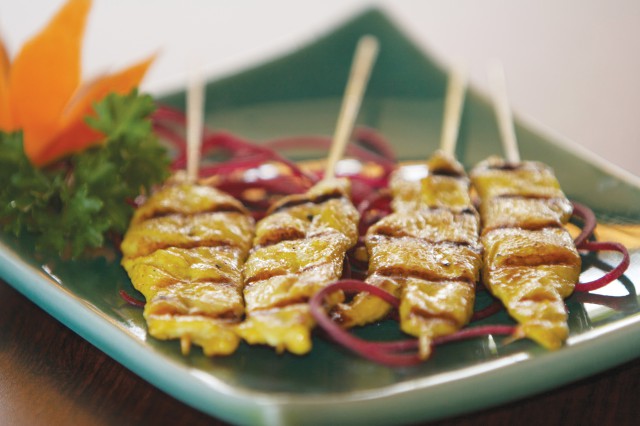 Allowing for very few exceptions, one of the chief tenets of my culinary belief system is that Asian food should be reasonably priced. This preference originates from a childhood consisting of many Friday night meals in Oakland Chinatown that clocked in at around $20 for the entire family. Nowadays, I might make a cost-related exception for a sushi feast or the occasional high-end Asian establishment like San Francisco’s Vietnamese-inspired Slanted Door, but that’s about it. Fact is, I still bristle over any bahn mi sandwich that costs more than $2.

One Boulder spot that amply satisfies my sense of food-related thrift is Thai Shi House, located at the intersection of Valmont Road and 28th Street. This predominantly Thai and Japanese eatery serves a number of specials for the price-conscious. These include a Monday-through-Friday patio deal consisting of dollar beers, $2 green salads, and $3 California rolls served from 3 p.m. to 8 p.m.

At lunchtime, they offer an $8.95 special consisting of white or brown rice and a choice of two Thai entrees, including several curries, such as the potato and squash-laced Massamon. For those with smaller appetites, a cheaper, single entree plate is also available. Colleague Carin and I both ordered the two-entree deal.

Service is cafeteria style, and I initially was a touch wary of this presentation mode. I realized then that my worries were also unfounded, as most Thai restaurant curries aren’t cooked from scratch when you order. It was also clear Thai Shi only prepares small quantities at a time for their serving table, so I wasn’t worried that my meal had sat out for an extended period.

As a matter of fact, the chicken Pad Thai tray was empty when I ordered, and minutes later, a server brought me a freshly prepared, piping hot and generously sized portion. Thai Shi’s interpretation holds its own with most other versions in town, featuring piquant but not overwhelming fish sauce seasoning, tender poultry and a bright squeezing of lime juice.

My other option, a ginger tofu curry, was an addictive blend of sweet coconut coupled with everyone’s favorite perky rhizome. While the sauce was a bit on the sweet side, partially due to the addition of several pineapple chunks, it didn’t detract from my enjoyment of the fried polygons of tofu.

Carin’s similar choice of tofu in red curry was similarly flavorful and also made for a satisfying selection. Her second dish, a mix of chicken and eggplant, spotlighted a luxuriously textured vegetable, resplendent in purple. The effect was a much richer-tasting dish than the ingredients would indicate, making for a winning choice.

To round things out, we also split a $9.95 sushi special, consisting of two rolls and a choice of soft drink or miso soup. We went for the miso soup, which had a more nuanced and not overly salty taste that was a pleasant surprise at this price point. While our twin rolls of yellowtail and salmon weren’t particularly fancy, the fish tasted uniformly fresh and clean, and the short-grain rice was properly seasoned. The price was comparable to supermarket sushi, but I felt it to be a superior alternative for the money, which more or less sums up Thai Shi House’s chief virtue.