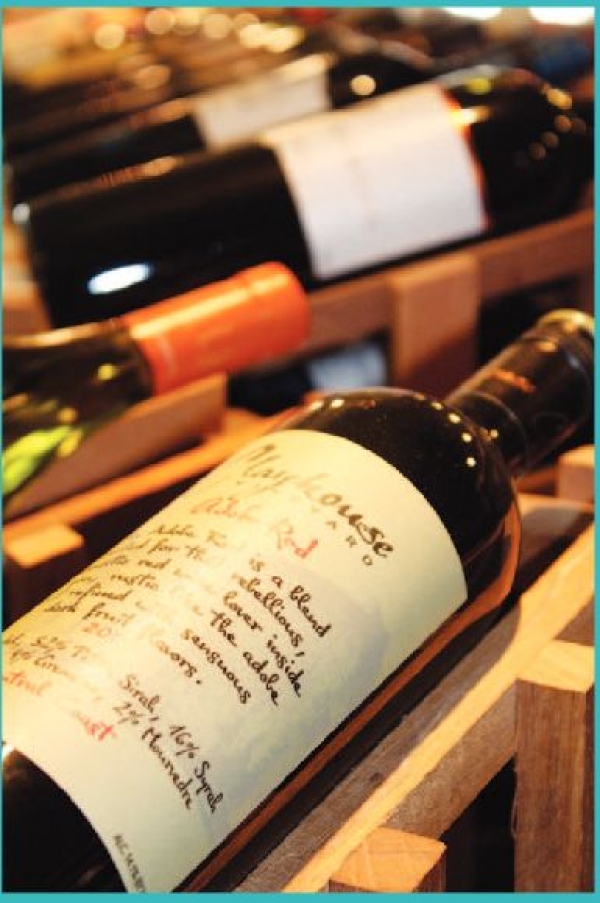 I`ve noted before that a waggish friend enjoys confounding the waitstaff at a local pizzeria by ordering one of their meat-laden specials, but with a peculiar twist. He roguishly requests a vegetarian Slaughterhouse. Having sampled the extended vegan menu at Boulder’s liquor store/ eatery, the Sun Deli, it appears my pal’s punch line has become a reality. While the deli still retains its selection of hot and cold sandwiches, pizzas, cheese steaks and other items that delight the carnivore, it’s also making great strides in broadening its menu for the meatless diner.

Sun Deli draws upon a substantial palette of ingredients to create its herbivorous fare. In addition to such well-known vegan brands as Daiya cheese and Gardein “chicken,” the deli also offers up seitan pepperoni and sausage. Other ingredients, some of which are made inhouse, include dairy-free mozzarella, seasoned tempeh, and an almond-based ricotta. It’s also worth noting that vegan versions of dishes here mostly cost the same as their meaty counterparts, and requesting a gluten-free pizza crust doesn’t increase the price.

Friends Amy, Isolde and Ray joined me for a dinnertime vegan feast. First up was the $7.49 “chicken” parmesan sandwich, available on a white or wheat roll. The texture of the vegetable protein, especially when swimming in an endearingly tangy marinara sauce, was hard to distinguish from genuine poultry. The faux mozzarella had a surprisingly authentic melted texture, although it still maintained the shape of small bits of shredded cheese. This was also the most potentially problematic ingredient, as too much of this dairy substitute can create a strong, artificially creamy flavor. In this case, less is more, and our filling sandwich had the right amount of cheese to provide richness without distraction.

Next out of the oven was an $8.79 stromboli, calzone’s cousin, stuffed with vegan pepperoni, sausage, onion, pepper and mozzarella. This is a gratifyingly dense turnover, with the “meats” giving off a pleasantly smoky aroma reminiscent of their cured counterparts. The crust added visual appeal with a nice gold en hue, set off by a whisper of crunchiness, and the cheese tempered the meat flavors.

Our $16.49 large white pizza with gluten-free crust was the easiest to reinterpret in a vegan version, as it contains no meat and includes such meatless toppings as olive oil, garlic and fresh basil. But it’s still heavy on the cheese, and this version contained copious amounts of mozzarella and nut ricotta. The verdict on this pizza? Although I’ve only had a few pizzas with vegan cheese and gluten-free crust, it was difficult to tell the difference between this pie and the dairy and wheat-based one. The simulated ricotta nailed the texture of the real McCoy and possessed a compelling natural creaminess.

While there’s the cynical comment that no one ever tries to make meat
taste like vegetables (Vegetarian Slaughterhouse, anyone?), that misses
the point of the Sun Deli. Many folks, myself included, are opting to
reduce their meat consumption for reasons of health, environment and
economics. Of course, I’ll still cop to cravings for such things as
sausage and pepperoni, and this establishment helps me happily indulge
that appetite with far fewer downsides. For anyone wishing to
incrementally reduce their meat intake, this is the place to enjoy
veggie fare that is, in the typically understated phrasing of friend
Amy, “Effing awesome!” Respond: letters@boulderweekly.com

While the difference between a calzone and a stromboli is somewhat ambiguous, both are a type of inside-out pizza.

Some argue that shape and stuffings define each, and a stromboli may be more of a rolled affair, while a calzone involves manipulating the dough into a pocket shape. Sun Deli’s calzone is filled with both mozzarella and ricotta, among other ingredients, although purists argue that ricotta is not a calzone ingredient. Also, the name stromboli derives not from the Italian volcanic island, but the 1950 neorealist film set there. Interesting choice, since neorealist films can be a wee bit depressing.