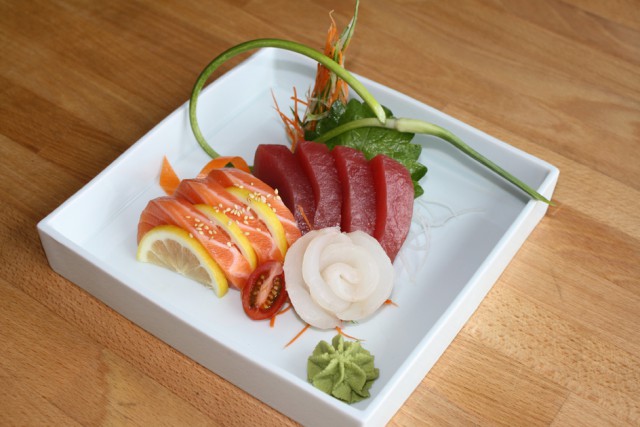 Film aficionados will doubtlessly recall the scene in Pulp Fiction when criminal kingpin Marsellus Wallace assures hitmen Vincent and Jules that their vexing body disposal problem will soon be solved. Wallace informs his assassins that none other than The Wolf, a well-regarded fixer, is on the case. Both Vincent and Jules breathe a sigh of relief, as The Wolf is known as the consummate professional.

I felt very much like Wallace’s minions upon entering the strip mall environs of Longmont’s Sushi Leo. Of the three sushi chefs behind the bar, I immediately recognized Mori-san, formerly of Boulder’s Sushi Tora. It took me a moment before I realized that another chef slicing fish was Craig Amidon. He has always impressed me with his meticulous attention to detail, as exemplified by his choice of using sake to rinse off uni, or sea urchin roe. The third chef also looked like someone I had encountered in the past, a younger veteran of the Boulder County sushi circuit. Like Vincent and Jules, I knew I was in good hands as soon as I seated myself at the bar.

Given the sushi expertise present, I chose to ignore such offerings as the Saturday shoyu or miso broth ramen lunch special and various bento boxes. Instead I focused on sushi specials, and my opening gambit was a $12 white fish lovers’ special, which I assumed described the color of the seafood. It did, and this course consisted of four pieces of nigiri sushi, including hirame (fluke), madai (sea bream), itoyori (golden sea bream) and isaki, which sounds much better than its English-language name, grunt fish.

Essentially, this was a connoisseur’s preparation, with each specimen being of uniformly sparkling freshness. The main joy of this dish came in comparing subtle differences of texture, oil content and flavor, and each fish had unique, commendable qualities and hints of seasoning.

Next up was $4 nigiri sushi servings of Copper River sockeye salmon. Having had the freshest possible Alaskan white king salmon sashimi (my brother had caught the fish) outside Juneau a few years back, I found Leo’s fish to evoke a favorable comparison. While the flavor was milder than expected, without a trace of fishiness, the sashimi’s sensual texture was unlike any other I’ve tasted.

As part of my $14.75 chirashi, or mixed sashimi over sushi rice, I did receive a typical Japanese restaurant green salad. Simply composed of lettuce, cucumber and bell pepper, this preliminary course arrived drizzled with a citrusy ginger dressing. Less of this pungent condiment would improve the overall flavor. However, I didn’t particularly mind this minor shortcoming, as I considered this course as nothing more than a diversion while the chefs focused on the fish.

The chirashi was well-executed, contrasting the fluffy texture of sweetened scrambled egg with the inviting firmness of perfectly cooked warm octopus. Other highlights included surprisingly creamy unagi eel and hefty chunks of tuna set off by a squeeze of lemon. Other adornments included bits of pickle and seaweed, adding a layer of complexity to the foundation of subtly seasoned sushi rice.

Despite its commercial center location, Sushi Leo delivers an experience comparable to, if not superior to, the area’s priciest Japanese establishments. Here, some of the best in the business work true magic with top-notch seafood.