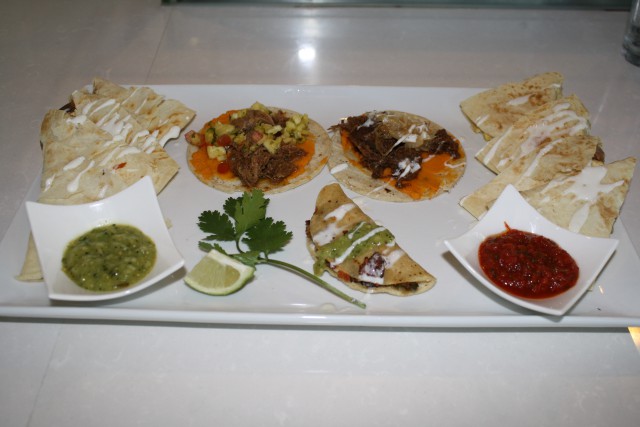 One of my pet peeves is the eatery that appropriates inexpensive ethnic food and gussies it up beyond recognition with little resulting benefit. Adding insult to injury is the establishment that jacks up the prices on affordable chow to something approximating the cost of a taco truck rather than the taco itself.

Speaking of which, I’ve been known to enjoy a street-style taco on occasion, and typically savor these tidbits in what I’d affectionately term “joints” versus more high-falutin’ eateries. Hence my initial apprehension at venturing out to Longmont’s Prospect neighborhood to visit the Comida Cantina, which possesses an unquestionably upscale, if not hip, atmosphere.

This cantina is the spinoff of the similarly named Mexican food truck, and was easy enough to spot on a Sunday night, as the namesake vehicle was parked outside. My apprehension receded a bit when I found the ambience to be pleasingly modern and vibrant, with a feel that was welcoming versus pretentious.

The menu here differs from most American Mexican restaurants as it tends towards ala carte items like individually priced tacos and gorditas in lieu of combo plates. However, such options as sides of rice and beans are readily available, and one can create a reasonable facsimile of traditional restaurant platters.

The opening move for pal Ann and I was a $6 queso fundido, the classic cheese dip. My point of reference for this dish was the version my dad made in the ’70s, and this was unquestionably a more upscale take. A $3 side of expertly seasoned chorizo set this preparation off, which could have benefited from a thicker consistency. Nevertheless, it captured the proper cheesy flavor and more than adequately stood up to its accompaniment of freshly fried tortilla.

Our tacos, both griddled and old school street style, along with a gordita and tostada, arrived on a single communal platter. One of our $3 tacos, “The Sirloin Situation,” provoked a brief moment of panic as I initially feared it was the product of a Jersey Shore influence. Happily, it wasn’t, and it consisted of meat simmered in Negra Modelo beer. While unquestionably tasty, the beef, with its soft, slow-cooked texture, wasn’t as appealing as the toothsome arrachera, Comida’s take on grilled carne asada.

Of the $2.50 griddled tacos, the bacon and jalapeño combo was our unequivocal favorite, skillfully balancing smoky and spicy. Heartbreakingly tender pork, cooked in a bath of Stella Artois and garnished with a pineapple habanero salsa, was another winner, successfully evoking pastor-style selections.

“It’s like a Mexican Shepherd’s pie,” proclaimed Ann upon sampling the $4 chorizo gordita, a hefty and heady blend of sausage and roast garlic mash tucked in a dense masa pocket. Among the meatless choices, a $3 mushroom tostada held considerable vegetarian appeal, with a satisfyingly hearty texture deepened by the aforementioned garlic mash.

One of Comida’s strong points is that it remains faithful to the original cuisine without resorting to such pretentious gimcrackery as “truffled tacos,” as Ann put it. While nontraditional ingredients such as smoked gouda appeared in items like the griddled taco, they were definitely enhancements rather than distractions. Comida also succeeds as a place to introduce the novice, who may be intimidated by a more downmarket location like a taco truck, to the charms of Mexican street food.