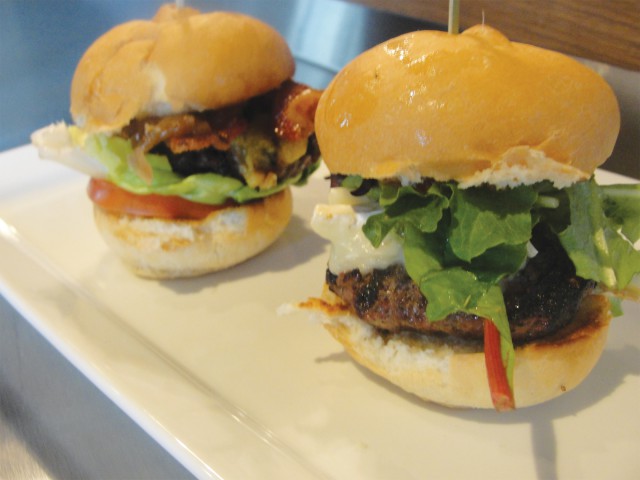 Burgers are a thing nowadays, and a new spot, Boulder’s Drakes Haus, has jumped firmly into the fray, identifying itself as the “Home of the Merlot Burger.” Drakes also sports a logo spotlighting what one presumes is its namesake’s visage, a bespectacled and distinctively bearded fellow. For reference’s sake, the logo’s facial hair falls somewhere on the scale between a certain former San Francisco Giants pitcher and ZZ Top’s Billy Gibbons.

A full bar, inviting deck and unique menu choices, including portobello, chicken and falafel sandwiches, as well as sausage skewers and caprese salads, differentiate this modernist venue from other burger joints. Besides beer and cocktails, espresso drinks and milkshakes are also on tap.

While burgers sans merlot are also available, we opted to try the signature vino-infused patties, and I quickly concluded adding wine is no mere gimmick. The ingredient created an appetizing complexity and depth of flavor that truly elevated this burger’s taste in the same way Burgundy lifts simple chicken stew into Coq au Vin.

For those accustomed to fast food monstrosities, the burgers here may appear on the small side, falling somewhere between a slider and a chain restaurant single. However, pairing a single burger with a side, like fries, makes for a more than adequate lunch.

Speaking of fries, there’s much to recommend Drake’s take. A $2 side of Med fries doesn’t refer to portion size, but rather to the Mediterranean adornments of fresh basil, feta and lemon juice. These garnishes contributed a bright contrast to the earthier virtues of these potatoes, which had a perfectly crisp and golden exterior winningly accented by bits of skin.

My friend opted for a weightier side, a $5.95 bowl of macaroni and cheese, updated with prosciutto. The pasta retained the endearing creamy and tangy qualities of this classic without being too heavy, although adding cured meat may have been unnecessary. I also felt this was the one item of our lunch that didn’t offer as much value as our other selections.

We concluded with a $3 bread pudding drizzled with bourbon sauce. Some versions of this dessert can be off-puttingly leaden, and in this case, the pleasing texture approximated a richer take on French toast. The sauce’s sweetness could be dialed back a half notch, as sugar detracted from the more delicate qualities of this condiment. On the other hand, I’ve paid much more for bread pudding that wasn’t nearly as good.

Drakes successfully fills the gap between fast food burgers and their tonier, sit-down, white tablecloth cousins. For the money, you’re unlikely to find a better tasting burger, and one could easily spend two to three times as much to enjoy a sandwich with comparable flavor qualities. For a quick and reasonably priced burger with a distinctive gourmet sensibility, Drakes Haus will likely be my go-to spot.