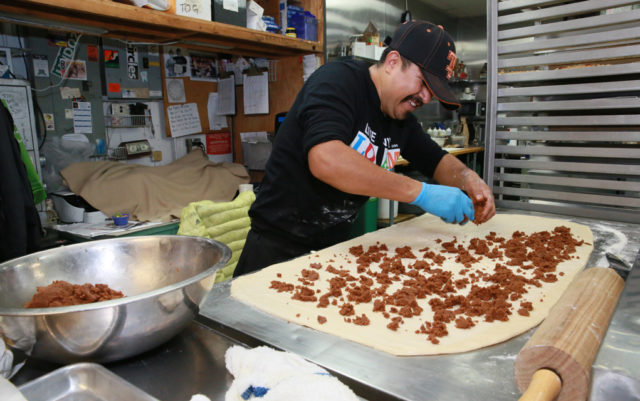 Nobody can say for certain how cinnamon rolls became Colorado’s signature roadside pastry, but as I’ve traveled the state from Boulder to Grand Junction I’ve encounter one “famous” and “huge” cinnamon roll after another. The treat is so quintessential that Jan. 8 was proclaimed as Colorado Cinnamon Roll Day after a successful campaign by a Fort Collins grade school student.

The driving distances are significant in Colorado and many a family has survived the experience on the promise that there was a sweet treat waiting at Johnson’s Corner, Vern’s Place, Winona’s, Lucky’s or Moe’s. It would be expansive, warm, perfumed with cinnamon, sitting in a puddle of translucent glaze, and served with a cup of caffeine in a white mug.

While I can’t personally recommend the combination, there are even parts of Eastern Colorado, as well as Nebraska, Iowa and Kansas, where red chili is popularly served over a fully glazed cinnamon roll.

It’s important to know the difference between a cinnamon roll and bun.

“If your pastry is coiled, it’s a roll. A proper roll should also be glazed; a proper bun should not,” wrote cookbook author David Rosengarten. We don’t know about the glaze thing, but generally cinnamon rolls are lofty after being baked in a confining pan. Buns are individual and tend to spread out.

Some fans prefer slowly uncoiling the roll and dunking pieces briefly in tea or coffee. One result is a beverage far better than any pumpkin spice latte. I think well-aged one- or two-day-old rolls are really a better dunking vehicle than fresh ones … and always cheaper.

Cinnamon rolls are quirky expressions of the bakers themselves. Start sampling the diverse Colorado rolls listed below and you discover there are bready rolls, some biscuit-like, others puffy or croissant-like with varying degrees of crunch, chew, spice and frosting.

Johnson’s Corner Café, I-25, Exit 254: Since it opened south of Loveland, Johnson’s Corner Café has built its fame among truckers and travelers for its classic yested rolls. The company produces 15,000 cinnamon rolls a month (sold in eight states) but the best place to taste them is in the dining room with a side pitcher-ette of sweet white glaze. Roll Flavors of the Month range from peach to raspberry lemon. (johnsonscorner.com)

Duffeyroll Café, Denver: Born in 1986, Duffeyroll’s pastries are sweetly crunchy on the edge (and dunkable without dissolving). The middles are moist and softer. Glass cases display three sizes of Duffeyrolls in six flavors each. The original cinnamon-y flavor is recommended. Skip the English toffee or Irish cream glaze. (duffeyrolls.com)

Walnut Café, Boulder and Lafayette: Famous for pie, the Walnut also bakes a righteous cinnamon roll served warm with sweet glaze, confectioner’s sugar and butter. The substantial bready spiral has a nice hint of nutmeg. Call ahead and be there when they roll warm from the oven. (walnutcafe.com)

Moe’s Broadway Bagels, Boulder and Denver: The early bird gets one of the the limited number of Moe’s cinnamon rolls baked daily. They are dense in a good, bagel-like way with cinnamon sugar swirls and white icing, ideal for dipping in coffee or chai. (moesbagel.com)

Slice O’ Life Bakery Cafe, Palisade: I’m usually a cinnamon purist when it comes to breakfast rolls but at this earthy, fruit country landmark in an old brick building I go for the peach, blueberry and raspberry cinnamon rolls (not to mention the plum peek-a-boos). (sliceolifebakery.com)

Daily Bread, Montrose: A real Mom-and-Pop bakery makes a spectacular cinnamon roll — soft and sweet, but not too sweet, with layers of raisins and cinnamon throughout.

Winona’s Cafe, Steamboat Springs: In the battle for size supremacy in Colorado cinnamon rolls, Winona’s has taken the cake since 1967. The size of a dinner plate, the fresh, cinnamon-laced, yeast-raised swirls are coated with thick, sweet cream cheese frosting. (winonassteamboat.com)

Roll call of other sweet
destinations

Comida, Rayme Rossello’s fine Mexican eatery in Longmont, will close Oct. 28. Comida continues at Denver and Aurora locations. … Barwachi Biryanis is open at 390 McCaslin Boulevard in Louisville. … The Slow Money Institute’s SOIL conference includes a block party 4:30-7 p.m. Oct. 16 in front of the Boulder Theater with local fare including pretzels (On Tap Kitchen), fermented foods (McCauley Family Farms) and ales (Asher and Lefthand Brewing) plus a screening of Look and See: A Portrait of Wendell Berry.

“Baking is not a small act at all; it’s an act of love, it’s an act of charity, it’s an act of kindness and compassion. I hold that in my heart every time that I bake — that something as simple as a chocolate chip cookie might mean the world to someone.” — Karen Ash