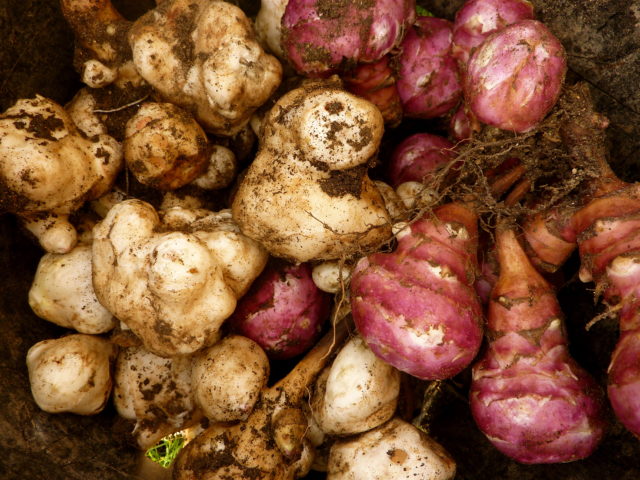 Like parsnips, sunchokes keep in the frozen ground through the winter and be dug up in spring. Also known as Jerusalem artichokes, they have nothing to do with either Jerusalem or the thorny artichoke.

A native American plant, the tubers were used for food by American Indian hunter and gatherer societies. They were introduced to Europe by the French explorer Samuel de Champlain, who found them growing in 1605 among the Abenaki tribe on Cape Cod. They quickly made their way to France, and by 1609 were mentioned in Histoire de la Nouvelle France. There, they became known as topinambours, the French word for tuber. They made their way to Italy, and the Italian name, girasol, which means following the sun, became corrupted in English as Jerusalem. These delightful plants quickly traveled across Europe, and are listed as “Artichocks of Jerusalem” in a 1620 edition of the Oxford English Dictionary. However, they did not become as popular as the potato or tomato, perhaps because John Goodyer, an early horticulturalist, described them as “a meat more fit for swine, than men” as they can cause flatulence for some. An old wives’ tale that linked the bulbous tubers to leprosy because they resembled deformed fingers also contributed to the disfavor of the sunchoke.

A few years back, a friend gave us some tuberous roots of this cheerful yellow flower to plant in our yard. Today we have several clumps, and only disturb each every few years, giving them time to reproduce underground so we can enjoy the bright yellow flowers in the summertime. They can be dug up as soon as the ground opens in spring, or in late fall before the ground freezes. We harvest an 8-quart basket of tubers from each patch, being careful to leave some in the ground for future growth.

Helianthus tuberosus is a native American sunflower, a hardy perennial that prefers cool climates and grows well in our poor mountain soil. In fact, the Virginia Tech weed identification guide calls it “a weed of pastures, hayfields, and roadsides.” But this weed that stores the sun’s summer rays in its luscious roots is beautiful, nutritious and tasty.

Today, this delicious, healthy vegetable is experiencing a comeback. Home gardeners find it easy to grow and enjoy the blossoms as well as the crisp, yummy tubers. Low in calories and sodium, fat and cholesterol free, sunchokes are recommended for those with Type 2 diabetes because they contain inulin, a carbohydrate that breaks down slowly into fructose rather than glucose, and thus does not cause blood sugar to rise rapidly as do potatoes, rice or pasta. Inulin also promotes intestinal lactobacilli, probiotic bacteria that aid digestion and help with absorption of calcium and magnesium. One serving of sunchokes contains more iron than a hamburger. They’re also high in potassium, vitamin C and thiamin, and contain phosphorus, magnesium, niacin, vitamin B6 and riboflavin.

At the market, look for sunchokes that are firm, moist and smooth, without sprouting, green spots or blotches. Often, they will come wrapped in cellophane, so they may be hard to inspect. Store them in the refrigerator, wrapped to prevent moisture loss.

To prepare, scrub clean with a vegetable brush. You can cut them into crudits to eat with dip, or julienne for a salad. They’re delicious roasted, and can also be baked, steamed, stir-fried or cooked in the microwave. They pair well with nuts, other root vegetables like carrots, parsnips or sweet potatoes, and herbs like sage, marjoram, parsley, basil and garlic. They’re great added to salads of all types: green salads, slaws, fruit salads, pasta, rice or potato salads, or even chicken, turkey or ham salad.

These make a great hors d’ ouvre as is. They’re also great on top of a salad of tossed greens or stirred into cooked pasta or grains and seasoned with herbs. You can also add other root vegetables, like beets or carrots.

In small skillet, melt butter or heat oil; peel and dice the onion; sprinkle with 1/4 teaspoon of the salt; cover and cook slowly over low heat 20-30 minutes, stirring occasionally.

In bowl, beat eggs with 1/4 teaspoon of the salt. Beat in cottage cheese and 3 Tablespoons sharp cheese (reserve 1 Tablespoon for topping). Set aside.

Grate the sunchokes into a bowl; you want about 2 cups. Sprinkle with 1/4 teaspoon salt and 1 teaspoon lemon juice (to prevent browning). Place half in the bottom of the prepared casserole dish, and set the rest aside.

Now layer the carrots, then the rest of the onions, the rest of the parsley and optional ham, and the rest of the cheese mixture. Top with remaining sunchokes. Arrange broccoli florets on the top, sprinkle with reserved Tablespoon of grated cheese, and bake 45-50 minutes. Let cool about five minutes before serving to avoid burning your mouth on the hot cheese.