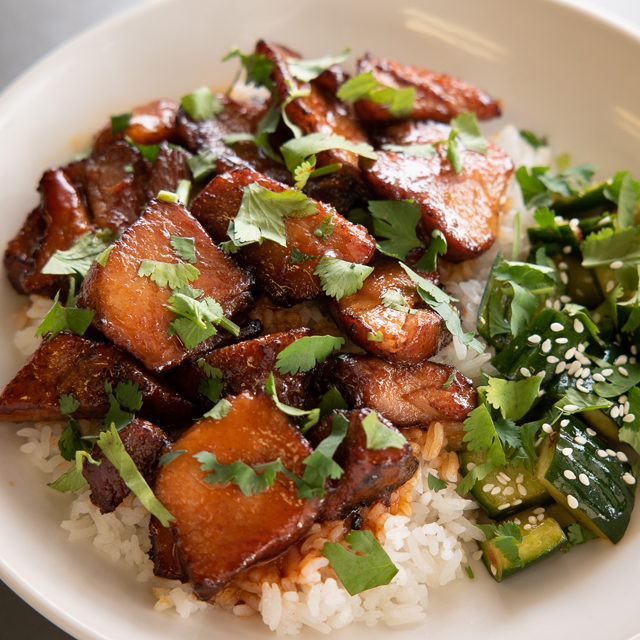 In a couple weeks, you’ll be able to walk into a building in downtown Boulder, eat a West African peanut butter stew, wash it down with a craft cocktail, dip into some Asian street food or, maybe, satiate your sweet tooth with a hand-made bonbon, and then tango with 40 of your newest friends, or put on headphones and watch a movie, or sit in a rooftop cabana in front of a fire pit as the night grows old.

This is the vision for Rosetta Hall, one of two food halls opening this year in downtown Boulder. CEO Donovan Greene, who designed and built Rembrandt Yard 15 years ago, has been working on the project for two and a half years. That work involved visiting more than 50 food halls around the world to “see what was working and what wasn’t.”

“The first thing we found that works is good food, which I think people kind of overlook sometimes — the food’s got to be fantastic,” Greene says. “Number two for us was having successful chefs. [We wanted to] find the best chefs we possibly could and create an environment where they do well financially. … And then the third thing for us is sourcing sustainably. And that’s hugely important.”

The space still needs some finishing touches, but most of the stalls in the food hall are complete, and each has a chef ready to occupy the space. Greene says he talked with local farmers and ranchers about the chefs they work with most often to try to find people who might be a good fit for the ethos of the food hall. That search turned up an array of chefs, and the lineup spans the globe.

Jacaranda will serve West African food and is helmed by former Stone Cup chef Modou Jaiteh, who was raised in The Gambia and learned to cook from his mother. Julia Wirichs spent eight years baking in Amsterdam and Paris before returning to Boulder to open the Petite Fleur patisserie in Rosetta Hall. Chef Dustin Brandt is bringing casual French food to his space, Confit, including a made-to-order soufflé program. The Folsom Foods stall will serve Colorado-cured charcuterie plates, breakfast sandwiches, burgers and more courtesy of Justin Brunson of Denver’s Old Major.

There’s a stall that sells dishes prepared with ancient grains and legumes (Eridu). Ginger Pig’s Natascha Hess is moving into less mobile digs with her Chinese, Thai, Vietnamese and Japanese street food. Alberto Sabbadini, formerly of Meadowlark Farm Dinners and The Kitchen, is serving Roman-style pizza and a particular sandwich from Bologna, the tigella (pictured on page 44), which is freshly fired bread stuffed with Italian meats, cheese and vegetables. And Chef Joe Lee is marrying contemporary Mexican fare with Korean elements at Tierra.

There’s a cocktail program and full bar, and Boxcar Coffee Roasters will be brewing drinks in the front of the space.

The business model of Rosetta Hall enabled Greene to find chefs from a wide variety of backgrounds that otherwise might not be able to afford to launch out into a brick-and-mortar location.

“Our job is to take care of everything that’s binary, that’s pass-fail, and for all the chefs to have as little to no risk as possible,” Greene says. “So nobody pays anything to be in here. Our whole motto is if the food’s great, and the person’s lovely to be around and they care about where they’re sourcing from, then we want them be a part of the project regardless of whether they can come up with $100,000 in capital or something.”

Rosetta Hall pays for all the equipment for the chefs, they maintain the equipment, and they do all the chefs’ accounting. They pay for food and labor costs. They wash the chefs’ dishes and pots and pans. Greene says the payoff for Rosetta Hall is a 22 percent management fee, which he says is one of the lowest in the U.S. “Radical transparency” of the financials is important for Greene, and he says any of the stall operators can ask how much any part of the Rosetta Hall operation is making at any given time. Chefs, meanwhile, have complete control over their menus and they determine pricing. And there’s no cap on how long a chef can stay in a stall — if it’s working for them, it’s working for Rosetta Hall, Greene says.

Greene says the coincidence that another food hall, Avanti, is opening in Boulder this year speaks to a larger need for the local food scene to accommodate chefs and restaurant owners.

“We hear a lot of the same complaints about [how] the barrier for entry is so high,” Greene says. “There are less mom-and-pop spots [in Boulder now] and more Norwegian conglomerates of outdoor clothing. We’ve got 10 spots and two bars here, but there’s so much good food that we’re missing.”

Greene borrowed elements from around the world to design the aesthetic of Rosetta Hall. The bar came from El Nacional in Barcelona, one of Greene’s favorite food halls in the world. Marble trivets that keep cookware and the food inside it warm came from Pizzeria Locale. Millwork around the stalls came from Denver’s Union Station. The signage came from a market in Lisbon, Portugual. It’s a unified, clean, high-end aesthetic, from the food stalls to the big wooden bleacher seating to the DJ booth and stage at the top of the bleachers to the pristine rooftop space, with glass-encased firepits, a bar, turf, a bamboo forest and cloth-sheathed cabanas.

“Just like we’re a chef-driven food hall, we’re also dancer-driven nightclub,” Greene says, adding that the club program is curated by members of the Colorado dance scene, with rotating themes or styles of dance promoted on any given night of the week. There is also a massive screen that rolls down in front of the DJ booth, and guests can pop on a pair of headphones to listen to the movie being screened, or head to the rooftop for a second video screen. After all, the space used to be a movie theater.

It’s not every day 10 restaurants open at the same time in Boulder County — but you can expect that when Rosetta Hall opens in early October.