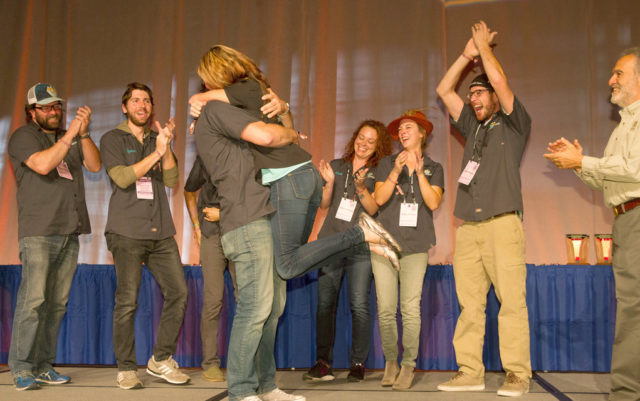 It’s all about you guys!” Great American Beer Festival director Nancy Johnson yelled to the brewers packed into the Denver Convention Center’s Mile High Ballroom. Every seat was filled and hundreds more stood against the wall, all eagerly waiting to see if their hard work would pay off; if their beer would take home a medal; if they were going to get that time-honored fist-bump from GABF founder Charlie Papazian for a job well done. Tom Petty’s “Runnin’ Down a Dream” fittingly provided the soundtrack to the promo video prior to the festivities, paying tribute both to the late rocker’s passing and the spirit of the brewers who had gathered there.

“You guys are the model,” Colorado Governor John Hickenlooper said in his address. “May you continue to light up our future.”

Hickenlooper took a moment to reflect on his beginnings, recalling that when he and his partners signed the lease for Wynkoop Brewing in Denver’s LoDo District in 1987. They did so at $1 per square foot, per year. At the time, they were ridiculed for their foolish choice of location. Five years later, construction workers broke ground on Coors Field a block away and they didn’t look quite so foolish anymore.

Since then, Hickenlooper has gone on to serve as Denver’s mayor and Colorado’s governor. Who knows what political aspirations any of the 2,217 brewers at this year’s GABF had, but Hick was proof that career changes aren’t out of the question.

Yes, 2,217 breweries submitted beers — 7,923 in total — in 98 categories to see how they stacked up. The largest category was, predictably, American-style India pale ale with over 400 different beers vying for the coveted gold medal. Colorado didn’t walk away with that one — Hailstorm Brewing of Tinley Park, Illinois, won the honor for their Prairie Madness — but the Centennial State did net 38 medals, including 14 golds.

Moondoor Dunkel’s silver was Wibby’s first GABF medal but the win was quickly overshadowed by another momentous occasion when co-founder and brewmaster Ryan Wibby dropped to one knee and proposed to girlfriend Robin Bower while the crew was taking their celebratory photo on stage.

The GABF is all about the brew, but it’s also about the families that develop at these businesses. As Hickenlooper pointed out, people mistakenly view the West as a vast frontier populated by rugged individuals who made their own way and blazed their own trail. In truth, the trappers that first came to Colorado did so in teams, relying on each other to make it through cold winters and lean sales. The same could be said of the brewers here. No one can do it alone.

Besides, a beer tastes better with company.