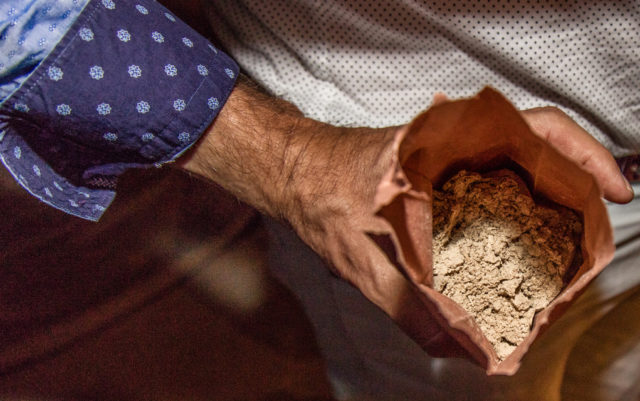 Not too long ago, Winn Kirkpatrick was living in Texas. A father to three young boys, one with autism who struggled to communicate and suffered from seizures. Skeptical that natural remedies could help his boy, Kirkpatrick says he was jealous that there were people in the world who believed things you bought outside a Walgreen’s pharmacy counter could make your life better.

“Jealous, but I thought, ‘Oh, it’s just a crock of horseshit for the most part,’” Kirkpatrick says. “But the more we read about [naturopathy] and the more we started doing stuff with Benjamin…”

Kirkpatrick and his wife had started giving their son, Benjamin (name changed), doses of CBD, which they’d read could help children with autism. Three days into treatment, Benjamin, who had said maybe nine words in his life, had made a remarkable breakthrough.

“He dropped a quarter,” Kirkpatrick says. “‘No mama, that’s my money.’ That was the biggest sentence he ever said.

“You had to see it to believe it. I will never forget that day.”

The seizures stopped. The words came flooding out of the boy. So the Kirkpatricks up and moved to Colorado, where CBD is more easily accessible. Sight unseen, they bought a house near Colorado Springs. They’d both been working in the restaurant industry, Kirkpatrick for almost half his life. That experience helped him open the esteemed Rooster’s South of Ramen in the Springs with Chef Mark Henry. And so life was good, by all accounts; they didn’t need to look for more change. But when his wife started working at a bar serving kava, and after sampling the natural anxiety-reducing tea, Kirkpatrick felt the urge to dive deeper into naturopathy and use his restaurant industry experience to take the plunge into ownership.

“You raise bartenders to know how to run a business in the industry,” Kirkpatrick says. “The ideal world is to have them open up their own bar, so we decided the route we wanted to go.”

With the help of two of the people running that kava bar, and a fourth person, Kirkpatrick found that route brought them 100 miles north to Boulder, where they opened up the city’s first kava bar.

After a few permitting hiccups, The Root Kava Co. opened in the Village Shopping Center in Boulder about a month ago. Immediately, Kirkpatrick noticed a funny thing happening among the early patrons, something that if he hadn’t known how natural products opened his son up to the world he may not have noticed: when people drank kava, they opened up, too.

“[Kava] is something for people to gather around,” he says. “It’s anti-anxiety, anti-stress. It produces a calming effect on the body. Introverts come in and they won’t talk, but within 30 minutes, they’ll drink kava and start talking to everybody.”

Kirkpatrick says it’s been eye-opening to see how kava, and the atmosphere he’s helped create at The Root, connects people.

“Completely different stereotypes of people come in and start talking to each other,” Kirkpatrick says. “I’ve worked in a bar since I was 16. You see so much drama. It’s a testosterone-fueled [environment]. It’s nice to see people have fun and relaxing [at The Root].”

Kirkpatrick and the three founders created The Root to straddle the line between coffeehouse and bar. They want people to do work and hold meetings there, but they also want people to come and socialize, to listen to live music (which they have once or twice a week). They generally limit serving kava to patrons 18 and older, but Kirkpatrick says it’s a family-friendly environment.

And it all revolves around this natural ingredient called kava. Originally developed and cultivated in Polynesia, kava has slowly been spreading around the globe for its sedative and anxiety-reducing properties. It’s considered a dietary supplement, and so is not regulated by the Food and Drug Administration. It doesn’t produce a hangover, and only comes with side effects if you drink too much or too fast (even then, it’s just a stomachache), and it doesn’t impair driving or central nervous system function.

Kava root extracts, pills and powders are available in natural foods stores already, but producing traditional kava tea extracts more of the essential elements that produce its relaxing benefits. The Root double-brews the kava, which extracts more of those beneficial compounds, and uses only noble kava, which is manufactured by kava producers overseas to be pristine and produce effects that are neither too weak nor too strong.

Now, kava doesn’t taste great. A favorable description of its flavor would be “earthy.” But The Root uses a special vinegar-based mix that helps cut the flavor to make it more palatable.

Boulder’s been kind to The Root in its initial days; Kirkpatrick says the health-concious community has allowed them to not have to educate people to just get them through the door. Still, though, there are plenty of people who come in not knowing what to expect.

“This is noble kava. Another name of the kava root is pepper root. We had a guy come in who drank kava and sat there for a while, then came up and said, ‘My mouth is on fire. It’s kind of numb. Am I allergic to it?’ I said, ‘No, it’s totally normal.’”

Kirkpatrick has had to stop people from ordering more kava before he thinks their stomachs are ready for it, too — “It’s bad for me because I’ll lose money, but I want people to have a good time.”

The effects of kava last about 45 minutes to an hour per cup, and Kirkpatrick says several patrons will stop in to load up for the day. He himself tends to drink kava throughout the day.

The Root rounds out its menu with other natural foods drinks — kombucha, kratom (another herb with similar effects to kava), ginger beer and, fittingly, CBD tonics. The full embrace of naturopathy represents the completion of a full circle for Kirkpatrick, and he’s happy to share his story with the public. But, like he says, seeing is believing.