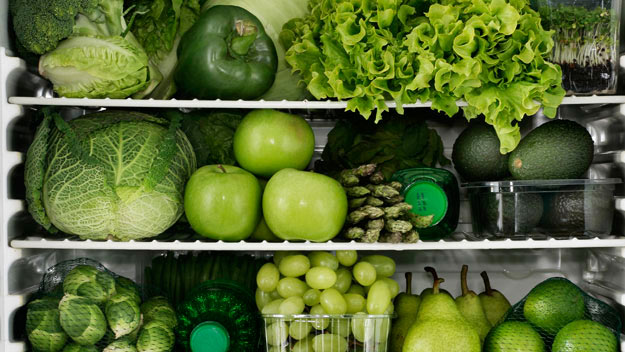 We take it for granted that the refrigerator light goes off when we shut the door. But perhaps fridges of the future will be different, as new research suggests exposing fruits and vegetables to light during storage could make them more nutritious.

Plant parts, like leaves and roots, keep living after having been separated from the plants on which they grew. For days, weeks, even months after being harvested, the component cells of these plant parts can carry on with their metabolic functions. That is why you can grow fresh food by upcycling kitchen scraps: tinyurl.com/regrow-veg.

Most any item that hasn’t rotted to the point of inedibility can be considered living. This is one of the selling points of a raw foods diet, as living foods contain enzymes and other molecules that cooking destroys.

A paper published in Current Biology during July of last year indicates that cyclic exposure to light and dark causes fruits and  vegetables to regulate their cellular metabolism such that the amounts of certain compounds are increased, some of which are beneficial.

The paper’s researchers, based at Rice University and the University of California at Davis, have published previously on the phenomenon of “entrainment” in plants. Entrainment refers to the programming of an organism’s circadian rhythms into certain routines.

The group had examined how exposure to light influences the ability of Arabidopsis, a plant in the cabbage family, to ward off insect damage. They found that the plant ramps up its levels of natural insecticide chemicals shortly before dawn, when insects begin feeding. In a controlled experiment, the researchers were able to use light/dark cycles to dramatically slow the rate at which caterpillars devoured a leaf.

According to one of the team’s leaders, Dr. Janet Braam of Rice University, one category of insect-discouraging chemical, glucosinolates, is known for anti-cancer properties in human, and she says there might be others.

“We have found that two plant hormones that are critical for plant defense are controlled by the circadian clock, that is, their levels vary depending upon time of day. We hypothesize that these hormones regulate the levels of metabolites important for defense,” Braam said via email.

Her team’s new paper examined the effect of simulated day and night cycles on the internal clocks of blueberries, spinach, lettuce, carrots and squash. All of these exhibited entrainment in response to light.

“It is surprising that carrots responded to the light/dark cycles because they are typically underground and not, therefore, exposed to light,” Braam says. “However, the carrot cells retain structures that are related to chloroplasts [plant cellular structures where photosynthesis takes place] and perhaps in response to light these structures remain light responsive.”

This research could have implications not only for how food is stored, but how it’s prepared, and when.

The jury is still out over whether micromanaging your produce’s internal clocks will yield enough health benefit to justify the trouble. But maybe, someday, refrigerators will have crisper lights to mimic outdoor daylight. Or even if the refrigerator light is destined to remain off when the door’s closed, this research might open other doors into our understanding of how post-harvest treatment of plants affects their nutritional values.

It also adds more nuance to the idea of living foods, and begs questions about what other environmental cues they can be responsive to.