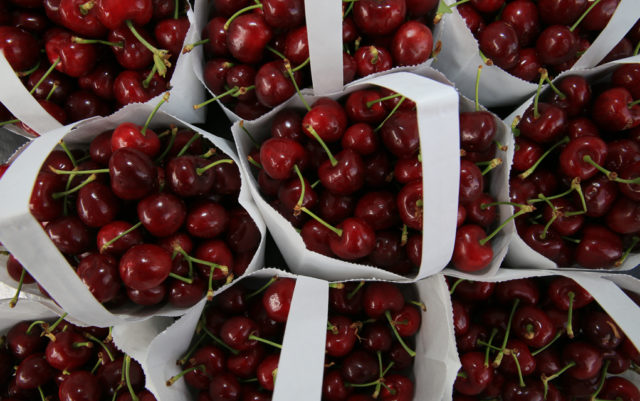 Sometimes I’m just not in the mood to deal with the Boulder Farmers Market. Don’t get me wrong. I’ve been a supporter since it first opened, and it is one of the nation’s best producer-run markets. It deserves to be a popular destination.

On nice summer Saturdays and Wednesday evenings, the Boulder Farmers Market is happily crowded with lines for food and lots of kids, bikes and strollers. Parking is available but still a challenge.

Look, it’s like going to any “event” — it requires a time commitment. That’s fine on a day off, but for a lot of folks it makes it hard to grab fresh ingredients and head home. That’s why it’s often easier to swing by one of Boulder County’s summer farm stands instead for local produce.

There is an event of a different kind in Lafayette, 4-8 p.m. Thursdays, that seems to meld the best of the market and the stand into a smaller package. The Lafayette Farmers Market is set on a street you probably haven’t ever driven down. Simpson Street east of South Public Road is a historic neighborhood with old storefront, but only a handful of businesses including Odd13 Brewing. Simpson Street feels like a small-town Main Street.

The Lafayette Farmers Market, which is operated by the Boulder Farmers Market, has much less to offer… and that’s a great thing. At only two blocks long, it takes just a few minutes to stroll through and it’s much less crowded. It’s the kind of market where you can park easily and pick up something quickly or hang out and shop with a pupusa in one hand and craft ale in the other. That’s because the entire Lafayette Farmers Market area is a fenced beer garden, and there are shaded seating areas with live music tucked between buildings.

What I discovered was that fewer vendors means more breathing space and less hubbub, so I actually spent more time visiting each vendor, and there are some good ones.

In its low-key, intimate way, the Lafayette Farmers Market does exactly what farmers’ markets and stands have always done: Make fresh local vegetables available to more kinds of people more easily while offering farms and food businesses a space to test their concepts.

Bacon, Beans, and Beer, which won the “Eating the West” award from the Mountains & Plains Independent Booksellers Association, goes on my shelf next to 1997’s Buckskin, Bullets and Beans (Northland). That collection from the Western Writers of America includes a good recipe for Elmore Leonard’s Barbecue Red Snapper.

taste of the week

Edwards, a small town at the base of chic Beaver Creek west of Vail, is the unlikely culinary hot spot in the mountains these days. Among the taste attractions is an exceptionally good fried chicken appetizer served at The Rose, a funky bar/bistro tucked away in the Riverwalk. The kitchen first slowly cooks top-notch boneless breast sous vide with fresh herbs. Then, it gets a thin, crispy jacket that’s fried crunchy. Drenched in sage-honey syrup and sided with pickled veggies, it made me grin. The accompanying mojito is optional.

“Sit around the table with family, friends and strangers sharing food and wine. The table is the great equalizer. Conversations generated around the table have stopped wars, created friendships, exposed talent and extended love.” — Chef Jacques Pépin