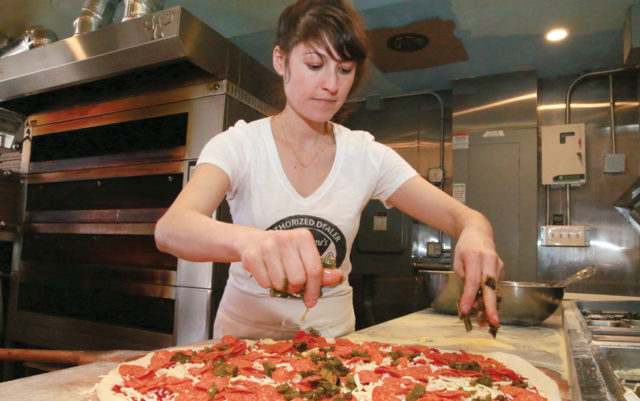 Audrey Sherman was studying journalism in Italy when she fell in love with and dedicated her life to pizza. Anyone who’s faced the specter of a blinking cursor on a blank page, or had Microsoft Word indent half their story and insert, like, diamond bullets mid-sentence for no reason, can tell you it wasn’t the first time a pizza tempted a writer away from their work.

Rarely, though, does it result in something like Audrey Jane’s Pizza Garage, a popular upstart slice shop that’s made East Coasters bite their tongues after years of smug iterations of “You can’t get good pizza in Colorado.” (Full disclosure: I’m not only aware of this belief system, I’m also a client.)

But Sherman has a lot in her favor: training from renowned San Francisco pizzaiolo Tony Gemignani, close family from Sicily and New York, and a culinary degree from Le Cordon Bleu. And while she brings perfectionism with her into the kitchen, what keeps her grounded is the attitude that everyone’s perception of “good pizza” is different.

“I’ve learned you can’t live up to everyone’s expectations. As long as I’m putting out a good product every night, I’m happy,” Sherman says.

There’s a Portuguese word, saudade, which refers to a feeling of deep love and nostalgia for something gone or that never even existed. That’s kind of a heavy concept to bring up in a conversation about pizza, but Sherman says she’s seen how pizza represents more than the sum of its parts in a similar way. She saw pizza as “a lifestyle” in Naples, where a pie is one or two Euro and is so routine that pizza makers don’t bother to put out their cigarettes while they make them. So too is pizza revered on the East Coast, where you can pick up a face-sized slice for a dollar outside the Port Authority and scarf it down before you get on the bus.

Pizza is so connected with place that it infiltrates some peoples’ perceptions of their own identities. In the absence of other ways to express that identity, we pizza-lovers sometimes put pizzas of yore on pedestals that we didn’t at the time we were eating them.

Sherman understands this, yet amid all that nostalgia, she found a medium open to creativity.

“It’s such a simple thing. You can do so much with it. It’s such a blank canvass,” she says.

Sherman loved writing because it afforded a similar opportunity. And she really was on track to be a journalist. After her first fateful trip to Italy, she finished a degree in journalism and interned in the food department at the San Francisco Chronicle. Of course, this was around the time of the Great Recession and a coincidental shift traditional print media was starting to make toward digital media, and so she found it tough to find a job, particularly one that appealed to her interest in writing.

“I love print. I didn’t really like the whole digital thing, which was probably a mistake on my part,” Sherman says, laughing in a way that indicates she knows it was not a mistake. “I still get the New York Times delivered. I like the paper. I still want to read it.”

If there’s a connection to be made between writing and pizza, it’s this: they’re both face-value pursuits that are better when made by people who care a lot and who have dedicated time to them.

And so what journalism couldn’t offer, pizza did. She enjoyed working for Gemignani because, “I was learning new things; he inspired me so much.” So much that she helped launch one of his company’s outposts in New York City and competed in pizza-making competitions.

We in Boulder are the beneficiaries of that transfer of knowledge. Sherman, who grew up in Boulder and whose family runs Moe’s Broadway Bagels, took some time to find a place to set up shop. Once she found a spot near Ideal Market, her brother took over the business side of operations, and Sherman took over the kitchen, culling from what she’d learned in her culinary career.

Sherman gives credit to Gemignani for the Pizza Garage’s remarkable dough. It’s built from a mother dough that’s continually fed, and the dough is aged for three days before it’s used. (That is, when pizza demand doesn’t require Sherman and Co. to dip into their un-aged stash.) The combination of natural yeast and a natural rise means the gluten in the dough has an opportunity to break down, which means, in theory, Sherman’s pizza shouldn’t sit like a brick in your stomach.

It also tastes good, which matters, and has a consistency very similar to New York-style slices, which also matters — a thin crisp with a little chew and a little sop. Sherman says she creates this by using an electric oven, which doesn’t cook it so fast it gets crispy, as it would in a wood-burning stove, nor too slow as in a gas-fired stove, where it can get thick and chewy.

The varieties Sherman creates atop the dough are all hers, and they give Audrey Jane’s Pizza Garage a bit of distinction: creative white pizzas, belly-busting Sicilians and a cadre of spicy red sauce pies. There’s a spot-on cheese blend that creates tasty orange grease characteristic of a New York-style slice, and Sherman balances that with a commitment to fresh vegetables and meat toppings.

That unique formula translated into national acclaim when Guy Fieri came calling and featured the Pizza Garage on Diners, Drive-Ins and Dives. Sherman says they’ve been swamped ever since. It was “a pleasant surprise” to be on the show, she says, particularly given her background in food media, but that it wasn’t what the shop would ultimately pin its reputation on.

“I watched it at home, and I was like, ‘That’s enough.’ Just one time. I wanted to make sure the food looked good, and the place looked nice,” she says. “I mean, sure, yeah, I’d like to have my own show on the Food Network. That sounds pretty good. But that’s not my ultimate goal. I love being here, and we have so many regulars and I love that interaction.”

Sherman is already looking for a second location in Boulder. Her sense that the city needed a place to stop in for a slice — as opposed to another thin-crust, artisan, Neapolitan shop, or a sit-down pizzeria — has been validated.

Oh, and another similarity between writing and pizza: you can pick up or set down either of them when you’re ready. Though the Pizza Garage is a hit, writing is in Sherman’s bones.

“I used to write more; now I’m too busy and I don’t. Ideally I always want to incorporate the two in my life. … I would love to do that,” Sherman says. “We haven’t quite gotten there yet.”

Until then, Sherman will tell stories not with pen and paper, but with dough, sauce and cheese.