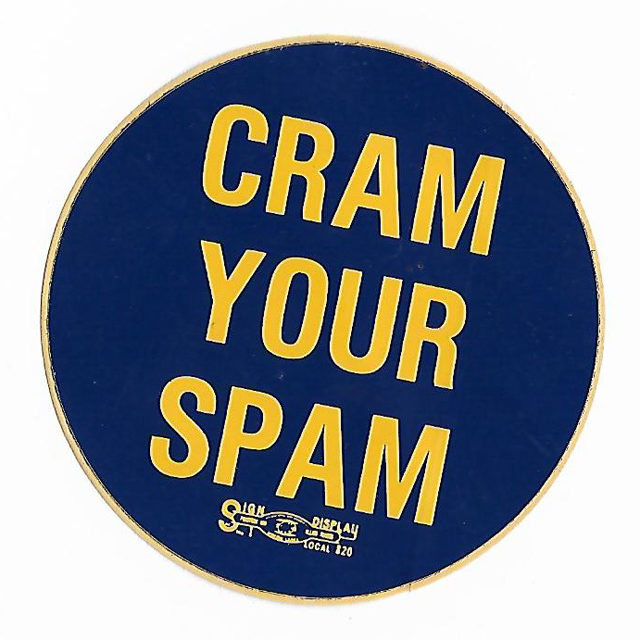 A lot of us live in Tofu Town and its surrounding communities. Boulder is the epicenter of the natural foods industry. National press journalists contact me yearly for predictions about food trends like avocado toast, natto and cricket flour because Boulder’s vibrant food scene and savvy consumers are legendary. Vegans thrive here.

And yet I see enormous displays of canned meats — SPAM, canned chicken, corned beef and more SPAM — in Boulder’s chain supermarkets, big box stores, convenience and drug stores, and even ethnic markets. I’ve wondered for decades: Who buys all that SPAM and what do they do with it?

I watch when I shop. I look in other people’s baskets. Maybe it’s my timing but I have never observed even one shopper buy (or even touch) a can of SPAM. I’ve never seen it in any Boulder home. It must be furtively purchased and then hidden from view. Is it the result of SPAM shaming? The only places you see it served in public are Hawaiian eateries as musubi: grilled SPAM and sticky rice wrapped in dried seaweed.

Inexorable demographic changes and increased nutritional awareness should have doomed the salty canned pork product to the back shelf of culinary history by now. “Spam” is a highly negative word in the digital age.

Instead, SPAM is celebrating its 80th birthday and is as popular as ever in the U.S. and around the world. More than 7 million cans are consumed each year in Hawaii alone and SPAM-themed eateries are open in the Philippines, where the canned meat is served in the morning with lots of garlic rice and eggs.

You can purchase a sampler online of 12 12-ounce cans of bacon, black pepper, cheese, chorizo, garlic, hickory smoked, hot and spicy, jalapeno, regular, teriyaki, tocino and turkey SPAM for about $70 plus shipping. Consider it for a tasting at your next neighborhood gathering. For a good time, don’t tell them what it is until afterwards.

You may not like the taste — especially that icky SPAM-gelatin atop each loaf.  You may be opposed on nutritional grounds. You may abhor Hormel and its business practices, but SPAM is simply pork shoulder, ham, salt, water, potato starch, sugar and sodium nitrite. It’s not snouts, skin or internal organs. Better to worry about such things as potted meat food product, tiny canned Vienna sausages, chicken nuggets and most of the hot dogs eaten in America.

People ask me what sort of fabulous diet I consumed as a child that led to my career as a food-trend watcher, cooking teacher, columnist, restaurant critic and food judge. Mom was a good home cook but there was always a can of SPAM in the pantry. It was there for Dad. Every once in a while on a weekend morning he would make what he called a breakfast mess, a frittata of fried SPAM, eggs, sliced canned potatoes and American cheese. For him it was deeply nostalgic.

Hormel introduced SPAM — short for “spiced ham” — in 1937 and supplied more than 15 million cans a week to feed U.S. soldiers during World War II including my father, a doctor who served in the South Pacific. That’s one reason why I never consign America’s SPAM eaters to the basket of dietary deplorables. Everyone has a secret food they are embarrassed to love. Besides, SPAM consumption may be a form of silent rebellion against all those beets and flax seeds.

In honor of the 80th anniversary, I once again tasted SPAM in the form of a SPAM Single. It’s a single slice so it’s not really a lot of SPAM. It’s still the same vaguely pork-y, ham-y and salty, rubbery stuff it always was. It will probably be 5 or 10 years until I feel the need to taste it again.

According to legend, “spam” acquired its bad e-mail connotation when scripts of the classic Monty Python sketch kept getting dumped into early chat rooms, including this song:

On Labor Day, I’ll be in my new hometown of Louisville lending my taste buds to judging the annual pie baking contest. Categories at the Louisville Fall Festival are apple, fruit or nut, and cream. Stop by, say hello and have a slice with a scoop.

It may sound shocking but you may be tired of pie. As local tree-fruit season peaks, change it up by making a peach or plum cobbler. It’s essentially a pie without a bottom crust that also goes by colorful aliases including slump, grunt and pandowdy. A peach crumble or crunch replaces the pie dough with a layer of sweet crumbs. A peach crisp is like a crumble except typically topped with a granola mix of oat, nuts and brown sugar.

Coming attractions on the dining scene this fall: Hosea Rosenberg of Blackbelly will open Santo, an eatery focused on the food of Taos, New Mexico, at 1265 Alpine Ave. The space next to Ideal market was home to Radda, Masa Grill and other eateries. … The former Sushi Tora space at 2014 10th St. will be filled by Chimera, a new Asian restaurant from Zoe Ma Ma owner Edwin Zoe. … OAK at fourteenth’s Bryan Dayton will open Corrida, a Basque and Mediterranean bistro, at 1023 Walnut St.

Forget about all the gross pumpkin spice products filling the shelves and get into artisan pumpkin seeds. You, like me, may have thought that all pumpkin seeds were pretty much the same, a vehicle for salt with a husk you needed to spit out. Then I tasted Farmer’s Porch Heirloom Pumpkin Seeds. The company sources organically grown Styrian pumpkin seeds that are amazingly creamy and nutty tasting. They are dry roasted in Boulder in three flavors. The turmeric lime, cacao cinnamon and ghost pepper varieties are nicely spiced but not overpowering, and certainly addictive. They are available at farmers markets, at Cured and Blackbelly in Boulder, and at Lafayette’s Isabelle Farm store. For more information, go to thefarmersporch.com.

“Love was in short supply,/ but pies were obedient to her/ command of their pastry, crisp/ holding the sweetness within.” — from “The Scent of Apple Cake” by Marge Piercy