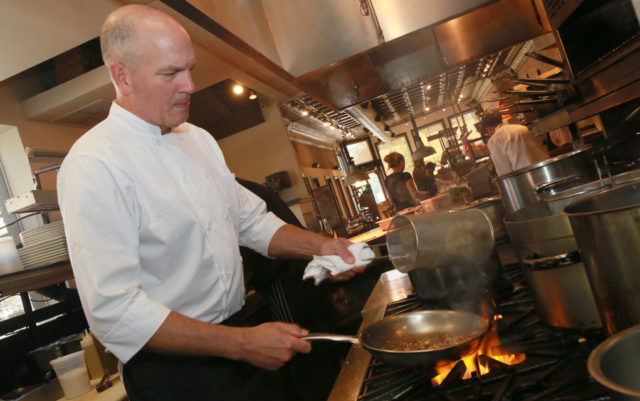 Every week in this space, I share just a little bit of the long and interesting conversations I have with Boulder County’s chefs, restaurateurs, farmers, brewers and other food professionals. And while what often makes it into the paper takes the shape of portraits — glimpses of personal histories that shed light on how that person got to wherever he or she is — our conversations often delve into bigger issues about the local food scene.

Looking back on the dozens of these discussions with the county’s top food minds over the last year, several common threads emerged. This is despite the fact that although they all share the unofficial title of Boulder County food producer, they come from all corners of the globe, with all types of personal backgrounds. But combined, their thoughts provide a de facto status report for Boulder County’s food scene.

Although not every trend or big idea is covered in this article, here are the three big things Boulder County’s food leaders are talking about now.

Numerous chefs had at least one example of a time in their careers when they had to work for a demanding chef. Now there were some folks, like Jed Breakell of Emmerson and Brett Zimmerman of Boulder Wine Merchant, who said that seeing the attention to detail in a kitchen expertly run by say, Thomas Keller or Charlie Trotter, was enough to motivate them to set their goals higher in the culinary world.

But Boulder County is also at the forefront of a changing chef culture, where a sense of community is being put on a higher pedestal than authoritarianism. Daniel Asher (River and Woods, Acreage) said that sense of community extends outside the kitchen, to the producers who supply the food to his restaurants, and to the diners consuming it.

“It sounds hilarious but the beauty of it is there’s so many things to share in a plate of food and all those people should share in the joy of what that final dish is about,” Asher said. “There’s no ego in it. I think that’s slowly being removed from kitchens as well, which is great. People are using more words like ‘we’ and ‘us’ and less, ‘I am the chef, this is my thing.’ It’s becoming more collaborative. People want to be more engaged … and it’s not fun to just have one person telling the tale.”

Though Asher said the end product will be better as chef culture changes, Frasca’s Bobby Stuckey told me it’s an imperative if the lives of the people who make up the service industry are to improve.

“Historically, people didn’t take care of themselves. I try to lead by example. Like Anthony Bourdain, they wanted to glamorize the bad boy chef 20 years ago, stay out late drinking and … that’s not really sustainable, but it read really well,” Stuckey said. “But it was really damaging. I think the industry is tough but we make it uber, uber tough because people don’t take care of themselves.”

A toxic kitchen also prevents people from entering the industry, or from getting experience that would help advance their culinary skills. Christiana Scott, a personal chef, said she decided to work outside of kitchens because of her brief, negative experience in them. She said that even though diners talk about the sustainability of the food they’re eating, they don’t see how sustainability plays into keeping a kitchen staff healthy.

“It’s not something I hear brought up a lot,” Scott said. “You hear, ‘Is this restaurant organic,’ or, ‘Where are they getting their ingredients,’ but not a whole lot about the people behind the curtain, so it’ll be interesting if that starts to change; it’s just kind of the status quo.”

2. Walking the talk with
sustainability

Speaking of sustainability, it’s hard to get through a conversation with a Boulder County food producer without talking about it. On one hand, diners demand it, but on the other, there are plenty of gaps in the local food system which are often in the blind spots of those same scrupulous diners.

Chef Bradford Heap (Salt, Colterra, Wild Standard) has put several plant-based options on his menus, and aggressively pursues ways to educate the people who walk through the doors of his restaurants.

“The only way forward is plant-based. It’s got to sequester the carbon. It’s got to be organic, not because the hippies love it, but because the natural system that I honor, that I’m not smarter than, that I revere, is fucking amazing,” Heap said. “Everything. The way mushrooms come up and the roots, the symbiotic nature of it. Everything is in this giant symbiosis, and then we get in there with our chemicals and our shit, and we just totally screw it up.”

Of course there are several biodynamic and regenerative farmers in the county doing work that honors the natural process of growing food. Mark Guttridge at Ollin Farms is a leader in the field, but like others — including the folks at Aspen Moon Farm — he had to supplement the farm with another job for years. In Boulder County, there’s a lot of cost that goes into producing the food Heap said we need to be eating.

“It’s just an incredible amount of labor,” Guttridge said. “High cost of living. High infrastructure costs, and even though we have that captive audience here with the farmers markets, It’s just margins are really narrow. We’re up against a global food system that’s really pushed cheap, low-value food.”

Guttridge said the investment in local, responsibly grown food goes farther, too, in that it supports the people who work on that farm — his crew is up from “eight, nine bucks an hour … to $12 or $13.”

3. Food is struggling to keep up with County’s wealth

There are two bits of bad news for what has seemed like an unstoppable food scene over the past few years: One, the continued pricing-out of local shops in the City of Boulder, and a recent report from the Brewers Association that said the craft beer industry may be plateauing. With a couple good breweries biting the dust, one has to wonder if we’re on the precipice of an exodus of the food establishments that have helped put us on the map.

“I think it’s already starting,” he said. “This is a tough one because the kinds of groups that can really afford [rent on Pearl] are national groups, chains. And I am a bit fearful that Boulder could lose a lot of its identity to that, which is kind of a bummer. But the real estate has gotten… it’s outrageous. … It’s not sustainable for rents to be going the way they are going right now; to keep the kind of restaurant culture, the kind of working culture that we want here.”

One work-around is the food truck. Despite its national emergence a decade or so ago, Boulder County has been slow to embrace it. The addition of the Rayback Collective has been a huge boon, and Roy Brown of Passport said his truck’s stints at the establishment are the most lucrative. But finding room elsewhere can be a challenge.

“The City itself is still a little averse to it,” Brown said. “There are not many spots; aside from breweries or Rayback, there are not many places. You can’t pull up on the side of the road and start selling food in Boulder. Breweries are pretty easy, but unfortunately how much you sell is a question.”

But it’s not all doom and gloom. With the increase in wealth, more opportunities present themselves. Will Frischkorn told me his wine and cheese shop, Cured, is a prime example of an establishment benefiting from the boom.

“We have access in Colorado to pretty remarkable wine now,” he said. “Ten years ago, it was just starting. We get winemakers from California who hop in and say, ‘How do you have that here?’ And it’s $15 cheaper, and they clean us out. And it wasn’t that way not too long ago.”

Too, the opening of a bacon-focused restaurant in Lafayette (William Oliver’s) and a snack house in Longmont (TREAT), expanded farmers markets in those cities, and migration from priced-out Boulderites into East County, indicates that although the geography of the food scene may be in flux, the future of it is likely to remain curious and bright.