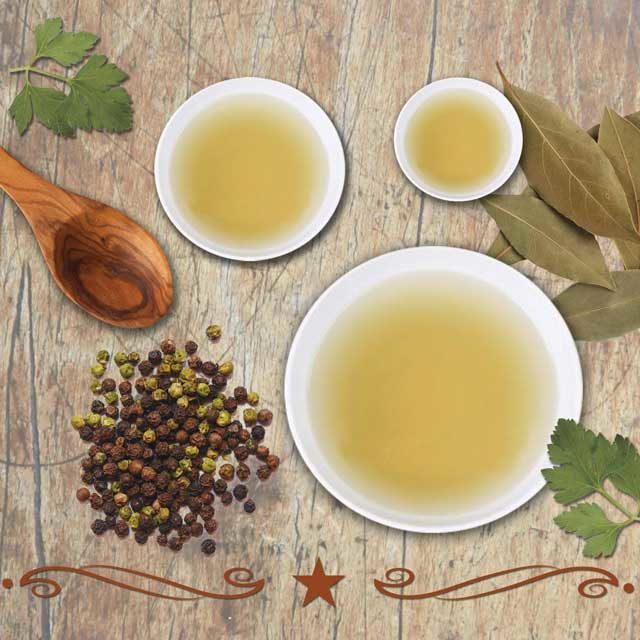 There is a giant bag of ice cubes in my freezer. It makes me very happy.

I don’t put these frigid gems in ice water, iced tea or mingle them with fine single-malt Scotch over rocks, because it would be weird.

This is a two-gallon, zippered bag crammed full of gorgeous, yellowish units of frozen turkey stock I made after Thanksgiving. It was free, made from something many people toss away.

Learning how to make stock and broth is the one essential kitchen skill I wish every home cook acquired because you get to cook tastier food, save a lot of money and eat a whole lot healthier. Trendy bone broths are at the heart of Jewish chicken soup, Japanese ramen, Vietnamese pho, French onion soup and many of the world’s tastiest dishes.

“Stock” is a sibling of “broth” but you’ll hear them used interchangeably. Stock — whether beef, chicken or pork — is made with various bony leftover animal parts. Broth tends to be much lighter and made mostly from meat with a lighter color and a less rich texture. Vegetable stock is a separate and valuable liquid. I love subtly cheesy Parmesan broth, made by simmering the hard rinds surrounding genuine Parmesan, when making rice.

Bouillon cubes are a lousy substitute, as is most canned broth.

You can look up the many health benefits of stocks and broths, easy-to-digest sources of amino acids and minerals that can protect your joints.

It matters which bones you use

People get their bone broth prescriptions filled at Boulder’s Blackbelly Market. Local medical professionals are known to advise them to drink bone broth for the sake of their aching joints and general health. “We sell a lot of it hot by the cup and the quart. We also make a no-bone collagen broth using tendons that is very popular with athletes,” says Nate Singer, head butcher at Boulder’s Blackbelly Market.

In the process of butchering whole animals to supply the market and Hosea Rosenberg’s Blackbelly restaurant, Singer ends up with a lot of bone, cartilage and other parts that he turns into broth.

“First, you roast the bones. It’s the start of a four- or five-day process. You add veggies and simmer it for 48 hours. It’s filtered, then we let it settle and it congeals,” Singer says.

To make a great broth you need different parts of the animal, according to Singer. “We use the hooves, which have a lot of gelatin, also knuckles and ribs. Every bone adds different attributes to the broth,” he says.

Singer also produces aspic from hogs’ feet and shanks. Call it savory Jell-O). “We use the aspic in sausage and meatballs and it adds a lot of flavor,” Singer says.

How to invest in stocks

A good stock starts with adopting a strict zero-waste policy. For meat stocks, use bones, including the carcass of that rotisserie chicken you picked up at the supermarket. You use the cheapest possible cuts of any meat to make stock. Fish and seafood broth uses shells and bones.

Put bones, chewy stew meat, scraps, fat trimmings as well as carrots and onions in a pan big enough that there’s room around the pieces. Roast them at 375 degrees for 45 minutes to an hour until browned. Take them out and put them in a deep stock pot with celery, carrot and water (or use vegetable broth instead of water).

Meanwhile, put the roasting pan on the stove and add veggie stock or water and slowly dissolve the brown, caramelized bits and pour that into the stock pot.

Do not add salt. If you simmer and reduce the broth it may get too salty.

Simmer for three to six (or more) hours. When cool, strain. Use a coffee filter if you want a clearer stock. Cool. If not being used soon, freeze the extras, preferably in an ice cube tray.

Skip the bell peppers… and the greens

For vegetable stock, you want those vegetable odds and ends: wilted, chewy green parts, the peeling and trimmed pieces, celery bottoms, onions skins, and mushroom stems. You save this ugly stuff until you have enough to make veggie or other stocks. Certain vegetables are preferred for their neutrality, especially the holy trinity mirepoix of carrots, celery and onions. Also: mushrooms, leeks and an occasional tomato top.

Bring the vegetables to a boil in a big pot with plenty of water and then reduce to a simmer over very low heat and cook for about 60 minutes. Cool and strain.

Equally important is what you do not use. Don’t add garlic, summer or winter squash, bell pepper or chilies, most herbs and other strong spices. Greens and green beans get bitter and potatoes cloud the stock.

That said, I sometimes save that water from boiling potatoes to use in making stews and soups that need some creaminess. Zero-waste policy rules.

“It’s not like in the 1960s when whole grain was like eating a hockey puck. Do we really need more white bread in our schools?” —Ann Cooper, food service director for Boulder Valley Schools, quoted in the New York Times, on the Trump administration’s rollback of school lunch nutritional upgrades.