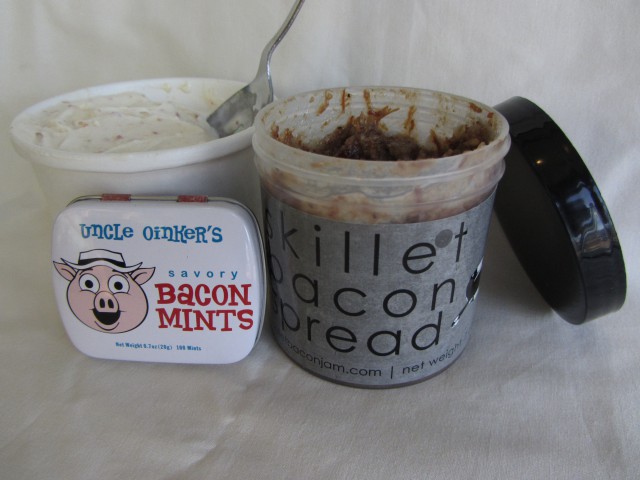 Bacon is one of those things that people say makes everything better. Wrap it around scallops or a filet or toss some on a sandwich and you have a very popular menu item. One local bartender even said bacon is the reason he stopped being a vegetarian. However, it is possible that the bacon craze has gone too far.

A study of locally sold bacon products and a week of tasting has the Boulder Weekly staff questioning some uses of bacon and likely eating salads for the next month.

This oddity is made by Ice Cream Alchemy, a local wholesale ice cream company owned by Peter Arendsen and his wife, Lori Winslow. Though the ice cream is not sold to the general public, restaurants in the Boulder/Denver area often offer some of the more common flavors, like the Cocoa Nibs ice cream at SALT. The bacon ice creams have made appearances at Lola, Solera and Jax in Denver and are mostly used for special dinners instead of the daily menu, Arendsen says.

According to Arendsen, many of his ice creams may seem weird on their own, but they add a unique twist to common desserts like flourless chocolate cake or apple pie. At Boulder Weekly, we experienced four bacon ice creams: plain bacon, maple bacon, bacon pis tachio and bittersweet chocolate bacon. Though we didn’t have a dessert item to pair with the ice creams, we were pleasantly surprised.

The saltiness of the bacon had an intriguing effect on the sweet ice creams, and the bacon bits were small enough to add texture variance without being chewy. A spoonful of each ice cream was the most anyone could really handle. Each of the flavors was distinct and we could imagine enjoying a scoop on top of a piece of cake or pie. So, even though they sound strange, we say if you have the chance to try a bacon ice cream from Ice Cream Alchemy, be brave and go for it.

This one may have been the strangest item we tasted. Found at Cured, the gelatinous and stringy-looking mess comes in a small tub and is suggested for use on cheese, sandwiches or just a spoon.

“The bacon jam is without a doubt one of the cooler bacon products out there,” says Will Frischkorn, co owner of Cured. “At Cured, we have slab bacon, cut to order, but this stuff is ready to rock with nothing but a spoon. A crusty piece of toast, a healthy schmear of the Skillet Bacon Spread, and a slightly runny, sunny-side-up egg, and any day is off to a good start.”

Though the texture of the spread is a little frightening at first, and the smell is a bit overpowering, this stuff doesn’t taste half bad. One staff member said it makes you want to strip down to your underwear and watch NASCAR. Luckily, that didn’t actually happen, but you get the point. Though we aren’t so sure about eating bacon jam with just a spoon, we agree it would be good on a bagel or sandwich in place of the typical condiments.

The drink masters at SALT decided to infuse bourbon with bacon for a bloody mary to be served during Sunday brunches. Surprisingly, the bourbon isn’t overly cloudy and doesn’t have too many fat particles floating around in it, but best not to think about the latter point.

Assistant Bar Manager Ryan Arndt obligingly let us try the bourbon both on the rocks and in the housemade bloody mary mix, and included bacon garnishes with both drinks.

Drinking the bacon bourbon straight wasn’t the best idea. It was kind of exciting the first few sips, because the bacon infusion gave the bourbon extra smokiness, but the thrill passed quickly and it became difficult to get through. In the bloody mary, on the other hand, the bacon bourbon was a nice touch and added a very light hint of smoky bacon on the tail end of the otherwise spicy and tangy cocktail.

So if you are at SALT for brunch, try the bacon bourbon bloody mary. Just do not order the stuff straight.

Created by Eric Guthrie, owner of Dizzy Donuts, and sold either through home delivery or Vic’s Espresso on Table Mesa and in Longmont, the bacon maple donut seemed as though it would be pretty straightforward and a general crowd-pleaser.

Well, for starters, one of the these may be impossible for a person to get through alone in one sitting. We definitely suggest splitting among friends. Yes, note the plural. Not you and one other person. Multiple friends.

Another issue is that the donut tastes overpoweringly of maple with just a hint of bacon. One Boulder Weekly staff member said it was similar to a McGriddle at McDonald’s. Another aptly phrased it a, “a triple bypass on a pastry.” Either way, the maple smell will permeate whatever room you are eating in and will not go away until you remove all traces of the pastry. Also, you will need a very long nap to recover after eating.

Yes, the donut is good for one or two bites, and if you have a sufficient source of caffeine available it won’t affect your day too much, but this is definitely pushing the boundaries on when to use bacon.

Made by Vosges Haut-chocolat and sold at the Boulder Bookstore, this thing is scary. It is literally a chocolate bar with bits of bacon inside. The staff at the store say the bar is popular and that they enjoyed small pieces of it, but one man did warn of potential chewiness.

The Boulder Weekly staff reaction was mixed. It tastes like a salty crunch bar with a hint of bacon, and though it has some chew to it, with prior warning it wasn’t unpleasant. Also, the men in the office seemed to enjoy it more than the women. So, if you are feeling brave, go for it, but we are hesitant to give something this strange a glowing recommendation.

These are sold at Where the Buffalo Roam and come in a novelty tin with bacon images on the bottom and a fat pig face on the top. Tim McCormack, a staff member, says they are very popular gag gifts. That is the extent of the good in these things.

They taste vaguely like bacon at first and then slowly transition to an odd mint taste toward the end. We see no point in seriously consuming these and can only say they would make good stocking stuffers. This is certainly the biggest breach of normality of all the bacon products we tried and we have only one question — why?