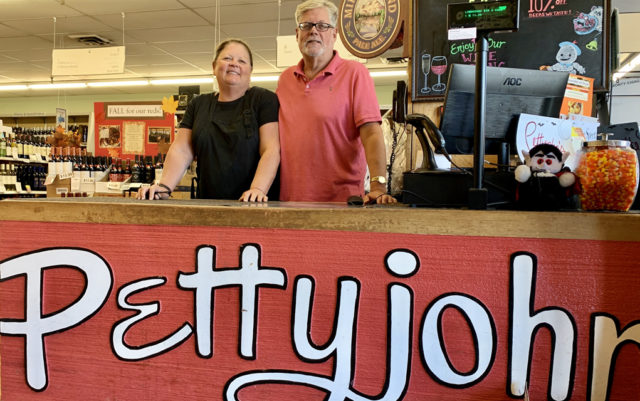 Chris Coppinger was on his way out to California in 1977 after graduating from the University of Maryland. If you ask him, he says he fell in love with Boulder and decided to stay.

If you ask his wife, Ann, she’ll say, “My husband ran out of money.”

So Chris bagged groceries at the King Soopers on Table Mesa, and, having always wanted to work in a liquor store, walked down the hill to Pettyjohn’s Liquors after work every day and asked the owner, John Pettyjohn, if he would hire him.

“He harassed John Pettyjohn to hire him,” Ann recalls, then pauses and laughs. “And finally John did.”

Chris called Ann, who was a semester behind at the University of Maryland, and asked, “What are you doing after you graduate?”

Ann had a business degree, so when she got to Boulder, Pettyjohn hired her to do the books, and she and Chris closed the store every night. Though Ann had no thought she’d ever work in a liquor store, Pettyjohn made her the wine buyer because of her business skills. The wine section back then was maybe one rack, but Ann took wine classes so she could at least stock that rack well. She found she a had a natural ability.

Nonetheless, Ann (and Chris) got a heap of wine and spirit certifications, and as their knowledge grew, so did Pettyjohn’s. John Pettyjohn got the City of Boulder’s first retail liquor license in 1969 (though Liquor Mart was the first to open). Pettyjohn was manager of the parts department at a Dodge dealership in Littleton when his son told him Boulder, which was dry until then, was about to lift its liquor regulations. Pettyjohn jumped in, drove from Littleton every day to a lonely neighborhood of rental and track homes (King Soopers wasn’t built yet), and worked in his pocket liquor store. He hired his wife, Marie, then Ann and Chris, then expanded the building over the years.

But the most remarkable thing was the relationship Ann and Chris built with the Pettyjohns. It was just one of those happy cosmic coincidences.

“The Pettyjohns had four children, all of them older than us,” Ann says. “And my husband had lost his father during college, and I had lost my mother in college. The Pettyjohns pretty much adopted us.”

“When the liquor license was switching over to me, John and Marie were at the liquor hearing and the liquor board said something about how wonderful it was that the family was continuing the second liquor license,” Ann says, then recalls, shaking her head, “[John] got up and screamed, ‘No, I was the first,’ and I’m like, ‘Sit down!’”

Indeed, Ann says their intimate relationship with the Pettyjohns worked like any other family. They had each other’s backs, but they could get on each other’s nerves. John and Marie had a tendency to pop in to the store unannounced after retiring.

When John and Marie declined in health, before passing away, Ann and Chris often accompanied them to the emergency room and notified the rest of the family when things looked bad.

And it all started because Chris ran out of money on his way elsewhere.

Pettyjohn’s will celebrate its 50th anniversary next month with beverage and food tastings, winemaker visits, a special Breckenridge Bourbon tapping and more. On Dec. 7, all of the Pettyjohns from around the country are flying in for a family reunion of sorts, shared with the community that has supported the store over the last five decades.

That South Boulder community, Ann says, is unique, and it’s changed over the years, much like the rest of Boulder County. The items in Pettyjohn’s tell the story: it used to be a pocket shop for mass-produced beer and niche wine; now it’s primarily a wine shop (with plenty of craft beer and liquor) that Ann curates and sources, in large part, directly from winemakers. And as the neighborhood has gotten pricier, so has the concentration of wine enthusiasts.

“I’d say the majority of Table Mesa has been to Italy,” Ann says, laughing again. “The houses are selling for millions of dollars, and they’re scrape-offs. And so instead of having a rental community of mostly students, I’ve got some serious money and some very knowledgeable customers, so we had to evolve with them.”

That evolution also helped stave off the effects of Colorado’s decision to allow full-strength beer to be sold outside of liquor stores. Ann says she’s lost about 25 percent of her beer sales since the change, but the focus on wine and craft food items like chocolate and olive oil have mitigated the loss. And as one of the 160 independent liquor store owners who helped negotiate what the legislation might look like, Ann says carving out protections in the law “saved our lives.” For example, one, generally speaking, requires grocery chains within 1,500 feet of independent store owners to buy that store’s liquor license if it wants to sell wine and liquor in that area — assuming the independent store owner wants to sell.

“For 40 years, every year it was like, ‘Oh my god, are they going to put it on the ballot?’ It was just a constant thing,” Ann says. “And our legislators, who were standing behind our small businesses, were getting tired of it. We knew that we needed to come to the table and negotiate.”

So a lot has changed in the 43 years Ann and Chris have worked at Pettyjohn’s — in the liquor business, in Boulder and in the shop itself. You can still see the old, wooden Pettyjohn’s sign on the front of a checkout booth; a picture of a young Ann and Chris hangs by the doorway; exposed beams indicating past expansion projects. The store, like the wine inside it, has aged well.