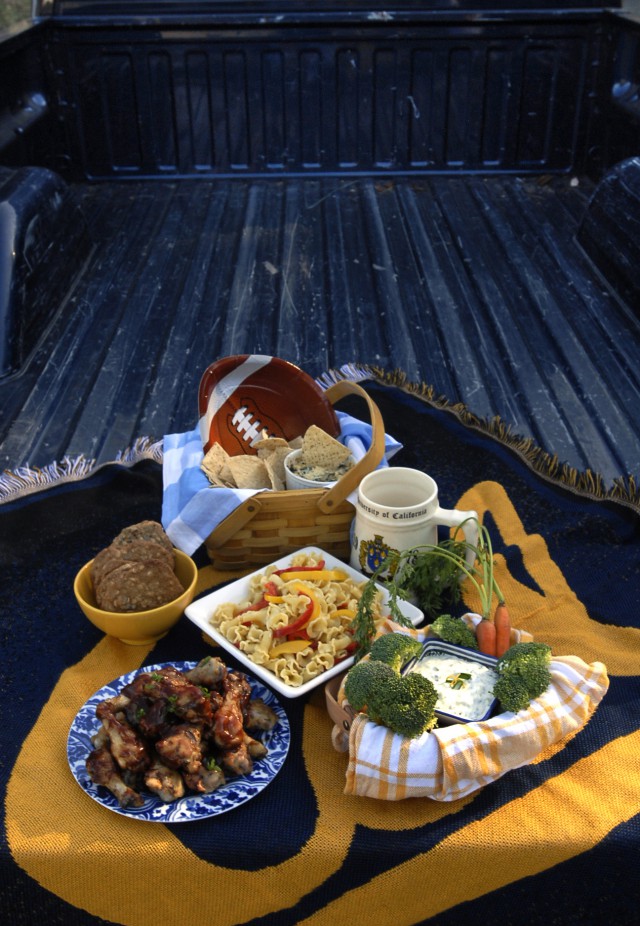 Football season is upon us, and whether you’re cheering for the home team, or are on the visitor’s side, sustenance is essential. More than 35 million Americans think so, anyway. That’s the number of football fans who fire up their grills in stadium parking lots from coast to coast — according to the American Tailgaters Association — and mix their gridiron enthusiasm with a hankering for friendly, casual cuisine.

The trick to successful tailgating — the kind that’s fun for guests and cooks alike — is doing most of the work ahead of time, says Guy Fieri, the spiky-haired host of Food Network’s “Diners, Driveins and Dives.”

The Santa Rosa, Calif., chef and his film crew were spotted on the Oakland Raiders’ sidelines recently, enjoying some football action and filming scenes for his next tailgate show, which will air Feb. 10. Fieri is, after all, something of a tailgate expert, and last year’s pregame episode is still a popular download on the Food Network’s website.

Dips, chips and grilled foods may be traditional fare, Fieri says, but there’s no need to settle for rehydrated onion dip and boring burgers. Transform a classic artichoke-spinach dip with a dollop of pesto. Go wild with wings. And above all, start the cooking at home.

A third of the nation’s tailgaters follow the latter advice. They precook their chicken, form their burger patties or smoke the ribs, then finish them in the parking lot. Salads? Torn and ready for tossing.

The rest of the tailgaters somehow manage to chop, whisk, sauté and garnish in a parking lot. Either that, or they’re relying heavily on wieners.

They join the large-scale tailgate parties organized by their local alumni associations. For example, Oski, the University of California at Berkeley’s mascot, cavorts among the tailgating fans on Berkeley’s Underhill Field. And Stanford alums enjoy their repast under the white umbrellas dotting the fields near the campus stadium.

Some enterprising tailgaters go a different route. Die-hard San Francisco 49ers fan Marian Briones sets up an entire camp kitchen — everything including the sink — in the Candlestick parking lot.

“I’m really good at it,” the Fremont, Calif., resident says. “I’ve got my 30,000 BTU stove. I do all kinds of stuff — chicken skewers, ribs, a deep-fried turkey the game before Thanksgiving. I’ve even baked cornbread on the grill. Oh yeah, I’m serious.”

The self-styled “Martha Stewart biker chick” makes her own meat rubs and apple-laced barbecue sauce, and a wide array of side dishes and appetizers — bacon-wrapped jalapeño poppers are a favorite.

“This one dish I always make is garlic pepper noodles with sautéed bell peppers,” she says. “It’s delicious — great cold or hot. It looks very pretty on the plate, and goes with barbecued chicken.”

And foodie football fans fill the Oakland Coliseum’s parking lot hours before every game. Drive by, says avid tailgater Denise Barsamian, a Moraga, Calif., resident, and you’ll think the Coliseum has caught on fire. Smoke billows into the air from hundreds of grills, and the aromas of baby back ribs, mari nated chicken breasts and well-seasoned tri-tips mingle in the charcoal-tinged breeze. Some people go all out, bringing in elaborate table setups and backyard grills they’ve chained to their pickups.

“You cannot believe the ingenuity of some people,” she says. “We’ve seen people bring a couch and a couple of recliners, and a satellite dish on top of their cars to watch earlier games.”

By those standards, the Barsamian clan is relatively restrained. They only have two shelves in their garage set aside for their tailgate accoutrements, the Raiders tableware and place mats, the skull-themed salad set, and hibachi-sized gas grill.

But having all the basics on hand means they can concentrate on the food.

“We mostly stick with your basic all- American things, lots of tri-tip, ribs, hamburgers — and fajitas,” says Barsamian.

The trick, she says, is planning, delegating — divide salad and dessert responsibilities among your guests — and packing lots and lots of paper towels. And when the weather turns chilly, opt for baked potatoes. They’re a do-ahead side dish that tastes great, she says, but there’s an even more important reason: “You can hold them in the parking lot.”

1 bag rotelle, campanelle or other pasta

Saute
garlic for about 30 seconds, add bell peppers and saute for 2 to 3
minutes more. Add broth and wine and bring to a boil. Lower heat and
simmer for 20 to 30 minutes, until mixture

cooks down to a quarter of its original liquid volume.

3. Toss with pasta and serve hot or cold.