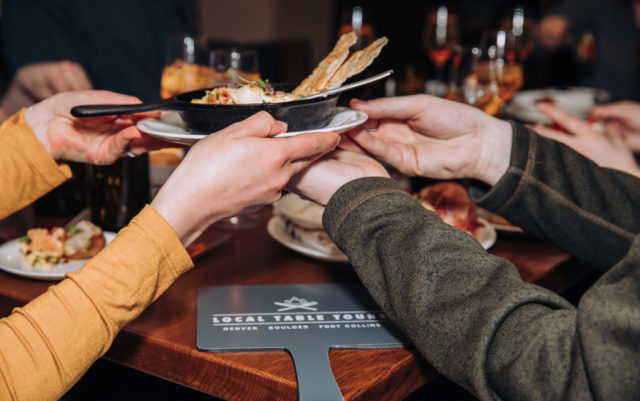 The friends, the family and the friends of family are dropping by for a visit. After moving to Boulder I noticed a phenomenon: If you relocate here, they will come.

Everybody I knew — or was related to — eventually decided it was time to visit. I’ve been here long enough that many family and friends have come to town on a regular basis. There is a problem. They’ve seen everything, especially when it comes to food and drink.

Visitors have been to the usual suspects. They’ve gone on the Celestial Seasonings, Hammond’s Candies and Coors tours, and seen the sights at Casa Bonita and the Boulder Dushanbe Teahouse. After Western dining at the Gold Hill Inn, they had Rocky Mountain “oysters” at The Fort. My visitors have donned a parka for cheese shopping at the Cheese Importers Warehouse and gotten to know the Boulder Farmers Market. They’ve hit eateries featured on Diners, Drive-Ins and Dives and visited many beer and cider tasting rooms. They wonder: Is that all there is?

As Colorado’s unofficial culinary concierge, I take it as a challenge to seek out new food destinations, so I consulted an expert.

Megan Bucholz has had a front row seat on visiting foodies’ tastes for nine years as the owner and chief guide for Local Table Tours. Focusing on walking tours with various food and drink stops, the company has grown from one tour in Boulder to a menu of tasting options in Boulder, Denver and Fort Collins. One of her downtown Boulder tours includes locally brewed beer, mead and Colorado-distilled spirits with small plates at notable eateries.

“It was very different when I started the tours. There was much less to do. Now Denver is known as foodie city. People are coming here to eat, especially after Top Chef, and they have high expectations,” Bucholz says. Folks arrive with a priority dining list that typically features Frasca Food and Wine.

Bucholz is drawn to destinations with multiple taste attractions like downtown Boulder. “I’d rather visit a neighborhood than drive from place to place. That’s why I like Old Town Fort Collins,” Bucholz says. She points to the Copper Muse Distillery, the Welsh Rabbit (a cheese-oriented bistro/shop), Nuance Chocolate (bean-to-bar chocolatier) and the cool restaurant-bakery Ginger and Baker — all within blocks of each other.

Bucholz has some other suggestions for those expecting company.

If you want to try some of Boulder’s best eateries but shriek at the high dollar figure, she recommends a weekday happy hour trek that includes Oak, Via Perla, Corrida and The Med. Other notable late afternoon deals can be had at Pizzeria Locale, Blackbelly and Mateo.

Boulder County is just this side of organic heaven for diet-focused diners. Bucholz says she sends folks to Wonder and Shine Restaurant & Potion Bar in Boulder. Other healthy Boulder County stops could include Fresh Thymes, Thrive, A Cup of Peace and the Organic Sandwich Co.

Curry and the Sistine Chapel: Since Boulder has yet to open a food hall, you’ll have to take the family on a road trip. The newest is Golden’s new Tributary Food Hall & Drinkery, featuring Biju’s Little Curry Shop, Mr. Miner Meat & Cheese (from Il Porcellino salumi) and Working Title Kitchen from Daniel Asher of River and Woods. At the Stanley Marketplace in Aurora, get up close and personal with the Sistine Chapel ceiling frescoes. Huge photos of Michelangelo’s Renaissance masterpiece fill walls and you can walk through the food hall to eat at Annette, Comida and Rosenberg’s Bagels.

Depending on the visitors’ politics — or in spite of them — I’d take them to the new Mango House on East Colfax in Aurora. This home for refugees from all over the globe features stalls serving Syrian, Sudanese and Somali food and the only Burmese fare around. I’d happily take anyone for weekday lunch at Denver’s Comal Heritage Food Incubator showcasing authentic fare prepared by women from Mexico, El Salvador, Syria, Iraq and Ethiopia gaining food business skills.

Odd Tasting Rooms: There seems to be a tasting room on every corner but there are a few new ones that step outside the usual beer, spirits and mead. The state’s only rice wine maker, Denver’s Colorado Sake Co., offers flights of infused sakes. In Arvada you can sip at Colorado’s first hard seltzery, Elevated. Boulder’s first cidery, BOCO Cider, is open in North Boulder’s tasting room row off Lee Hill Drive, pouring unpasteurized, unfiltered and infused varieties. HopTea — craft-brewed tea hopped like beer — opens its Boulder tasting room on weekends. In Colorado Springs, the nation’s only lemonade taproom, Pikes Peak Lemonade Co., uses only organic lemons (or limes), organic cane sugar and filtered water. It’s served with infused syrups in mason jars filled from the tap. If they haven’t tried kava yet, relax your guests at Boulder’s The Root Kava Co.

Whoopie-Tie-One-On: You can’t really say you’ve gone Western until you’ve saddled up for the thoroughly kitschy Original Chuckwagon Dinner & Western Show in Estes Park. You belly up for brisket, pulled pork, cowboy beans, biscuit, potato, half a peach and beverages plus a full bar. Sit outside awhile for a very family-friendly show featuring comedy, Western music, yodeling and storytelling. It’s at the historic Elkhorn Lodge, a grand old 1847 lodging spot filled with lots of antiques and ghosts.

“It’s a rule of mine to eat local wherever I am and whatever it means ingesting — whether that’s ants in Brazil or tripe in Mexico or stinky tofu in China. Sometimes I discover something I held an irrational prejudice against and it turns out to be delicious. Sometimes it isn’t.” — Michael Pollan