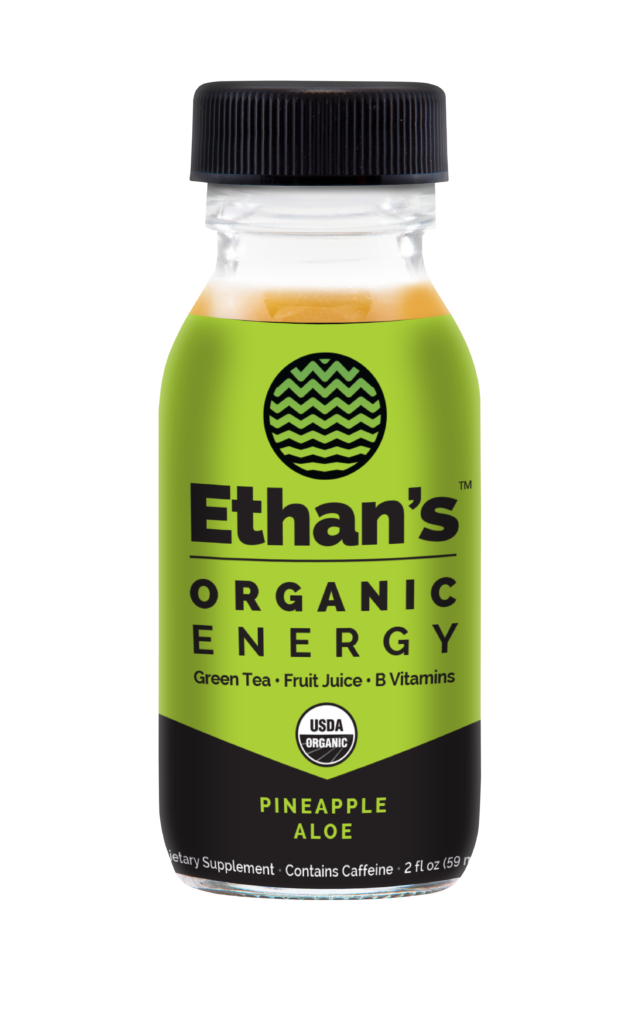 If you’ve sucked down an energy shot, it was likely a 5-Hour Energy, it was likely 2 a.m., you were likely at a truck stop off an interstate, you may have been behind the wheel of a UHaul and you very likely held your nose and muttered under your breath, “Why am I doing this?” And, you probably crashed before five hours were up. Not the car, hopefully.

After that, you likely never tried one again.

Ethan Hirshberg knows this, which is why he created an organic, all-natural energy shot that actually works. It’s the latest in a line of shots, under the Ethan’s label, that inject real ingredients into a much-maligned beverage. There’s Ethan’s MCT shots, apple cider vinegar shots, and now energy shots with green tea and guayusa, a tree native to the Amazon that’s long been brewed for its stimulative effects but has largely been ignored by the U.S. mainstream energy drink market.

“The thing about guayusa for whatever reason is the lift is so different,” Hirshberg says. “The main thing people tend to complain about with traditional energy shots besides the taste is just that it’s huge spike and a massive crash. Guayusa is really the best way I’ve found to eliminate that in a natural way.”

There is a different buzz one experiences after drinking guayusa, though surely the effects will be different for different people. Generally, though, it induces a less jittery energy rush than Red Bull or 5-Hour Energy, and it’s stimulative effects come on subtly and ebb just as gently. It’s like the difference between drinking a triple shot of espresso versus a butter coffee, which has a prolonged, slow release of caffeine into the bloodstream.

Figuring out just how much guayusa and green tea to put into the shot to make it taste good, retain its relative health benefits and, most importantly, provide a boost of energy was a years-long process. Hirshberg says he tried “every energy shot ever created,” which “wasn’t a fun couple months.” Using responsibly sourced, organic ingredients while still providing an energy boost was a process of research, trial and error.

“We played with a million different ratios,” he says. “We also tried yerba mate … but we actually didn’t like the effect yerba mate was having with significant dosages. We found what we think is the optimal combination of green tea and guayusa so you don’t end up crashing down in the end.”

Luckily for Hirshberg, he lives in the mecca of natural food brands. He moved to Boulder after growing up on the East Coast, moving out to California to work his first job in natural foods — at Harmless Harvest, which makes coconut water — and a stint in Southeast Asia exploring the factories where many energy drink companies either source their ingredients  or produce them.

In Boulder County, he found a robust group of natural foods pioneers willing, and even eager, to help him grow his business.

“You have this wide range of knowledge and experience in this community and then it’s all tied together by definitely the sense of a common mission. …

“People have been super generous with their time, getting coffee or making introductions or you name it. And over the last year I’ve been able to pass that along to some earlier stage companies.”

Those connections have helped him conquer obstacles inherent in producing an all-natural food product. Because Ethan’s uses real food, its subject to the seasonality of food growing, natural disasters, social disturbances and more.

“We had a random unforeseen spike in the cost of blueberry juice and one of the energy shots is pomegranate blueberry,” Hirshberg says, giving credit to the biggest name in guayusa energy drinks, RUNA, which, by virtue of its early success, “made it easier to get a hold of organic guayusa.”

In just a few years, Hirshberg has grown Ethan’s into a regional brand (the Mountain West) with a handful of full-time employees and a much larger group of part-time employees and consultants. He says his past experience in the natural foods space has helped him learn “what not to do” when launching new products and growing a company, which has led him to craft a company in his unique image.

“In terms of personnel I’ve opted less for experience and more for passion and drive. That’s manifested with a pretty young team. I wouldn’t hesitate to say we make a lot of mistakes,” he says.

He produces the energy shots in the U.S., and doesn’t use plastic in his packaging. And he’s done it in a space — energy shots — that seemed saturated, or at least, seemingly, in low demand.

“I’ve been told on more than a few occasions just to stay away from [producing] energy shots,” Hirshberg says. “Whether it’s because 5-Hour will buy your shelf space or it’s been tried before. Ultimately, after all this time spent on it, we felt like we created a product that was better than any other out there. As I’m showing it to retailers that’s been the case.”

What’s next for Ethan’s? Hirshberg says, “anything I see that looks remotely interesting I order and try it,” to see what effects other natural ingredients might have and what can be incorporated into his line of shots.

Given that energy shots were such a blind spot for natural foods producers before Ethan’s launched its line, the next item the brand comes out with is just as likely to upturn expectations.