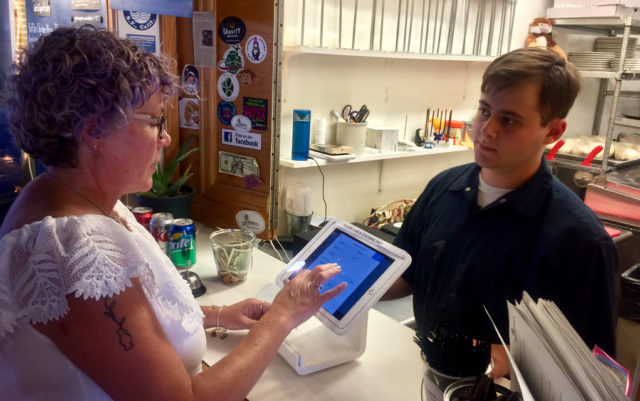 After two “bonks” on the head rendered John blind, Ham the space monkey showed up, and Sheila quit her job as a landscape architect and dyed her hair purple. Two years later, Sheila has 12 kids in the American Legion kitchen, and John spends months on secret recipes for pizza dough.

Now that’s the short story of how Gastronauts took off and became one of Boulder County’s brightest food stars. But the long story is also loaded with details that seem out of this world.

1. Sheila has a photographic memory of customers. When I meet Sheila and John at the building owned by and connected to the American Legion, which Gastronauts shares with Gravity Brewing, Sheila says hello to everyone at the bar and places her hand on each of their backs.

“I know everybody by name,” Sheila says. “I was a teacher, and I’m Irish, so I always had to remember names, and I’m really good at it. And I remember details.”

“There’re people who haven’t been in in a year and she’ll say, ‘Are you gonna have the hamburger because that’s what you had last time,’” John says.

As we sit at a picnic table on the outdoor patio, talking about how many people Sheila knows, a young couple and their dog walk by and Sheila asks how their hike went. Later, she asks me, “You had the crispy broccoli, right?” Yes, I did, but more than a year ago.

“I’ve never seen anything like it,” John, who worked as a corporate chef for decades, says. “People bring us gifts. People bring her flowers.”

“We get hugs in the grocery store all the time,” Sheila says.

2. Gastronauts only started because John went blind. Doctors had warned him he was prone to retinal detachments, and all it took was a little trauma to permanently detach them. Two “bonks” on the head, and John was legally blind in one eye, impaired in the other, and unable to work in the corporate kitchen or drive a car.

“I had no plans to retire until my vision frizzed out,” John says. “This kind of just fell in our laps. … I didn’t know about Gravity and went to a brew fest, and they gave us beer tokens, and that’s how we discovered it. We came in and had one beer and another beer and another beer. We came back and had birthday parties here. Then it popped up on Facebook that this kitchen was open.”

3. Their mascot is a monkey, and it actually means something. John and Sheila recount the story back-and-forth, trading off lines of the story without interrupting each other.

“When we knew we were going to do this, we started writing down ideas for names. They just didn’t pop,” John says.

“We wanted to have a tie to Gravity. They’re one of our core supporters, and we liked the idea of it being a simpatico thing,” Sheila says.

“As we were opening, it went back and forth.”

“We just threw everything out that we could think of. We had Sir Isaac Newton in one.”

“The tie-in of gastronomy and astronauts was perfect.”

The name was announced at the launch party, and a graphic designer friend mocked up the logo with Ham the monkey, the first monkey in space. A few weeks later, having already won a few regulars, a couple brought in something to solidify the logo.

“We had a regular couple, Scott and Becky Bartlett, the ‘Bartlett Pair.’ Her dad worked on the space shuttle when Ham the monkey was on it,” Sheila says. “So Becky brought in the T-shirt from Ham the monkey’s first visit. People have come back from the Smithsonian with space monkey apparel. Someone came back from L.A. with something else.”

4. The food is unique, approachable and unlike anything else in Boulder County.

“If we’re going to do something that’s familiar, it’s going to be best of breed,” John says.

Then there’s the pizza.

5. John spent months developing a pizza dough flour blend that mimics New York-style pizza and which he has willed to one close friend, who is not Sheila.

“It’s an interesting story,” John says. “To be a traditional Neapolitan pizzeria … you have to use this OO flour. The major brand all these chefs kept talking to me about is Caputo, and I was like, ‘Let me see what the big deal is.’ So I literally took Betty Crocker’s pizza dough recipe and used the Caputo as the flour to do a benchmark … and it’s designed for high-temperature ovens, so it doesn’t burn. And I didn’t like it at all. It doesn’t have great texture or flavor.

“It sparked in my head, ‘What are all these flours out there? What do they contribute? I made the same recipe with probably 25 different flours, and I made notes on what they brought to the party. Some of them brought bread flavor, some were cracker crisp. And that brought me to this point of everyone says, ‘New York pizza is about the water,’ and I’m looking at my notes that this one’s gonna bring the crispness of New York pizza, this one’s gonna bring the chewiness.”

John, from New Jersey, the son of a Sicilian baker, got it right. And now he’s making Sicilian thick-crust pizza that’s as good as anywhere in the country. All you have to do is follow Gastronauts on Facebook to find out when it’s available and get it before it’s gone, which is usually in a matter of hours.

“We’ve had offers for free rent,” John says. “We’ve had people approach us and say, ‘We want this at our place.’ But this our baby. This is what we do. We don’t kill ourselves. It’s common to work 80 hours a week in the restaurant industry. We work probably 45; two days off a week and not killing ourselves and putting money in the bank.

“And we take really good care of our kids,” Sheila says. “That was important to me when hiring that we pay them competitively and do whatever we possibly can.”

Sheila calls her employees, many college-aged, her kids, and I have to ask her several times if she’s talking about her biological children (she has one, who does work at Gastronauts) or kids she’s adopted in the kitchen.

“It’s a wonderful, wonderful place. I was touchy-feely in schools and getting to know my families and kids, but even the kids who work in our kitchen with us are (our) kids. We do stuff outside of work and do stuff for them,” Sheila says.

The kids seem really happy to work in the kitchen. And John and Sheila let them generate their own menu items, sometimes, as when one kid dipped the chicken wings in the shitake crisp rice slurry and created what John calls “Kentucky fried chicken wings.”

The operation is so simple and so joyous, I have to ask why it seems so rare to have such a welcoming environment, and why John and Sheila were the right ones to do it.

“In the right place at the right time,” John says.

“But it certainly doesn’t feel so serendipitous that the bubble can burst at any moment because we’ve put a lot of hard work into this, and the way we grew was really nice because we didn’t become huge right away,” Sheila says.

“I’ve never seen anything in my whole career like what this has become,” John says.

“In two years, which is amazing to me,” Sheila says.

Or, out of this world.