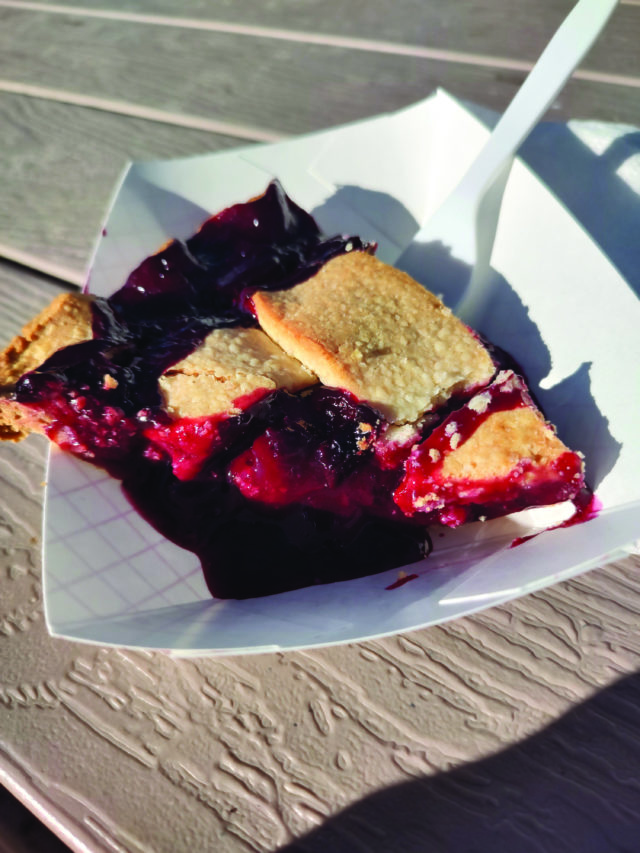 On a frigid day when I’d already ingested too much caffeine, I looked away from the menu of artisan espresso beverages at Gabee, Boulder’s Japanese-inspired coffee house on 28th Street. For something completely different, a blueberry latte was a mildly sweet pleasure with a pure blueberry flavor in a warming, soothing head of pale indigo crema. Other latte flavors include chestnut and sweet potato. Tucked in a former Quiznos, Gabee is known for the edible artwork on top of each cup. The lattes and friendliness come with an exceptional Flatirons view.

A few days later I found myself in the town of Hygiene at the Mountain Fountain Market, a source of sandwiches (like a fine chicken salad) and lots of locally produced honeys, hot sauces, and jams. Mostly, I’m there for the organic gluten-free fruit pies—lattice, crumble top and double-crust—ranging from pear, apple, cherry, and blackberry to Palisade peach in season. Other bakery faves include pumpkin, pecan (with no corn syrup), pumpkin and key lime pies, and focaccia and cinnamon rolls.

Out in the sunny, artsy side yard at the Mountain Fountain, I appreciated a slice of organic blueberry strawberry pie with a bright, intense fruit flavor. It was sweet, but not excessively, tucked in a tender, buttery, cookie-like gluten free crust.

I’ve been preaching about the benefits of convection ovens for decades, ever since I saw them in action in restaurant kitchens. Circulating the heat with a fan makes items cook evenly and more quickly.

Lately everybody has been raving about air fryers, which are just convection ovens. Coat anything in oil and put it in a convection oven set at 450 degrees and it will “air fry” nicely.

I finally got an air fryer as a gift for Christmas because I asked for a toaster oven, and now the experiments start. The first thing I made—besides superior toast—was air-fried red, yellow, and white baby potatoes that were amazingly tasty and fast.

I had Bosc pears—the long brown-skinned ones—so I consulted with philosopher Ralph Waldo Emerson who noted more 100 years ago that, “There are only 10 minutes in the life of a pear when it is perfect to eat.”

Pears are notoriously crispy until they suddenly become mushy. I quartered my hard pears and cut out the core. I sprayed them with oil and added a pinch of salt, a sprinkle of nutmeg and some vanilla extract, and air-fried them until they softened, browned and dried, which concentrates the natural sweetness. It was the perfect dessert with nonfat Greek yogurt and air-fried salted walnut halves.