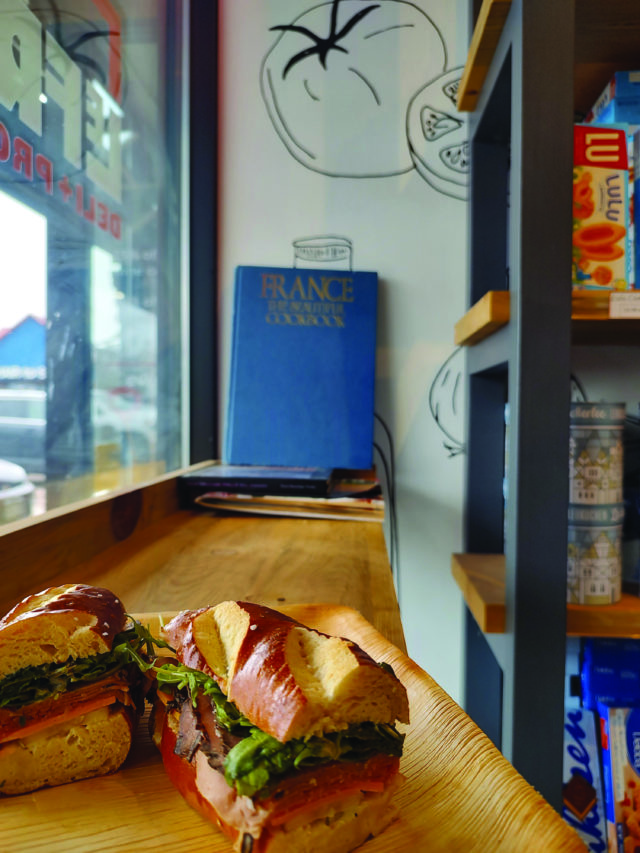 My inner child was feeling cranky after the first of the year, in need of an uplifting lunch. I wanted a singular sandwich, memorable and well-composed, with nothing excessive added for effect. That’s what I found when I finally stopped in at Le Frigo, Boulder’s French-oriented deli. The Brexit sandwich spoke to me because it starts with a soft, chewy, and malty/salty pretzel roll spread with horseradish aioli. Thin slices of tender pink roast beef (not mystery beef roll), sharp Cheddar cheese, red onion, arugula, and pickle are layered on in just the right proportions.

Other signature Le Frigo sandwiches range from the Le Frigo Royal (with Paris ham, saucisson, prosciutto, and cornichons on a buttered baguette) to the Catalan, a baguette with Serrano ham, aioli, chorizo, olives, and Manchego cheese.

Culinary preconceptions and prejudices can get in the way of tasting some mighty fine pie. Not all of Colorado’s best pies are made in diners and tiny bakeries using old family recipes. For instance, the best place to sample toro sashimi, tako nigiri, spider roll, Wagyu kushiyaki, and Maine lobster tempura in Denver also happens to be the best place to enjoy banana cream pie in the city.

Sushi Den is the critics’ perennial choice as the top Denver sushi destination and a pioneer in sourcing fresh fish directly from Japan.

Michiko Kizaki, pastry director for the restaurant, based her banana cream pie on old family-made desserts she loved growing up in Japan. The pie has been on Sushi Den’s menu for 25 years. I love it because fresh banana slices are tucked into real custard with chocolate and whipped cream. The crust is light, thin, and flaky and, in the Japanese tradition, the filling is not too sweet. Excessive sugar is often the downfall of many cream pies. It’s just right.

The lines have always been long to get into Sushi Den. Luckily, the banana cream pie is available for takeout at Sushi Den and its nearby sister restaurant, Izakaya Den.

Along with rice, lentils, flour, canned tomatoes, and dried fruit, little blue boxes of Jiffy Cornbread Mix have had a place on my pantry shelves for decades. People have praised the sweet and savory iterations on the cornbread spectrum I’ve crafted, only to be disappointed when they found out it was Jiffy.

However, I’ve never baked it according to the recipe on the box. For the loaf in this week’s photo, I drained a can of kernel corn and pureed it in a blender with an egg and some sour cream leftover from the Christmas quiche. Combined with the dry mix and baked it in a very heavily buttered glass loaf pan, the golden result was a joy when toasted and soaked in honey.

Another Jiffy fix to make cornbread moister is substituting buttermilk or coconut milk for the water in the recipe.

I could have made it “corn-ier” by adding popped popcorn pulverized in a blender or fresh or frozen kernels.

Another variation involves adding a half-cup of bacon grease to the recipe and a cup of minced green onions. It makes a nice base for eggs Benedict.

Adding a small can of chopped green chilies to the basic batter and baking it flat on a cookie sheet produces stellar spicy salad crouton cubes.

One of my favorites adds lots of minced garlic, an extra egg, freshly chopped basil, black pepper, and olive oil to the mix, baked with a heavy layer of grated Parmesan on top. It’s garlic bread with some real substance to it.

On the sweet side, Jiffy mix batter makes great blueberry pancakes with the addition of frozen wild berries, honey, vanilla extract, and Greek yogurt. For upside-down cornbread cobbler, add a layer of sliced peaches or berries to a buttered loaf pan before adding the sweet batter and baking until bubbly.